By raysongtree November 15, 2016 Elections, Everything Trump

Until people understand the new world order, we will keep thinking that funded movements for over a century are organic natural evolution involving independent players. The opposite is true. Women’s Suffrage is great example. We would have never heard of these few protestors unless the media at the time had promoted them. The media was by then controlled by Rothschilds (since the Yellow Press days of Spanish American War.)  JP Morgan bought up editorial rights to 25 leading US newspapers in 1915. The Suffragettes were funded IF they would support World War I, the opposite of their first beliefs. We can be certain they were promoted also in New Zealand, where some women are still proud to be puppets of the elite.  Guess who paid for the banner? 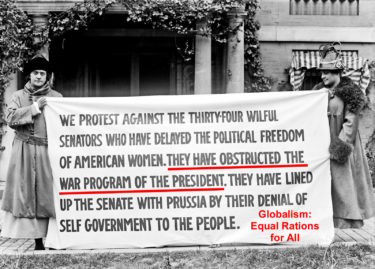 See the issues on the banner. Feminism, War, and humanitarian intervention. Globalism means Equal Rations For All.

Please take the time to listen to entire 8 minutes video below. He discloses the reasons Women’s Vote was pushed forward and goes into mandatory implanted chips that will replace cash.

Einstein,  for another example, was a plagiarist, not a Jewish genius.  “Genius” Albert Einstein was created by the Rothschilds to advance Zionism and exalt Jews.  While Jews are 2% of population, 22% of Noble prizes have gone to Jews, to promote Zionism.

All venues have been long co-opted, but the internet, while it is still free, has offered a collective perspective which is rapidly busting the conspiracy.

If someone is famous, they were placed.  “If it is covered up, it is true.”

So lets see who funded these bused in anti-trump protestors which is making headlines in the controlled media?

Earlier today we showed that, contrary to USA Today’s claims that the anti-Trump protests across the nation are “spontaneous, involving people from all walks of life”, according to Wikileaks documents at least two of the people profiled by USA Today have a history of being professional agitators for the Democratic party, whose task is to stir up popular protests and – in extreme cases – unleash rioting, such as the following clip showing the latest day of violent protests in Portland revealed.

Now, courtesy of a Zero Hedge reader, we have visual confirmation of how a substantial portion of these professional, paid protesters arrive at the site of the protest, in this case Chicago.

As our reader notes, “I have a video of 5 city blocks on the West side of Chicago lined with buses from Wisconsin (Badger Bus Lines) bringing in protestors. The Sears tower is visible in the background.”

The video was taken at 3:30pm on South Canal Street in Chicago on Saturday. As our reader points out, hundreds of the participants that took part in the downtown Chicago protests from November 12 were bused in using these vehicles. Other arrived by train.

For Videos go to link.  http://www.zerohedge.com/news/2016-11-13/blocks-anti-trump-protest-buses-caught-tape

A left-wing charity organization with unknown sources of money is providing the funding for protests around the … Anti-Trump Protests Funded By Left …
dailycaller.com/2016/11/11/anti-trump-protests-funded-by-…

Clinton And Soros Are Behind Violent Riots At Trump Rallies …

Bernie has little to do with these manufactured protests. This is a Clinton operation, … Which Democrat Do You Think Is Behind The Anti-Trump Protests?
dailycaller.com/2016/03/21/clinton-and-soros-are-behind-v…

It Looks Like George Soros is Funding the Trump Protests Just …

It Looks Like George Soros is Funding the Trump Protests Just Like He Funded The Ferguson Riots. … Anti-Trump protestors in Austin today are not as organic as they …
activistpost.com/2016/11/looks-like-george-soros-funding-t…

Some of the anti-Trump protests in the US have been organized by groups that were sponsored by Clinton sympathizer and billionaire George Soros.

Once again, George Soros is held responsible for funding protests. On this particular occasion, he is funding Anti-Trump Protests. By now, Donald Trump political …
mirrorspectrum.com/behind-the-mirror/guess-whos-funding-the-…

Some of the anti-Trump protests in the US have been organized by groups that were sponsored by Clinton sympathizer and billionaire George Soros.

Anti-Trump rallies funded by the left. … Also playing a prominent role in the anti-Trump Chicago protest, obviously expanding into a national effort, …