By raysongtree January 25, 2017 Breaking News (Educational Comments only), Everything Trump

Let’s begin with excerpts of an article from officially fake news Washington Post, once run by CIA Katherine Graham (and here) but now run by CIA and Bilderberger, Jeff Bozes.  He is also owner of Amazon which has a $600 million contract to provide the CIA with cloud computing services. (And here and here)

For those who don’t understand the CIA’s role in social engineering, check out Gloria Steinem’s long career as a CIA agent, and the CIA funding of Ms. Magazine. (I covered this extensively in Vol. 1) The CIA, under fake news Brennan was anti-Trump and pro coverup Clinton, who as a career criminal has been lying all her life. In below excerpts, CIA Washington Post promoted the Women’s March as an anti-Trump event, encouraging women to be anti-Trump after his election. Most of the women hating Trump will discover he is their best friend, if, and only if, he fulfills his promise on ending Common Core Curriculum as he kept his promise on TPP.

Excuse me. I’ve changed my mind. I’ll start this article with excerpt and images about Trumps campaign manager, you know, one of those humans who are discriminated against by “misogynist” Donald Trump.  I am a skeptic, so I have to hope she was not placed in this position as a poster child.

“Conway met Trump in 2006, when she was living in one of his buildings, according to the Washington Post. She even served on the condo board of the Trump World Tower in Manhattan. Conway recalled being surprised to find how involved Trump was– even showing up to meetings to hear residents’ concerns. Over the following couple of years, Trump would call her to say he’d seen her on TV and ask her opinion about varying issues.

“In March 2015, Trump asked Conway to help strategize for his presidential bid and even offered her a job on the campaign, but she declined. Over a year later, on Aug. 17, 2016, Conway accepted the role as his campaign manager — a decision that would alter the course of their lives, and history, forever.

“But there’s much more to Kellyanne than just politics. Conway is an outspoken woman of faith, devoted wife, and proud mother of four. Kellyanne’s husband is George T. Conway III, who as a young lawyer played a historic—and largely hidden—role in the impeachment of Bill Clinton….”   (see full article)

The Following are excerpts from the Washington Post article on Shook.

“Teresa Shook [alleged inspiration for Women’s March] never considered herself much of an activist, or someone particularly versed in feminist theory. But when the results of the presidential election became clear, the retired attorney in Hawaii turned to Facebook [CIA Facebook] and asked: What if women marched on Washington around Inauguration Day en masse?”

“Unsure of how to proceed in those initial few days, she [Teresa Shook] said she enlisted the help of the first few women who messaged … Shook said, most had an image of Clinton [the career criminal] as their Facebook profile photo.”

So most of her initial support was from sore losers that had supported Killary.

“In the District, Janaye Ingram, the former executive director of Al Sharpton’s National Action Network, has been working to secure permits…”

Caroline Rule… “I absolutely despise Donald Trump and everything he stands for,” she said.

I’ve decided to let this next article, written four days ago, complete the picture of who was behind the “spontaneous” march of millions of women who somehow all got organized to march for what, they do not know. 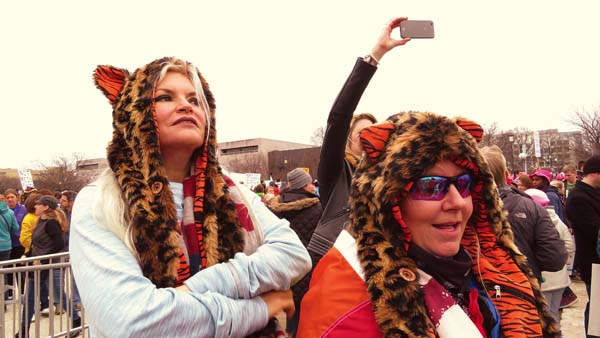 In the pre-dawn darkness of today’s presidential inauguration day, I faced a choice, as a lifelong liberal feminist who voted for Donald Trump for president: lace up my pink Nike sneakers to step forward and take the DC Metro into the nation’s capital for the inauguration of America’s new president, or wait and go tomorrow to the after-party, dubbed the “Women’s March on Washington”?

The Guardian has touted the “Women’s March on Washington” as a “spontaneous” action for women’s rights. Another liberal media outlet, Vox, talks about the “huge, spontaneous groundswell” behind the march. On its website, organizers of the march are promoting their work as “a grassroots effort” with “independent” organizers. Even my local yoga studio, Beloved Yoga, is renting a bus and offering seats for $35. The march’s manifesto says magnificently, “The Rise of the Woman = The Rise of the Nation.”

It’s an idea that I, a liberal feminist, would embrace. But I know — and most of America knows — that the organizers of the march haven’t put into their manifesto: the march really isn’t a “women’s march.” It’s a march for women who are anti-Trump.

As someone who voted for Trump, I don’t feel welcome, nor do many other women who reject the liberal identity-politics that is the core underpinnings of the march, so far, making white women feel unwelcome, nixing women who oppose abortion and hijacking the agenda.

To understand the march better, I stayed up through the nights this week, studying the funding, politics and talking points of the some 403 groups that are “partners” of the march. Is this a non-partisan “Women’s March”?

Roy Speckhardt, executive director of the American Humanist Association, a march “partner,” told me his organization was “nonpartisan” but has “many concerns about the incoming Trump administration that include what we see as a misogynist approach to women.” Nick Fish, national program director of the American Atheists, another march partner, told me, “This is not a ‘partisan’ event.” Dennis Wiley, pastor of Covenant Baptist United Church of Christ, another march “partner,” returned my call and said, “This is not a partisan march.”

Really? UniteWomen.org, another partner, features videos with the hashtags #ImWithHer, #DemsInPhily and #ThanksObama. Following the money, I pored through documents of billionaire George Soros and his Open Society philanthropy, because I wondered: What is the link between one of Hillary Clinton’s largest donors and the “Women’s March”?

I found out: plenty.

By my draft research, which I’m opening up for crowd-sourcing on GoogleDocs, Soros has funded, or has close relationships with, at least 56 of the march’s “partners,” including “key partners” Planned Parenthood, which opposes Trump’s anti-abortion policy, and the National Resource Defense Council, which opposes Trump’s environmental policies. The other Soros ties with “Women’s March” organizations include the partisan MoveOn.org (which was fiercely pro-Clinton), the National Action Network (which has a former executive director lauded by Obama senior advisor Valerie Jarrett as “a leader of tomorrow” as a march co-chair and another official as “the head of logistics”). Other Soros grantees who are “partners” in the march are the American Civil Liberties Union, Center for Constitutional Rights, Amnesty International and Human Rights Watch. March organizers and the organizations identified here haven’t yet returned queries for comment.

On the issues I care about as a Muslim, the “Women’s March,” unfortunately, has taken a stand on the side of partisan politics that has obfuscated the issues of Islamic extremism over the eight years of the Obama administration. “Women’s March” partners include the Council on American-Islamic Relations, which has not only deflected on issues of Islamic extremism post-9/11, but opposes Muslim reforms that would allow women to be prayer leaders and pray in the front of mosques, without wearing headscarves as symbols of chastity. Partners also include the Southern Poverty Law Center (SPLC), which wrongly designated Maajid Nawaz, a Muslim reformer, an “anti-Muslim extremist” in a biased report released before the election. The SPLC confirmed to me that Soros funded its “anti-Muslim extremists” report targeting Nawaz. (Ironically, CAIR also opposes abortions, but its leader still has a key speaking role.)

Another Soros grantee and march “partner” is the Arab-American Association of New York, whose executive director, Linda Sarsour, is a march co-chair. When I co-wrote a piece, arguing that Muslim women don’t have to wear headscarves as a symbol of “modesty,” she attacked the coauthor and me as “fringe.”

Earlier, at least 33 of the 100 “women of color,” who initially protested the Trump election in street protests, worked at organizations that receive Soros funding, in part for “black-brown” activism. Of course, Soros is an “ideological philanthropist,” whose interests align with many of these groups, but he is also a significant political donor. In Davos, he told reporters that Trump is a “would-be dictator.”

A spokeswoman for Soros’s Open Society Foundations said in a statement, “There have been many false reports about George Soros and the Open Society Foundations funding protests in the wake of the U.S. presidential elections. There is no truth to these reports.” She added, “We support a wide range of organizations — including those that support women and minorities who have historically been denied equal rights. Many of whom are concerned about what policy changes may lie ahead. We are proud of their work. We of course support the right of all Americans to peaceably assemble and petition their government—a vital, and constitutionally safeguarded, pillar of a functioning democracy.”

Much like post-election protests, which included a sign, “Kill Trump,” were not  “spontaneous,” as reported by some media outlets, the “Women’s March” is an extension of strategic identity politics that has so fractured America today, from campuses to communities. On the left or the right, it’s wrong. But, with the inauguration, we know the politics. With the march, “women” have been appropriated for a clearly anti-Trump day. When I shared my thoughts with her, my yoga studio owner said it was “sad” the march’s organizers masked their politics. “I want love for everyone,” she said.

The left’s fierce identity politics and its failure on Islamic extremism lost my vote this past election, and so, as the dawn’s first light breaks through the darkness of the morning as I write, I make my decision: I’ll lace up my pink Nikes and head to the inauguration, skipping the “Women’s March” that doesn’t have a place for women like me.

Asra Q. Nomani is a former Wall Street Journal reporter. She can be reached at asra@asranomani.com or on Twitter.