You Have An Opinion, You Arrogant Creep!

By raysongtree January 27, 2017 letters and essays (Educational Comments only)

According to New Age thought, we are all one, so anything goes, all is love, don’t ridicule anyone, don’t denounce anything or anyone, don’t confront anyone because you might hurt their feelings, build respectful dialogue with conquistadors that want to decimate your way of life, be nice, get lots of likes….

And if someone such as myself actually shares a view that cuts to the core of corruption and says something is wrong, that is called being arrogant, rude, disrespectful, because I am not singing the song Imagine by John Lennon.

If I expose a new age fraud like Deepak Chopra and I call him a fraud, well,  “Ray is hateful.”

I want people to shun him, shun his thinking, denounce him, and if he wakes up, that is great, as long as he shuts the F up.

If I expose liberal thought as social engineering, I am being “hateful.”

I have had radio interviews with New Age radio hosts that could not handle real issues. Feelings were more important.  “Don’t make me feel because I want peace.”  Okay, I won’t use the g word genocide, or the m word Monsanto, or the T word “your taxes.” Okay, lets talk about having an abundant day!

I realize that righteous indignation can be called hateful.  I do hate pedophiles, satanists, and polluters, and I am still purchasing packaged food, which means I am a polluter.  I don’t like that, and I don’t love it, and I am critical of myself.

Incrementally, but never fast enough, we need to change our ways. Those who have the most ancient lifestyle are going to survive the longest, is my view. Ancient works, experimental doesn’t.

I recently was told this… “Ray, you have gone from being insightful, to arrogant, judgemental, rude and destructive. You revel in a confrontational style of communication that is unkind and unproductive. I am soon to unfriend you. Your goal is to agitate me and others.”

She is very incorrect. I have no interest in agitating anyone!  If I tell the local utility that their technology will cause cancer, it is not a personal attack. But yes, I am judging their choices as wrong, I want to destroy their ignorance and willingness to harm, but I am not reveling in calling a spade a spade.

Now, if I named the person above who judged me so harshly, would that be a personal attack or the truth?

I won’t because she has to stew in it herself.

The  tall poppy story is that if you put your head up above others you will be called arrogant and get your head cut off.  If you are a crab that gets to top of bucket, the other crabs will pull you down.

I am not arrogant because I know there is no top to bucket. I will always be learning, but those who pull me down are just enabling the status quo and being politically correct.

There is no way she will understand what I just wrote.  There is a reason she won’t invite me to her radio show. I might offend someone!

I told her she doesn’t understand what New Age means. It means being neutralized. 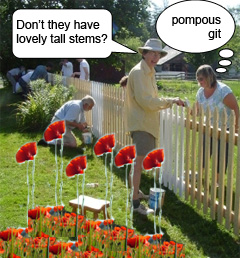