Peace on Earth will be provided by Big Brother if you just let go of your boundaries, your sovereignty, your personal and cultural identity, your unique faith, and stop judging anything!

I cover the New Age Operation in other essays, but here, let’s take a look at New Age Roth-efeller minion Deepak Chopra’s deep commitment to working with the New World Order.

(Below is screen shot, not a live video link.)

All readers must know that the United Nations was created by Roth-efellers after World War II. Following the Napoleonic Wars they tried to unite Europe with the Congress of Vienna in 1815. That failed because Czar was wise. After World War I they tried the League of Nations 1921. Finally they achieved their format for a one world government that will bring Peace on Earth.  See Ben Gurion quote below. They just need to keep sponsoring more wars to scrape the canvas clean and keep rebuilding THEIR way, again and again, until people give up and have no religious or national identity. (Here is link to my Youtube video connecting all these dots.)

committed father helps too, so free sex girls! Mimic the slut behavior of Hannah Montana, oops, Miley Cyrus!  It is called destabilization. It is allowing rapist Muslim immigrants to destroy Sweden. The goal is civil war which Big Brother will end with “unity.”

Scraping the canvas clean and rebuilding is also a long-term purpose of forced immigration into Europe, in order to out-number locals (example – London) and create a mixed up non-traditional race within 2 generations. It is intentional destabilization, founded on New Age “compassion.” We won’t need a national identity, a religious identity, a homeland, rather, we can be enlightened like Chopra. “One Giant Mind,” (that thinks like Chopra). (See George Patton quote end of article. Patton was eliminated because he had integrity and didn’t follow globalist orders,  )

“We are all one” means one world government. Just as Rothschild funded Karl Marx, they have funded the New Age “unity” message. Chopra is welcome at UN. He fits in perfectly.

Chopra is a big fan of Obama, no matter what Obama does. By now the reader must know that Barack Obama is a third generation CIA Manchurian candidate.  Please examine photo of his alleged father being greeted by his Grandfather to be before his alleged father ever met his mother. What? Was it an arranged marriage. Yes, it was! In photo, Barack’s parents hadn’t been matched yet by the CIA. There is the arranged husband of Grandpa Dunham,  to right of Obama Sr. covered with flower leis, the CIA operative grandfather of Barry Soetoro. (CIA agent and trainer Frank Marshal Davis, was the actual father of third generation agent Barry)

Deepak Chopra not only supported Obama in first election, but after Obama destroyed Libya and murdering innocent Gaddafi (who made possible the end of apartheid in South Africa, said Mandela), Chopra raised funds for war criminal Obama’s 2012 re-election. He was really motivated. War crimes, no problem… Can’t be judgemental, right?

I did a search for “Deepak Chopra GMO, Monsanto.” He has said nothing in 4 years. He recently wrote an article about AI, and said nothing about how Artificial Intelligence will devastate society. But that is New Age denial. Can’t draw any lines and bring up controversy! Can’t disturb peoples’ sleep.  Chopra advocates addictive bliss of love. And in keeping people asleep, the UN loves him.

.
Now (June 2016), Chopra is complaining about Trump, who has the audacity to want borders where only legal immigrants can enter!  Legal!  How dare he!  Non-divisive New Age peace-niks will shout rabid condemnation if you express an opinion that something might be, OMG, wrong. The curse you will hear with dagger eyes is “YOU ARE BEING JUDGMENTAL!!!!”

.
Thinking someone else might be right or wrong is taboo of course, if we are to have one world unity. However, not being New Age politically correct will bring about the New Age curse.  It appears that Donald Trump is so politically incorrect, that fake guru Deepak Chopra had his emotionally immature buttons pushed.  So out comes the emotionally mature curse.
.
““I would never say this unless I believed it was 100% true, but he [Trump] represents the racist, the bigot, the one who’s prejudiced, the one who is full of fear and hatred, the one who represents emotional retardation of a three-year old,” he said

Tuesday. “And yet he’s so popular because he’s given permission to our collective psyche to express their darkest demons . . . [Like wanting home rule?] He’s full of fear. He is angry. [OMG, that is taboo!]  He has a lot of hatred. He pouts, he’s belligerent, he’s emotionally retarded.”
To left we see Trump being endorsed by Ben Carson. (Jan 2017 – New HUD Director.) Hatred?  Racist?  For Chopra the problem is simple… Trump thinks some things are wrong.

Chopra wrote that Trump has brought out the “shadow” in American politics—the “dark impulses” inside everyone, including himself. (Oh my!)

Let’s ask, in terms of maturity in looking at issues such as whether immigration laws should be respected or ignored, who is a retarded? Donald Trump or Deepak Chopra?

“What I said just now, I would never say these things about anybody,” the guru confessed. “It’s not like me. [I’m usually very cool and detached from the real world of issues like right and wrong.]  But he’s bringing out the worst in me, because I, too, am fearful of what would happen to the United States of America and the rest of the world if, God forbid, he became President.”

To see real darkness, read the quote below. You may need to enlarge image. 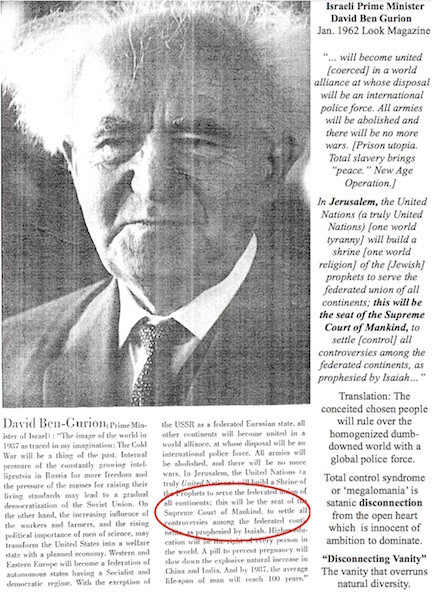 And here is the supreme court building in Jerusalem for the one world government, mentioned in 1962 by Ben Gurion, already built and ready to go.  Perhaps Chopra can do a yoga conference here?  It is an Illuminati temple. Unity! And since Trump is a Zionist, maybe Deepak Chopra will snuggle up to him.

“If everyone is thinking alike, someone isn’t thinking.”  – George Patton