Is Infertility The Solution?

By raysongtree April 19, 2017 letters and essays (Educational Comments only)

It will likely cause fright when more people realize that “growth” is going to give way to contraction, as exploitable resources dwindle.  However, most people will be too busy reacting to other crisis to consider the long term predicament.  While unemployment will rise, so will infertility.  Let’s look at this.

I used to think that the future was predictable because of logistics, but now I think it is predictable because of the elite. Rather than slowly starve, I think we can expect more wars, not between nations in conflict, but arranged by the elite as mutually necessary.  The alien agenda will survive unless there was resistance by the elite, which is doubtful. The alien agenda is “evolution” toward Smart cities, human implants, total control.  The alien agenda may even include changing the ability for biology to continue on Earth as machines are built to maintain machines.  For those who don’t understand term “alien agenda” I am speaking about fact that our technology was channeled through certain people, or just back engineered from space craft to give us integrated chips, fiber optics, and more.  Back engineering is real.

Also, just to remind, wifi, glyphosate, radiation and vaccines are going to change fertility.  It is not just cancers, it is the lack of ability to reproduce, that will reverse population growth. In response, to insure reproduction, it will be considered superior to use test tubes, not relationships between people who know their own gender.  That was purpose of gay/trans operation.  Most students starting in elementary school are now taught blurred gender.  The new norm is to be blurred. This is not conjecture, it is happening now.

Therefore, for me, the new age and galactic operations, which continue to give people idea that “higher consciousness” will save day, are just distractions from what is happening to soil, water, our bodies.  For these people, reality is not real, only what we think about reality is real.

When I chose soil science as my major in school, a friend who was studying psychology could not understand why anyone would study soil.  For him that wasn’t real. What is in our heads is what was real to him, and I feel this is what is real to our modern, so called progressive society.

Male infertility rate on the rise in Shanghai

SHANGHAI: In an increasingly mobile and competitive world, even one’s manhood is under threat. Forget about grooming or making more money. It’s time men started watching out for their sperm.

Experts say at least 100,000 men in Shanghai are suffering from infertility, because of the ever-worsening environmental pollution as well as unhealthy lifestyle under higher work pressure. 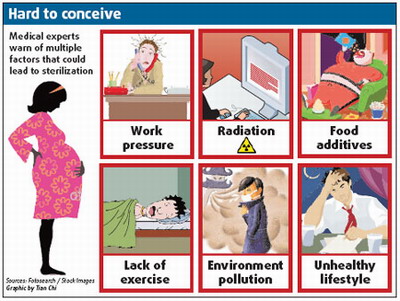 Radiation from cellphones, computers and other electronic devices, air, water and food pollution, combined with the sedentary lifestyle followed in cities are to blame for a possible “quality decline” of the sperm, which may, in turn, lead to men’s poor reproductive capability. Li Zheng, a urologist from Shanghai Jiao Tong University affiliated Renji Hospital, told China Daily yesterday.

He said he had observed less sperm motility in men’s semen and even some change in the sperms’ morphology over the years, which may affect successful conceptions.

“About 50 percent of failures to achieve pregnancy is due to an abnormality or possibly an absence of sperm in the male partner’s semen,” Li said.

“The social significance of such a problem is obviously very huge. Since many of today’s young couples are the only child of their parents, they are under pressure from their parents to have children.”

Across China, an estimated 8 to 10 percent of the reproductive population is now experiencing problems having children, Li added. Li, also director of Shanghai Sperm Bank, said the number of couples wanting to have children through artificial insemination is on the rise, although the number of donated sperm is not enough to meet the demand.

The rate of a successful sperm donation is only 1 to 2 percent, said Li, adding that in the bank’s more than five-year history only 1,000 or so people qualified as donors, who have to be “both physically and mentally” healthy.

But sperm donation is still seen as a social taboo, the reason why Li has been encouraging more people, especially college students who are more open to new ideas, to do what they can to help.

“It’s for public good,” said Zhang Wei, a postgraduate student who works with Li at the sperm bank. “Think of those people who are unable to have children. They really need help.” Li also thinks that men should be more aware of preserving their sperm before any potential threat affects the quality. He advised people with testis cancers, firemen and astronauts, as well as those involved in occupation in radiology, to extract and conserve their sperm for future use.

I noticed this headline on China’s rising unemployment.http://www.reuters.com/article/us-china-economy-unemployment-idUSKBN17L137

China’s cabinet said on Wednesday that risks of mass unemployment in some regions and sectors have increased and pledged more fiscal and monetary- policy support to address the potential rise in the jobless rate.

The government plans to cut further excess and inefficient capacity in its mining sector and “smokestack” industries this year, part of efforts to upgrade its economy and reduce pollution, but the move threatens to throw millions more out of work.

The State Council said China faces “intensified structural conflicts” in its current job market, but it must place employment as a top policy priority and address the new challenges to keep its employment rate stable.

China’s official unemployment rate – which only accounts for urban, registered residents – has held around 4 percent for years, despite a slowdown that has seen growth cool from the double-digits to quarter-century lows of under 7 percent.

In a guideline post on its website that sets the policy tone on employment issues, the State Council said provincial governments in those regions should take measures such as increasing the stipend for firms under job-shedding pressures.

“If new urban jobs shrink or jobless rate jumps, (China) should step up fiscal and monetary policy support,” it said.

The government will continue to encourage entrepreneurship and help small enterprises thrive as key ways to create more jobs, by building more start-up industrial parks and incubation bases, along with more tax policy bonus for start-ups.

University graduates and workers from sectors affected by capacity cuts such as steel, coal, and coal-fired power were identified as “key groups” that needed extra support, the guidelines said.

Data from the Ministry of Human Resources and Social Security showed 7.95 million students are expected to graduate from university this year in June, 300,000 more than in 2016.

Graduates will be encouraged to diversify their employment options, such as working in less-developed countryside areas and working for small enterprises. China will also appropriately reallocate affected workers, it said.

Beijing aims to create more than 11 million jobs this year, 1 million more than last year’s target, according to this year’s government work report.