Snowden’s Faith in Progress and ET connections with “Progress”

By raysongtree December 9, 2016 letters and essays (Educational Comments only)

Snowden Interview Dec 7  At minute 8:30 we learn that  Edward Snowden is mentally controlled by controlled media, and he believed the New York Times prediction about Hillary win for President !

I was dumb struck. He thinks their polls were accurate!  And as of the interview, still doesn’t know that polls were rigged, and that NYT, owned by Sulzberger family (Zionists-Rothschild) is entirely a social engineering rag. No one can ever trust New York Times.

Snowden and interviewer are discussing what main stream news fed them!  Snowden has less savvy about the hidden hand then ourselves!

At minute 20 he thinks there is such a thing as a fair trial. I don’t.  He is part of dominant culture all they way.  I part with that.

For me, nothing this civilization has done has been positive, and it was all set up for one thing, to get to “singularity” which is anti life.   So Snowden is still a believer in “progress” which he repeats several times.

Now let’s leave Snowden and return to this idea of “progress.”

People don’t seem to understand that the Constitution was a Freemason invention to keep the top of the pyramid in control while harnessing the creative power of the masses. A major change agent for Freemasonry was Francis Bacon who wrote King James Bible and the Shakespeare plays in early 1600’s.  I’m saying this “genius” was an alien plant.  This might be new for some people.  The Constitution was just a step in the “transformation” from aristocracy to eventual technocracy, which the outside alien non-organic force knew it wanted all along….

I have to keep reminding my friends… The integrated chip came from 1947 Roswell hand me down from ET.  Craft were not “shot down.” They were handed down. And it keeps happening. And the secret second space program is not for us, it is for them.  This civilization, from Moses to Google has been shaped by an outside force.

Col. Corso says he handled the farming out of ET tech. One of the people on this email list had a brother who worked on ET back engineering at NASA.  It is very real and cost this person his life. This civilization we are living in is ET and has developed for many thousands of years to get to this point. The purpose is not for us, it is for them. Humans are the donkeys for this effort.

I tried to check if  Col. Corso was correct about stating integrated chips came from back engineered space craft, but this information would not be publicly available.  I did find this on always redacted wikipedia, that a Geoffry Dummer,  at top secret level of UK military, announced the integrated circuit.  Corso was not wrong, as back engineering is real, and why would Corso lie about it?

In 1944 Dummer had been made Divisional Leader of the Physical & Tropical Testing Laboratories and the Component Group, which placed contracts with industry for new components and materials. His interest in components grew out of his experience with radar. “They were the bricks and mortar, and many of them were not as reliable as they should have been”, he said. Out of his drive for reliability came the search for new techniques and methods of construction. Together with Dr A. C. Vivian he made the first plastic potted circuit in January 1947 to protect components from shock and moisture. Printed wiring methods and etching techniques were explored, and their use encouraged in radar equipment.

In May 1952 Geoffrey Dummer read a paper at the US Electronic Components Symposium. At the end of the paper he made the statement:

“With the advent of the transistor and the work on semi-conductors generally, it now seems possible to envisage electronic equipment in a solid block with no connecting wires.[1] The block may consist of la 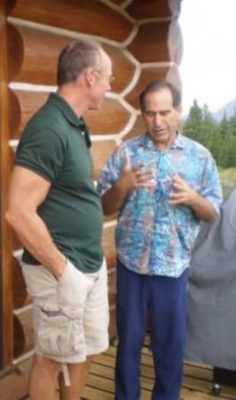 yers of insulating, conducting, rectifying and amplifying materials, the electronic functions being connected directly by cutting out areas of the various layers”.

This is now generally accepted as the first public description of an integrated circuit.

Reminder. Ben Franklin – electricity 1751.  Electricity, the most enslaving and nature destroying invention ever on this planet….  Franklin incarnates eventually (103 years passed so there is one or two other lives in between) as Yogananda to melt east and west. Yogananda incarnates as Dr. Steven Greer to bring globalism in the name of efficient ELECTRICITY.  (I have confirmed this rebirth with Greer personally.)

From the Cover of his book “The Day after Roswell”.

A landmark expose firmly grounded in fact, THE DAY AFTER ROSWELL puts a fifty-year-old controversy to rest. Since 1947, the mysterious crash of an unidentified aircraft at Roswell, New Mexico, has fueled a firestorm of speculation and controversy with no conclusive evidence of its extraterrestrial origin–until now.

Colonel Philip J. Corso (Ret.), a member of President Eisenhower’s National Security Council and former head of the Foreign Technology Desk at the U.S. Army’s Research & Development department, has come forward to tell the whole explosive story. Backed by documents newly declassified through the Freedom of Information Act, Colonel Corso reveals for the first time his personal stewardship of alien artifacts from the crash, and discloses the U.S. government’s astonishing role in the Roswell incident: what was found, the cover-up, and how these alien artifacts changed the course of twentieth- century history.

In 1961 Corso, then a lieutenant colonel, was given command of one of the Pentagon’s highly classified weapons development budgets and was made privy to the U.S. government’s greatest secret: the dismantling and appropriation of the Roswell extraterrestrial spacecraft by the Army. Now, identifying all those involved, Colonel Corso reveals how a deep-cover council officially discounted all UFO reports to the American public, and cleared the path for his R&D team at the Pentagon to analyze and integrate the Roswell artifacts into the military arsenal and the private business sector. The extent of the operation is startling.

With unprecedented detail, Corso divulges how he spearheaded the Army’s reverse-engineering project that “seeded” alien technology at American companies such as IBM, Hughes Aircraft, Bell Labs, and Dow Coming-without their knowledge. He describes the devices found aboard the Roswell craft, and how they were the precursors for today’s integrated circuit chips, fiber optics, losers, and super-tenacity fibers. He also discusses the role alien technology played in shaping geopolitical policy and events: how it helped the United States surpass the Russians in space; spurred elaborate Army initiatives such as SDI, Horizon and HARP; and ultimately brought about the end of the Cold War.

Laying bare some of the government’s most closely guarded secrets, THE DAY AFTER  ROSWELL not only forces us to reconsider the past–but also our role in the universe.

Another key understanding is that the invention of “agriculture” was not the start of guerilla farming,  but the coming of SLAVE agriculture to benefit the elite who were “the gods” – who were aliens.  If that is stretch, keep thinking about it and you will see it. Slave agriculture and top/down cosmology came together, not by coincidence.  We are mind programmed by religion to give away our power to others.