My comments on this article.  Wow.

What a crazy article to be floated by infowars.  Dig a big hole, line it, fill it with water, add fish and feed them.  Is there an unlimited number of fish you can keep in one pond or not?  What if the food you feed them happens to come from crops that poison the soil and use irrigation water from dammed rivers that cause extinction of salmon?  What if the waste from your pond goes into water table? What if we are not talking fish, we are talking humans. What a fricking joke that this article is so ecologically illiterate that he uses GDP to justify more population!  When the bubble pops and people are starving, will he blame it on politics? Yes. But you and I know a pond cannot have unlimited fish, and if you don’t control the numbers, the fish will suffocate in their own waste, or you will run out of food and many will starve.  It is this ecologic illiteracy at infowars that is the only real fault, in my opinion.  Only a globalist would take an inventory of Earth and divide it into rations for unchecked billions.

Inferno and the Overpopulation Myth

The previous movie adaptations of Dan Brown’s books (Angels and Demons and The Da Vinci Code) were a success, and I expect Inferno will do well in theaters, too.

Langdon is a professor of symbology whose puzzle solving skills and knowledge of history come in high demand when a billionaire leaves a trail of clues based on Dante’s Inferno to a biological weapon that would halve the world’s population.

The villain, however, has good motives. As a radical Malthusian, he believes that the human race needs halving if it is to survive at all, even if through a plague. Malthus’s name is not mentioned in the movie, but his ideas are certainly there. Inferno provides us an opportunity to unpack this overpopulation fear, and see where it stands today.

Thomas Malthus (1766–1834) thought that the potential exponential growth of population was a problem. If population increases faster than the means of subsistence, then, “The superior power of population cannot be checked without producing misery or vice.”

Is overpopulation a problem?

The economics of population size tell a different, less scary, story. While it is certainly possible that some areas can become too crowded for some people’s preferences, as long as people are free to buy and sell land for a mutually agreeable price, overcrowding will fix itself.

As an introvert who enjoys nature and peace and quiet, I am certainly less willing to rent an apartment in the middle of a busy, crowded city. The prices I’m willing to pay for country living versus city living reflect my preferences. And, to the extent that others share my preferences or even have the opposite preferences, the use and construction of homes and apartments will be economized in both locations. Our demands and the profitability of the varied real estate offerings keep local populations in check.

But what about on a global scale? The Inferno villain was concerned with world population. He stressed the urgency of the situation, but I don’t see any reason to worry.

Google tells me that we could fit the entire world population in Texas and everybody would have a small, 100 square meter plot to themselves. Indeed, there are vast stretches of land across the globe with little to no human inhabitants. Malthus and his ideological followers must have a biased perspective, only looking at the crowded streets of a big city.

If it’s not land that’s a problem, what about the “means of subsistence”? Are we at risk of running out of food, medicine, or other resources because of our growing population?

No. A larger population not only means more mouths to feed, but also more heads, hands, and feet to do the producing. Also, as populations increase, so does the variety of skills available to make production even more efficient.  More people means everybody can specialize in a more specific and more productive comparative advantage and participate in a division of labor. Perhaps this question will drive the point home: Would you rather be stranded on an island with two other people or 20 other people?

The empirical evidence is compelling, too. In the graph below, we can see the sort of world Malthus saw: one in which most people were barely surviving, especially compared to our current situation. Our 21st century world tells a different story. Extreme poverty is on the decline even while world population is increasing.

Hans Rosling, a Swedish medical doctor and “celebrity statistician,” is famous for his “Don’t Panic” message about population growth. He sees that as populations and economies grow, more have access to birth control and limit the size of their families. In this video, he shows that all countries are heading toward longer lifespans and greater standards of living.

Finally, there’s the hockey stick of human prosperity. Estimates of GDP per capita on a global, millennial scale reveal a recent dramatic turn.

The inflection point coincides with the industrial revolution. Embracing the productivity of steam-powered capital goods and other technologies sparked a revolution in human well-being across the globe. Since then, new sources of energy have been harnessed and computers entered the scene. Now, computers across the world are connected through the internet and have been made small enough to fit in our pockets. Goods, services, and ideas zip across the globe, while human productivity increases beyond what anybody could have imagined just 50 years ago.

I don’t think Malthus himself would be a Malthusian if he could see the world today.

WRONG, If he were here, Malthus might notice that 90% of forests, wetlands, fisheries are all gone and that we are technically in overshoot and a huge die off is imminent.  Duh!

Below from the Glossary of Vol 2, Lipstick and War Crimes Series

33. Resource depletion refers to the fact that easy-to-extract resources have already been stolen
from indigenous people, and now all resources will be harder to find, and more expensive to
bring to market.

(The reader must remember that all of Africa, Americas, Australia and the Pacific are indigenous
peoples’ land, not the land of the occupiers presently abusing these lands and holding
it at gunpoint. All these lands were taken illegally by criminals in the last 500 years. The occupiers
have no ancient language rooted with the land. They don’t know the land and don’t
intend on ever knowing it. They are just using it up as fast as possible.)

People using aerial surveys which map underground formations with low frequency technology
without permission, see the people living in that area, not as real human beings
worthy of respect. So now, underground resources, not apparent before, are being sought
after, and anyone in the way will be destroyed.

All resources will become increasingly unavailable every year for the rest of human history.
This reality was coined as “Peak Everything” by Richard Heinberg (who presciently
endorsed the Transition Towns movement which was a response to Peak Oil research). We
have reached the peak on all mineral and resource extraction and are now in a new era of
permanent decline. 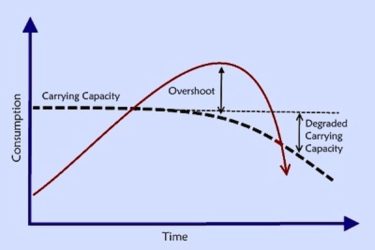 In the graph above, the population peak (red) has not come yet, while the resource extraction
peak, which for humans translates as carrying capacity, has. This period of too many
animals or people or plants, that over reproduced when times were fat and resources were
plentiful, to then in their numbers, face resource depletion, is called overshoot. In nature,
species that face overshoot always face a population crash, as the red line shows. Lots of
death.

As demand goes up and supply goes down, prices will increase, and that means more poverty.
We are now entering increasing poverty until demand (population) decreases at the
same rate as the decline of resources. (The reader can ask whether population will decrease
from crisis or informed choice? How will the latter be organized without alert, informed
sober people?) The only populations who will not have to experience continual downsizing
of consumption will be the indigenous peoples who know how to be self-sufficient without
the industrial supply chain. Their lifestyle represents the stable life that humans had before
the past 200 year bubble of cheap energy that led to overshoot. Their way is also our future
lifestyle, when all the ripoff experiments from cheap energy end.

A point will come when some resources will remain in the ground because they are too
expensive to extract. Production must be seen as the key limit, not underground reserves
that are 10 miles beneath the surface and might seem endless. So what? We cannot afford
to bring them to production. And those who tout “free energy technology” for extracting
anything from anywhere do not realize the impact this will have.

However, there will be no societal or population collapse as many Peak Oil researchers and Deep
Ecologists predict. The collapse is already being managed by the Illuminati Globalists. A
controlled demolition of society as we know it, involving sanctioned diseases is already in
play. GMO, Wireless, and vaccines are well known vectors for reducing life expectancy.

Infertility is increasing, and it is orchestrated.