Zuckerberg, the Kauai Hypocrite, Aims for World Mono-culture with Internet Drones and Satellites

Facebook’s virtual technology is helping make the next generation become even more lost in virtual fantasy…  Meanwhile,  placed puppet Mark Zuckerburg has large acreage on Kauai to get away to somewhere real.

Zuckerberg bought 700 acres for $100 million on Kauai.  (Facebook was CIA takeover of My Space.)

“Zuckerberg is actually scheduled to deliver a keynote address to MWC attendees Monday, presumably to address Internet.org and Facebook’s struggles to bring affordable [censored] Internet to poor places around the world…”

It means, to invade indigenous areas with agenda driven mono-culture and prepare all peoples for “unity” under One World Government.

Diversity requires isolation, not connection. Kids who grow up with access to internet will have little experience of their home traditions. The real goal of communications is to speed up centralization.

In February, India’s telecom authority banned Facebook’s Free Basics – a service that provided free mobile internet access to select web services – because it violated net neutrality. FB Board member Marc Andreessen subsequently embarrassed the company in a series of tweets that appeared to suggest  he believed India was better off under British colonial rule.

That is, he liked it better when India was under more globalist control and couldn’t question anything.

From the horses mouth….

Mark Zuckerberg:  “Pretty soon we’re going to live in a world [one world, one mono-culture under one centralized control] where everyone [no opt out] has the power [menu option] to share and experience whole scenes as if you’re just there, right there in person,” Zuckerberg says. “Imagine being able to sit in front of a [virtual] campfire and hang out with [virtual] friends anytime you want. Or being able to watch a movie in a private theater with your [virtual] friends anytime you want. Imagine holding a [virtual] group meeting or event anywhere in the world [creating virtual relationships that replace real interaction] that you want.  All these things are going to be possible. And that’s why Facebook is investing so much early on in virtual reality [and virtual sex]. So we can hope to deliver these types of [non] social experiences.”

Zuckerberg is thus claiming that Facebook will change the world because this is better for world. He will decide this for others. He will decide what others think is needed to bring them into an unreal dumbed down virtual reality,  because he is globalist into conquest, while he retreats to places that are real, like Kauai.

Kauai developed new first strike missile and is home of GMO testing farms. Perhaps if everyone had virtual head sets, people could ignore these realities.

AI Helps Facebook’s Internet Drones Find Where the People Are

A group of Facebook engineers has spent the last two years building satellites, drones, and lasers that can bring Internet access to all those people on Earth who don’t already have it. But none of this will work unless the company can first figure out where those people are. And that requires a little artificial intelligence.In the spring of 2014, Facebook launched its Connectivity Lab. The idea was to build all sorts of new technologies that could more efficiently stretch the Internet to the rest of the world—and thus stretch Facebook to the rest of the world. But this is no simple thing. Building a flying Internet drone—a contraption that can circle the stratosphere and beam wireless signals down to Earth—is an enormous undertaking, in terms of time, technology, and money.

‘It changes, fundamentally, how our communications systems have to be developed.’ Yael Maguire, Facebook

[continued…]… In they end, they can build a vast map of human artifacts with a resolution of about 5 meters. In other words, they pretty much known whether there’s evidence of human life in every 5-square-meter space across 20 countries. Then, by combining this information with census data, they can map the population density in those countries. And that’s a powerful thing.

Previously, Maguire and his team assumed that each drone would blanket an area with one large cone of wireless signal. But Facebook’s AI-enhanced map shows that this doesn’t make sense. “It changes, fundamentally, how our communications systems have to be developed,” Maguire says. He won’t yet say how the company intends to modify its drones. But the basic idea is to build wireless radios that allow the company to directly target human populations, rather than just cover an area with one giant cone of signal. “The cones should be much smaller. Ideally, they should be shaped to be just where the people are,” he says. “Actually, it’s not really a cone anymore.” So, now that it knows exactly where the people are, Facebook must build its satellites, drones, and lasers in a new way.

Facebook has revealed its first full-scale drone, which it plans to use to provide internet access in remote parts of the world.

Code-named “Aquila”, the solar-powered drone will be able to fly without landing for three months at a time, using a laser to beam data to a base station on the ground.

The company plans to use a linked network of the drones to provide internet access to large rural areas. However, as with its Internet.org project, Facebook will not be dealing with customers directly, instead partnering with local ISPs to offer the services.

Jay Parikh, Facebook’s vice-president of engineering, said: “Our mission is to connect everybody in the world. This is going to be a great opportunity for us to motivate the industry to move faster on this technology.” [Connecting everyone means erasing sovereignty.] 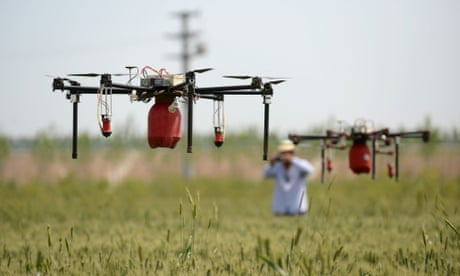 Facebook said it would test the aircraft, which has the wingspan of a Boeing 737, in the US later this year. Yael Maguire, the company’s engineering director of connectivity, said that the plane will operate between 60,000ft (18km) and 90,000ft (27km) – above the altitude of commercial airplanes – so it would not be affected by weather. It will climb to its maximum height during the day, before gliding slowly down to its lowest ebb at night, to conserve power when its solar panels are not receiving charge.

Although Facebook does not immediately face policy or legal hurdles in testing its drone in the US, Maguire said, it was the first company to fly at such altitudes and had a team working with policymakers to help set guidelines.

The drone, which was built in 14 months, was able to fly in the air for 90 days at a time, Maguire said. Lacking wheels, or even the ability to climb from ground level to its cruising altitude without aid, it will be launched with the help of helium balloons, which will rise it to its preferred height.

The balloons will be easily capable of lifting the plane: even when fully laden with communications gear, it will weigh just 880lbs (400kg), less than a fifth of the recognizable Reaper drone used by the US military, even though the Aquila drone has a wingspan of 46 yards (42m), compared to the Reaper’s 16 yard (15m) breadth.

Because the planes must constantly move to stay aloft they would circle a two-mile (3km) radius, Parikh said.

The Aquila program, which was first tested in Britain in March this year, is geared towards bringing internet access to the 10% of the population who do not have it.  [The last isolated and independent cultures will be destroyed]

It faces competition from a similar programme developed by Google to bring wireless internet to rural communities using high-altitude helium balloons. The programme, called “Project Loon”, involves fitting transmitters to the balloons, which will fly at similar altitudes to Facebook’s drones.

Unlike the drones, the balloons cannot be directly steered, but Google claims that, with an accurate enough model of wind speeds and directions, it is possible to effectively direct the balloons simply by raising or lowering their altitude to ensure they blow in the desired direction. Project Loon was first tested in New Zealand in 2013.

Separately, Facebook a year ago launched Internet.org, an initiative to provide access to the two-thirds of the world without a reliable connection. [But is is not to the open internet, see below.] The project, which partners with local mobile carriers to offer free internet access on basic smartphones across Asia, Africa and Latin America.

But Internet.org has also been criticised by activists in both the developed and developing world for only linking users to a walled-garden version of the internet. Internet.org customers can access, for free, selected services such as Facebook, Wikipedia, weather, job listings and government info. But they cannot access the open web through the same service.

In May, Tim Berners-Lee, the inventor of the world wide web, suggested that users “just say no” to services such as Internet.org.

He told the Guardian: “In the particular case of somebody who’s offering … something which is branded internet, it’s not internet, then you just say no. No it isn’t free, no it isn’t in the public domain, there are other ways of reducing the price of internet connectivity and giving something … [only] giving people data connectivity to part of the network deliberately, I think is a step backwards.”

Facebook CEO Mark Zuckerberg struck a bitter tone in his response to the explosion of the SpaceX rocket carrying a satellite intended for use on his Internet.org project in Africa.

Writing on his Facebook page, Zuckerberg said: “As I’m here in Africa, I’m deeply disappointed to hear that SpaceX’s launch failure destroyed our satellite that would have provided connectivity to so many entrepreneurs and everyone else across the continent.”

The accidental explosion of the Falcon 9 rocket early on Thursday morning – referred to as an “anomaly” by SpaceX engineers – destroyed both the rocket and its cargo: the AMOS-6 satellite, which Facebook had planned to deploy to provide internet coverage to parts of Africa. [See above in red, it was all of Africa]

“Fortunately, we have developed other technologies like Aquila that will connect people as well,” Zuckerberg added. “We remain committed to our mission of connecting everyone, and we will keep working until everyone has the opportunities this satellite would have provided.”

Contrary to Zuckerberg’s description, the satellite did not belong to Facebook. In October 2015, Facebook partnered with Eutelsat, a French satellite company, to lease the broadband capability of the AMOS-6, which was built by Israeli company Spacecom. 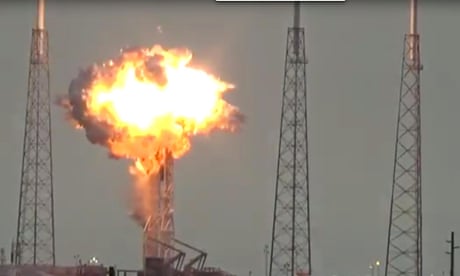 According to Space News, which reviewed Spacecom filings with the Tel Aviv stock exchange, the joint lease cost $95m over five years and included a provision requiring Spacecom to purchase an insurance policy specifically covering Facebook and Eutelsat’s risks, in addition to its own insurance. Space News also reported that both Facebook and Eutelsat would each have additional insurance policies for the satellite.

SpaceX did not immediately respond to a query about its own insurance policies.

The tone of Zuckerberg’s response to the explosion was immediately interpreted by many as a sign of a grudge against SpaceX CEO Elon Musk.

The two billionaires cut markedly different swathes through Silicon Valley. In recent years, Zuckerberg has appeared intent on projecting an image of a philanthropist concerned with connecting the earth’s citizens. [Destroying cultural firewalls]

Musk is better known for his eccentric pronouncements and preoccupation with technological moonshots.

The loss of the satellite is just the latest setback for Zuckerberg’s Internet.org, which aims to expand internet access across the globe. The program has long courted controversy by communities who view the free services on offer as a possible Trojan horse for Facebook’s business interests.

In February, India’s telecom authority banned Facebook’s Free Basics – a service that provided free mobile internet access to select web services – because it violated net neutrality. Board member Marc Andreessen subsequently embarrassed the company in a series of tweets that appeared to suggest he believed India was better off under British colonial rule.