By raysongtree May 22, 2015 Jewish, letters and essays (Educational Comments only)

By the way, in my opinion, all pride is false. I will go through claims made in your video one by one. Interestingly, the video doesn’t mention that Israel is the number one subsidized country in the world. I wonder why this wasn’t mentioned????

Is Israel 60 years old?
History of zionism and importance of infamous Jacob Frank, who is mentioned in letter by George Washington 1798

In fact, the founder of Israel was Edmond Rothschild. Here is the Israeli coin
and here is their coin showing “greater israel” and why Syria and Iraq are being destroyed… as listed in 2001 by Gen. Wesley Clark

Greater “Eretz” Israel, as planned from the outset to replace Middle East nations and Islam.

Here is true history of how Palestine was stolen and possession arranged during world war II by 1917 Balfour Declaration, 31 years before “independence” of Israel. There are tons of other documents and youtubes.

Hitler was the illegitimate grandchild of Rothschilds

Rothschilds funded both sides of World War II. Wall Street funded Nazis. Standard Oil owned by Rockefeller (who got their initial capital from Rothschilds and intermarried with them) is same as IG Farben and not one of Farben factories in Germany were bombed. Allies were controlled, as British empire was Rothschild creation. NATO is continuation of their ‘New World Order” control. They financed British colonialism, and intermarried with royalty.

The Noble prizes are fixed to select Jewish and Swiss winners by the Rothschilds who control both countries. The bank of international settlements which organizes all of the Rothschild Central banks is in Basel, Switzerland. Swiss banks funded Hitler, stole the jewish gold fillings from the murdered jews and everything else they owned, funded Lenin. etc. “Swiss bank account” means money laundering. Switzerland is also where my sensei was murdered, Kobun Chino Roshi, so he wouldn’t influence Steve Jobs, also murdered.

Here you see can directly how fixed the selections can be … Behind the 2009 Nobel Peace Prize, by Thierry Meyssan

then you can read this The Jewish Bias of the Nobel Prize – Biro, Jan C. – MD …

The Academy Awards and entertainment industries are owned by Jews. 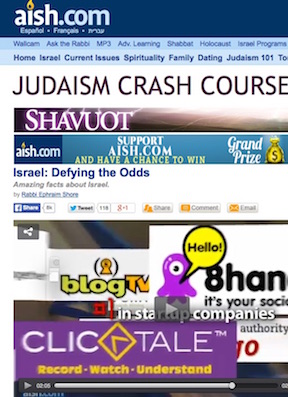 The net gain in trees and agriculture in Israel mentioned in video is from stealing water, which will be unsustainable, by the way.

INCREDIBLE, AT MINUTE 2:03 the three corporate logos shown are 1. all-seeing-eye-in-keyhole, 2. one eyed all-seeing-eye mascot, and 3. Pyramid. All these companies are Illuminati owned. Rothschilds. See image to right. Just before that was another one of guy with hands over his head in pyramid and another with 666. The fact that these particular logos were chosen and grouped together shows the video itself was Illuminati production.

At minute 2:13 claim that Jewish indigenous people (who slaughtered the indigenous Canaanites) returned to Israel after 2000 years and (displaced through terrorism, people who had been there 1000 years), when in fact almost NONE are indigenous people from that area, semites, but are light skinned Ashkenzi jews from Khazar Kingdom!

( I, Ray Songtree, am an Ashkenazi Jew.)

Justice in Israel is impossible.