The liberal big tech companies are trying to defeat Trump in midterm elections with censorship.  Twitter is leading way with censoring individual accounts. That is, Twitter is now officially a partisan platform.

Twitter says that criticizing democrats is now hate speech, but not other was around.  If a twitter user names another twitter user who spreads the NPC meme as fascist, that is fine with Twitter.

New application of rules by Twitter say that individuals who agree with Infowars or Natural News or hundreds of other conservative/whistle blower news outlets (already banned by big tech) cannot be allowed to spread the NPC meme!
The liberal media failed with their Stanford CIA mind control expert, Prof. Ford at Kavanaugh hearing, to stop Conservatives, and the disgraceful Democrat behavior back fired, driving Republican’s to next Red Wave.
What will be backlash to trying to ban the NPC meme?  It will just get energized. 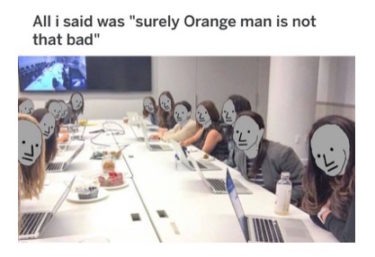 Zero Hedge was one of the 200 outlets listed as fake news by the CIA Graham/Bezos Washington Post.
…a new meme suggesting that liberals are soulless idiots who can’t think for themselves has gone viral. The concept compares Democrats to “nonplayable characters,” or NPCs – the recurring characters in video games with repetitive lines and limited knowledge. Lack of an “inner voice” is a dead giveaway that someone may be an NPC.
What is the NPC meme?  See zero hedge link and BBC article below…
(link) https://www.zerohedge.com/news/2018-10-16/4chan-sparks-mass-triggering-npc-meme-twitter-responds-ban-hammer

Why has Twitter banned 1500 accounts and what are NPCs?

The Trump-supporting right has a new favourite meme and it’s being shared far and wide to troll their political opponents.

The trolling campaign was born out of the characterisation of liberals as automatons incapable of independent thought on areas of Reddit and 4chan.

In 24 hours there were more than 30,000 uses of the term NPC on Twitter, and Facebook pages dedicated to the trend have amassed tens of thousands of followers.

So what is an NPC?

Non-player characters (NPCs) are controlled by the game’s artificial intelligence rather than the player. As a result, they’re limited to certain scripted responses and actions.

In a 2016 post on 4chan, one anonymous user referred to people “who autonomously follow groupthinks and social trends in order to appear convincingly human” as NPCs.

“If you get in a discussion with them it’s always the same buzzwords and hackneyed arguments,” the poster wrote.

“It’s like in when you accidentally talk to somebody twice and they give you the exact lines word for word once more.”

In recent months the term has been adopted enthusiastically by right-wing social media users. It’s frequently used interchangeably with social justice warrior or SJW as a catch-all term for their political opponents.

The character “is often used as a reaction image to represent feelings such as melancholy, regret or loneliness,” according to Know Your Meme.

The modification of Wojak’s face to replace his emotive expression with a crudely-drawn, generic blank expression has become one of the most popular visual representations of the meme.

As well as Wojak, images of prominent liberals were also modified.

Colin Kaepernick, the American football player whose refusal to stand during the playing of the national anthem to protest against police violence on African-Americans drew heavy criticism from President Trump, is among them.

How has it spread?

As the term became more widely-used, a group of Reddit users on one of the most vociferously pro-Trump corners of the internet hatched a plan.

When some of the accounts started tweeting false information regarding the upcoming mid-term elections, Twitter took action to suspend a number of the accounts.

Well Twitter, clearly, since it has suspended profiles set up to spread them. And many conservatives are upset by that action.

Plus what looks like a row over a meme sits in the broader context of ongoing culture wars. Trump supporters complain liberals denigrate them all as fascists or Russian bots. Liberals are angered by their mass characterisation as snowflakes or NPCs.

The Trump-supporting right has proven itself adept at spreading memes online.

Researchers from University College London who analysed a huge database of memes discovered the 4chan message board /pol/ and subreddit r/The_Donald were particularly effective.

“We find that /pol/ substantially influences the meme ecosystem by posting a large number of memes, while r/The_Donald is the most efficient community in pushing memes to both fringe and mainstream web communities,” the study’s authors wrote.