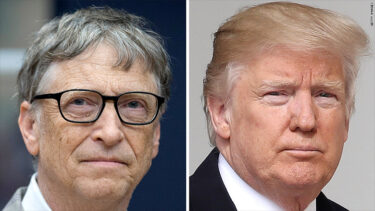 I am once again struck by Trump’s blindness. No one can tell me now that this is Art of War.  I don’t trust him.  What is the difference between Trump’s vaccine and Bill Gates vaccine???  Read entire article please.

“Trump said that the vaccine will be provided by Pfizer free of charge.

In July, Pfizer struck a $1.95 billion deal with the federal government as part of Operation Warp Speed, in an effort to deliver 100 million doses of the vaccine. The money was part of an advance-purchase agreement, meaning Pfizer did not accept government money for vaccine development, unlike other frontrunners Moderna and Astrazeneca. Instead, the money will go toward the manufacturing and distribution of the vaccine.”

“After Pfizer surfaced with positive early findings on its coronavirus vaccine candidate last week, experts were hopeful another effective vaccine would follow given similar gene technology, or the so-called messenger RNA (mRNA) platform. The new technology, which is being used by Pfizer and Moderna, injects the genes for these “spike proteins” into healthy cells to induce an immune response.”  [It is a GMO vaccine forever altering your DNA, and who knows what else is in vaccine. We are NEVER told.]

And see this, that Gates is indeed involved with Moderna.  Thus, Trump is pushing a Gates vaccine.  A GMO vaccine.
https://fort-russ.com/2020/05/exposed-bill-gates-funding-partnerships-and-moderna-americas-tangled-vaccine-web/