Tourism on Kauai: The Mirage of Success

The two things the dominant culture / base of pyramid won’t admit…
1) the whole civilization is a mistake, and 2) it is unsustainable.

Just think that we celebrate the beginning of the American Holocaust,  Columbus Day.

And these mistakes are based on idea that this civilization is immortal! The dominant culture thinks they are taking part in something divine !!!!!

We are discovering that this civilization, which began some 6000 years ago with metal and slavery system agriculture,  has an off planet source that created all the dominant religions and supremacy that now controls our thinking.

Example… we don’t want to be “dirty” because earth is bad and heaven is good.  So it is better to sterilize everything and pollute the water table to produce our sterilizers! Why, because we are headed for the “stars” (because Earth sucks).

And because some 4 billion people live indoors, they think the outdoors is an abstraction ! They think the virtual life is real,
and the natural life is imaginary!  Why not, nature is just a color enhanced image on their phone.

So the best thing the Earth can do to stop the indoor people, is cut off the cities, and this is guaranteed because of resource depletion.

My concern is how long the disconnection will propagate itself.  As far as the Earth, we don’t matter. But in terms of human culture and our responsibility to be somewhat sane, disconnection does matter.

Now I will share what paradise on Kauai is like…. I am surrounded by tourist industry and am part of it.  Tourists are consumers who arrive using polluting technology and are here to extract.  They give nothing but money which further destroys island. The more “tourists” the more growth, the more destruction, the less indigenous, the less natural.  Oahu is f–ked, Maui is another California, and Kauai is getting there very quickly as  clueless urbanites fly here to gasp for the natural.  2000 cars drive to end of road, 4 miles from my house, every day and turn around because there is no parking.  On Kauai we see giant trucks and SUV’s owned by locals, bigger than anything ever seen in say, New Zealand. Huge. It is just fat. It is fat at the expense of the land somewhere else. So what I see everywhere is over consumption, conspicuous consumption, and a glimmer of resistance.  2 miles away is Waipa where local culture and agriculture are taught. 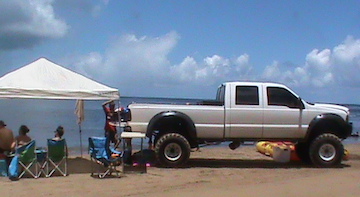 I went on bike ride this AM.   My daughter wanted a hot chocolate.  We went over consuming.   The coffee shop lady and everyone else, including my daughter and I, were wearing industrial clothing that is destroying the land somewhere. The shop girl wore jewelry, same destruction.   If I strip the young woman and cut her hair in my mind, she is just another person with ovaries. She is not pretty. She is not fashionable. She is just human.  But I have to do that to remember that I am looking at a mirage, and that I am surrounded by unsustainable over consumption and attitude and that normal is not normal at all. It is insane. It is suicide.  So I am surrounded by suicide.  Our bicycles were made in China probably. So I have contributed to the pollution of Earth Mother.

When I go to the beach, I see decadence. Some people see normal-ness.  I see over consumption and cluelessness.

Now I see cellulose in thongs accepted as normal. This is the new fashion.  In these women’s heads they are being sexy.  In their heads. What anyone else thinks doesn’t matter. Two years ago there were very few thongs on beach.  But the culture of everyone was changed by the banksters who control all corporations. We are to become more and more careless and less and less considerate.

I call this virtual value system, “disconnecting vanity.”  Now, these women not only don’t care, they have willful ignorance. That is, they will defend their choices no matter what.  It is willful.  “I can do anything I want because I am free,” when in fact thongs were not in fashion two years ago. So they are in a herd of fashion, but think they are independent and above criticism. That they are ignorant of how they appear to anyone else is one thing. That they would defend it is another.  Now lets’ use this phenomenon as a telling metaphor for the entire civilization and it’s attitude.

The photo to right is our civilization complete with the attitude.  Seeing is believing.  If you think this is the exception, come to Kauai and see our civilization for yourself.  Actually, don’t. Stay home and make your homeland beautiful.

The collapse is already here.  College graduates can’t find jobs. It is here. AI and outsourcing and unrestricted immigrants will insure that their chances of finding a job will worsen.

Tourism has a sunset. Then night.

I may not survive the poverty and strife that comes to Kauai when tourism ends, which could happen quickly. For 9/11,  tourism ended, but then came back. This time, because of economic decline due to resource depletion, there will be no return.  So poverty is coming.  I probably won’t survive the strife if things happen very rapidly, but my daughter will.  She is the right color and the right sex. My job is to make sure she is capable and not dependent on the machine that is going to run out of parts, energy, and market.  Progress will become unaffordable. Most people are in denial and can’t see this.

The two things the dominant culture / base of pyramid won’t admit…
1) the whole civilization is a mistake, and 2) it is unsustainable.

In Hawaiian, the living environment is called “aina” or “that which feeds us.”

The aina will be here, not the tourists.

For those needing a less colorful and more academic glimpse of the realistic future, see this paper, “A Critique of Techno-Optomism.”