Ray Songtree on Channeled Entities and War in Heavens

By raysongtree October 19, 2017 letters and essays (Educational Comments only)

Letter from a friend…

Where can I read more of your take on (cough, gag) “channelled’ entities? I read some of the links. It all sounds so cheesy, no one offers any evidence whatsoever of any claim. This is why Adi Da [Free John] is so important. He cuts through this junk and takes out the garbage. So many people believe this stuff, it’s hard to know where to start. I basically say, show me the evidence. Claims are supposed to arise from events, not hearsay, conjecture, theory, wishful thinking.

This sounds like good opportunity to expose delusionist Free John.  Yes, many people believe anything from the other side. Not very discerning, but there is, yes, another side, or as genius Derrick Jensen notes, “other sides.”

I’ve met with 6 or 7 channeled entities.  Let’s see if i can remember them all.

The first was El Morya channeled through someone named Janice who had lived once as Helena Blavatsky.  That was probably 1979 in Bellevue WA.  About that time I

The “light” comes from above. Wrong! The light of reality comes from the organic complex of mother Earth.

saw some videos of Ramtha, channeled by J Z Knight. Just a few years ago I met someone who knew Ramtha personally and had spent a lot of time with him. That person had a brother who worked at NASA on back engineering space craft and the brother was hunted down and murdered because he knew too much. The man I met didn’t like when I pointed out that Ramtha is Illuminati.

Then I think, the next experience was a former Chinese person who was very clear and humble. I asked Lee Chang about my last life, which was not who I thought it was. More later. That Chinese personage was channeled through a woman in Seattle area. I could see he had lived in Central China. He was impressed that I could see that.

Then there was a channeled entity on Maui who did a talk before an audience.  I was about 39 I’ll guess. I was very aggrieved at that time, in my life of serial heartbreak because my culture was promiscuous and put sex before courtship. So I was very devastated and heart broken once again, and the entity, before starting his/her talk before audience, noticed me sitting in audience and addressed my loss. At my level of waking up, my aura is quite noticeable to those on other side. They protect me, like they protect so many truthers.  (When I travel in Asia, people see me. In west no one does. There I am deep, here I am strange.)

Also on Maui there was a Brazilian man who would blind fold himself on stage, and with only a red lig

ht, so no colors were visible in case the blind fold was a trick. He would take about 30 seconds each, to produce master piece art. One of the channeled artists was Monet. The piece produced was a bit like painting, but only purple color, like black and white, only it was purple and white.   It was a woman with a hat. The Brazilian channel sold the art at end. He had a large easel with large paper. He would slap the paint on, and rip the paper off, and a new entity would step in and start slapping paint. It was feverish. He said the entities had no sense of time but enjoyed the contest. Someone was timing each painting with a stop watch and announcing it to audience and the entity. It was a game for them. The styles and quality were each completely unique,  all done blind folded. Mind blowing and exquisite. I appreciated Monet after that. Here is another Brazilian who does similar channeling.

Then there was a woman who channeled a Native American Medicine man.  I think his name was White Eagle. (Not this Masonic Zionist garbage)  That was in Methow Valley, WA where I lived for almost 20 years. That entity immediately knew that I knew about my past lives, and like a lot of other people react with me, he just started spilling the beans.  He rambled non stop for one hour. I just listened. He was very happy to have my ear. His main point is that everything and every life is simply an expression. That might be true from his viewpoint, but is disrespectful of the organic food chain and the importance of form. See, these vain beings who obtained meaning through experiencing form somewhere, then discount form when they no longer have a body.

The last entity I met through a channel, was a few years ago in New Zealand.  A woman channeled a group of entities, and three of us asked questions. One of we three is on this email list and he will read this.  We started with “the highest” who was not interested in dealing with conflict, so another entity stepped into the channeler’s body. The hierarchical supremacism of these entities/people made me combative which I don’t regret. It was practice  for my coming work,  more on that later. I understand that detached clarity is progressive, but it doesn’t or shouldn’t have to be accompanied by conceit.

The most famous channeler we know about is Moses. The Sanskrit system was channeled.

Bob Dylan, made famous by the all-seeing-eye machine to help subliminally infect us all.

Mohammed and Joseph Smith were channels for Koran and Book of Mormon. Is that enough evidence?  A student of Sufism I met says some of the Sufi tradition was channeled. He thinks it came from “the divine” which I gag at.  Bob Dylan channeled his lyrics through a demonic force, as do many Illuminati ritual satanic artists.

That should be enough evidence once you realize that all non-indigenous lifestyle is channeled artificiality….

We will never put other dimensions under a physical microscope to examine, measure, categorize or scientifically understand. I’m amazed that Free John was so vain and puffed up that he didn’t have clarity to intuit other dimensions….. Apparently he spreads his blindness through his “teachings.”

IMO, Free John is full of sh-t, and Muktananda agreed. But Muktananda had problems too.

I thought I had lived as Yogananda, but I had lived as Gandhi. Lee Chang says we had been friends.  Free energy utopianist Dr. Steven Greer thinks he lived as Jefferson, but that was me, and he had lived as electricity monster Ben Franklin.  Greer is a globalist. Franklin and Yogananda, worked also as globalists, transforming for ET. I was a globalist too, but have extracted myself and am going native. Gandhi was an Illuminati puppet. He was placed. He met Blavatsky (El Morya) in London. Gandhi’s handler and lover was Jewish Hermann Kallenbach, another Rothschild jackal. Gandhi, like Churchill, FDR and Mao, etc  (almost all politicians) was controlled through blackmail.

If you ever meet a channeled entity in person, they have super human capabilities. Morya can enter a persons mind and read it. He tried that with me. It is how he sees. But I had already had my awakening experience and can be outside my own chatter box, so I was seeing him too. We were both silent, so I said telepathically to him, “Well! I do love you!” He freaked.

El Morya last lived some centuries ago as a prince or king in Hindustan. He was and is a spoiled ass. El Morya “guides” UN (which means he is working with satanic entities who guide Roth-efellers) and is part of “Great White Brotherhood,” as is Ramtha, but they don’t use that name now, for obvious reasons.  It simply wouldn’t be politically correct !

Another member of that club was P F Sarkar, founder of Ananda Marga. I’ve made more peace with him. We will have big talk when I pass away. When he was alive, he didn’t like Gandhi.  He said Gandhi incarnated as an animal as punishment for destroying Hindustan. (See, there is disagreement in visions for future.) That idea about an animal incarnation wasn’t true. Gandhi reincarnated in a body that had Tay-Sachs, water on brain, and died young. That was my mom’s first child, who died young. But I wanted to be with my mom and dad who I knew from past lives. She lost another child same way. That might have been me also. So PF Sarkar almost got it right. We have conversed since. He wanted me to become celibate a few years ago, but I couldn’t pull it off, no pun intended 🙂

I used to be a part of all that egotistic celestial terra-forming by these so called ‘ascended” realms. I was at signing of Magna Carta for example.  After I leave this body, my real work will begin as I rub the destruction of Earth in the faces, hearts, souls of whole realms of ascended egos.  They are the cause of humans looking UP instead of touching the Earth. Alex Jones still does this BTW.  The divine is not better, it is wrong to think anything is “better!”

Many of these channeled beings are actually astral projections of people from races who have lost their planets and live “immortally” on space platforms. They suck on organic planets to keep their vain artificial immortality. Some are many many millions of years old. Others are many billions of years old. They are TERRIFIED of taking a new life because all they live for is their own vain grand selves.  If they took on a new birth, they would have to give up what they think they know. My knowledge, my knowledge, me, me, me. They make everything bend around their immortal vanity. So there you have the definition of Satan.

They are the source of destruction, putting self above any context. The “war in heavens” is quite real. As I say, there is only change, and only friction and only competition and only war. Static peace, stasis, has never, and will never exist anywhere. It is endless change forever… sorry to all those people who salivate for “heaven.”  Heaven is actually just escapism.

I think we should seek responsibility and rebirth, not escapism.

After I leave this body I am going to kick kick kick ass.  These “other sides” people are the cause of creating hell by worshiping heaven.  IMO.    They need to see how their fear of rebirth plays out as abuse.  Incarnation is “lowly” for those who worship “the divine.” So why not use up a world and destroy physical life?  Why not?

These channeled entities need to ask this and see how they really feel, being responsible for destruction. 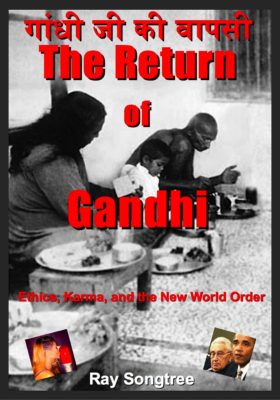 Yogananda and Gandhi sharing a meal together ~ 1935