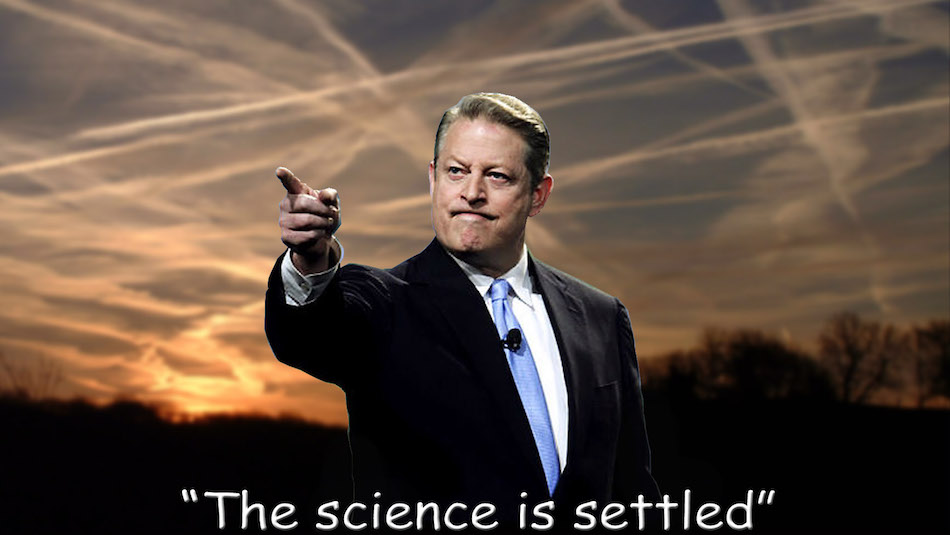 I’ve explained to you before:

I trained in science: geology/physical geography. Some of my friends are scientists. We concur that global weirding/climate chaos is happening, along with peak everything and The 6th Mass Extinction. We’re also sceptics re chem trails. In the big collapse picture, chem trails are a side show I choose not to bother with. I’m personally more concerned with the crap industrial “civilisation” is pumping into the atmosphere, like water vapour, particulates, and probably a 50 gigaton methane bomb as the permafrost goes to shit around the North Pole.

Regardless of who set up The Club of Rome (or not), once I understood the limits to growth, I understood that the game in play is finite. I personally don’t like Al Gore. He’s pretty fucking rich/conservative, don’t trust him.

I do trust the work of William Catton and his book ‘Overshoot.’ IMO this is a very important book, a must read.

I have been yelling/screaming about the nuclear power plants and nuclear weapons ever since I resigned from the NZ Army and became a peace activist. I trained in NBC warfare in the Field Engineers. I know way too much about this shit to not be silent. I joined other ex-military activists and lobbied the NZ government hard to try and stop our involvement in GW2 in Iraq, and in Afghanistan. We sent in a bunch of scientific reports, papers, articles on the US use of DU (depleted uranium), explaining that entering those war theatres was extremely risky to NZ military. We were ignored.

I witnessed my twin brother die of a heart attack at the age of 9. He was born a blue baby with hole in the heart. The most common birth defect from radiation exposure is hole in the heart. This was most probably caused by the big atmospheric hydrogen bomb test carried out by the British in South Australia in Sept 1956. A big cloud of radiation came across the Tasman Sea and covered NZ…it was at the height of the Cold War, and most here either didn’t know about it, or insisted we needed to back Britain. When I asked my mother if there were a lot of blue babies in the brand new specialist heart hospital at Greenland in Auckland, she said there were a lot of blue babies. Hole in the heart was a very rare condition pre 1945.

I was on the research team for ‘What A Way To Go: Life At The End Of Empire’…released in 2007, still very much bang on as far as I’m concerned:
https://www.youtube.com/watch?v=NNDgXJR7DsY

You can bet that some folks will be aligned with the Satanists, or owned by them. Maybe that’s who Al Gore is. There are a whole bunch of others yelling about climate chaos/global weirding who are not aligned and much harder to control. The mainstream news song is aligned with a specific agenda, and is a power&control game…for the benefit of TPTB.

Thanks for taking time to explain all that. I didn’t know about blue babies and I’m sorry that grief was in your past. You are hardwired for protest.

I saw video “what a way to go” years ago.

I understand overshoot and so do the controlling globalists. I don’t need to read more, I get it, but that is what Limits to Growth wrongly addressed. The problem is not industrialization, it is the consumerism that make industrialization attractive. It comes down to temptation. When Native Americans on Great Plains were offered light weight canvas, they dropped buffalo skin tipis. The first item of trade in Northern Territories was mosquito nets, industrially made.

The globalists/ aliens know ALL about overshoot, and that is why the globalists and deep state push depopulation which is already here. Wifi is being rolled out world wide to sterilize, not the kids now, but their children who will be sterile. No grandchildren! It is here. Plus all the other poisons so that now one in fifty American kids have “autism.” Etc.

Elana Freehand says that vaccines, GMO, and chemtrails are the main vectors of nano agents. Chemtrails are not a fringe subject.

The globalists (a singular future for every human on Earth) understand overshoot! Bill Gates, his grandfather Frederick Gates was attorney who created Rockefeller Foundation… Bill Gates is all about overshoot/depopulation. No one should be screaming about peak anything, because depopulation is already here. The only reaction to Peak Everything (all resources will now decline in affordable assessablity) of merit to me, is permaculture, prepping, and being a Ludite. You understand that and I respect that a lot.

I respect that Gandhi dragged his spinning wheel to jail. (He was an illuminati placed minion, his handler was Jewish Herman Kallenbach, who was also his dom lover. Gandhi was controlled asset, controlled by shame. He delivered a unit called “India” to the UN, and now “India” just lost its currency, on the way to being chipped. Thank you saint Gandhi.)

Al Gore was caught with a brief case of blood. He is a satanist, the real deal. (The purpose of satanism is to sabotage conscience, and the technique for the sabotage is temptation and addiction. That lack of conscience are real live puppets, with no sovereignty within. Like soldiers who can kill anyone they are ordered to kill, satanists are desensitized by habitual pedophilia and can be used by alien intent to destroy anything in the way of global tyranny.) The hockey stick graph of CO2 in atmosphere was skewed, and has been debunked.

The global warming models are built on fake NOAA data. NOAA ia associated with NASA centered in Langley with CIA. NASA collects much of the data and gives it to NOAA. NOAA and paid off scientists then spin the data. NOAA has been exposed, but your friends don’t know about that. Their data is crap. Training in science based on false data is not truth.

(CIA is the Rothschilds, as Allen Dulles was their attorney for Treaty of Versailles)

I’ve been to Andes and Himalayas, and glaciers are disappearing. Mountain climbers in 2010 didn’t like Everest because it was now a hike, not an ice expedition.

But other planets are warming. It has nothing to do with CO2.

Knowing that climate change is a solar event, the controllers didn’t want to waste a good crisis, so global warming/overshoot is the excuse for Agenda 21 and Agenda 2030, so that people will accept top/down population control. The key mind seed is top/down.

Everyone will be trained to agree there are too many people, and young people won’t want kids (that is already here too), and won’t be sad they are sterilized. They will also accept cloning as a new necessary norm, since people have become sterile. That is the plan. Clones.

1984 and Brave New World were alien channeled announcements, not fiction. (The most famous channelers in history were Moses and Mohammed)

Most “modern” Hollywood programmed people (CIA was behind Playboy and Ms. Magazines) now think the purpose of sex is for pleasure, not reproduction, so who needs gender, let’s get rid of that too.

But it is worse that that.

Anyway, what good is science based on NOAA bullshit? Your friends are decieved.

An example that proves climate change is fake are the false flag extreme weather events using HAARP and more recently, Directed Energy Weapons (DEW). The murderous California fires were DEW created and blamed on “CO2” global warming. Since it is fake, they have to sell it with false flag attacks. What more proof do you need that the global warming idea is a big lie?

Ted, as I see it, we are surrounded by thousands of years of deception. Because you are close to frontier in New Zealand where indigenous people just 200 years ago were free, and I also, from California and Hawaii, we are aware that a sustainable indigenous culture was and is possible. Eurasians don’t know about this, and neither does East Coast USA.

You and I are just a few generations away from a stone age land. Half of humans are now urban Homo indoorsians. The rich will never wake up, and neither will those who only know artificial dependency. So, those like David Icke who are exposing deception, don’t get it. An awake consumer is an oxymoron.

To be awake we need to participate and produce, not just be a tourist, a spectator, a leech.

Being awake is not “consciousness” it is lifestyle. It is choices that impact others and the Earth. I know you know this.

I am pushing back against the lies in Genesis. I’m finally on the way to a simple lifestyle without electricity and running water.

My kids are tied into tech as a normal and expectation. My daughter, age 12 now, says she hates camping. WTF! Her mom is a clueless clean freak wannabe rich consumer. She grew up poor in Philippines, working her ass off with parents making copra in fire pits, but now she has a big mortgage and a new million dollar house. Yet it is in vain, and I intend to have a camping lifestyle and my daughter will see why. I’ve told her again and again that she will live to see empty stores and I will tell her in a few years, that that means starvation and lots of murder.

But I may be wrong. Maybe sterilized masterbaters will be the last generation of humans and there is no biology in future.

In my study, I know Buddha as a deprogrammer who deligimatized Brahmanism, and Jesus as someone who took down Judaism and named the Synagogue of Satan.

King Soloman’s Temple (Now Dome of Rock) was an alien made structure, of pre pharaoh construction.  The “Atlantis” of past, as evidenced by impossibly carved giant stones all over world, was an alien connected civilization. Just as Sanskrit is an alien language, so too was ancient stone monuments.

The global civilization that moved giant perfectly cut stones was an industrial civilization with power tools of unknown configuration. King Soloman’s Temple my ass. Anyway, Buddha and Jesus, as deprogrammers and protestors, are my heroes.

Whenever I read anything that discusses global warming ala fake news NOAA, I roll my eyes. That was my reaction to your article.

Our civilization hates the Earth. Our lifestyle IS THE PROBLEM. We want to go to stars, as we have imbibed the irresponsible parasitic alien homeless joy ride ideal.

Quite different than the Hopi understanding.

So I remember my two heroes, and now I am 66, the same age as Roger Stone, who is vilified by Saturday Night Live, who has exposed Hillary Clinton, the satanist murdering wife of rapist Bill, son of Winthrop f–king Rockefeller.

I plan on incarnating next in a family living stone age or as close to it as I can find. But before that I hope I can wake up at a deeper level.