My Chemtrail articles and (second link) will show how this covert trillion dollar operation for 20 years is used to ionize atmosphere for better frequency generation, and we are being convinced by globalist organization like banks, to think it is normal. RF (HAARP) transmissions over the Prince Edward Islands can be seen in the image above. 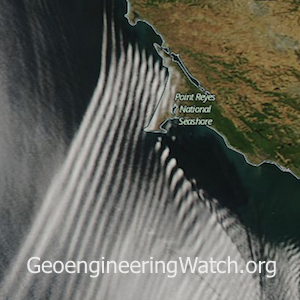 As the saying goes, a picture is worth a thousand words. The photo images shown below were captured from NASA satellite sources, they are truly alarming. These images provide shocking and undeniable proof of the ongoing global climate engineering/geoengineering/sol ar radiation management assault on our planet and its life support systems. Highly toxic heavy metals and chemicals (that are systematically sprayed into our atmosphere from jet aircraft as part of the geoengineering/SRM programs) are manipulated with extremely powerful radio frequency signals. These signals are transmitted from countless locations around the globe from various types of transmission platforms (ionosphere heater installations like HAARP, SBX radar, NEXRAD, etc.). The impact of the microwave transmissions on cloud formations is profound and highly visible (square cloud formations are created under some scenarios). In the series of NASA satellite images below, many variances of radio frequency cloud impacts can be observed. The degree to which the ongoing climate engineering/climate/interventi on/weather warfare is disrupting Earth’s atmosphere and life support systems is already beyond catastrophic and happening all over the globe. 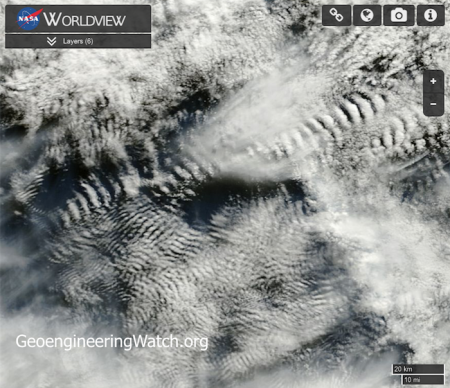 Off of east coast of Australia 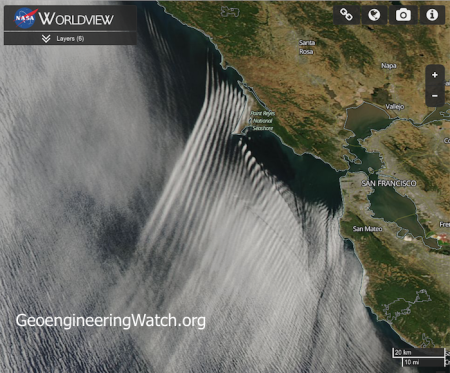 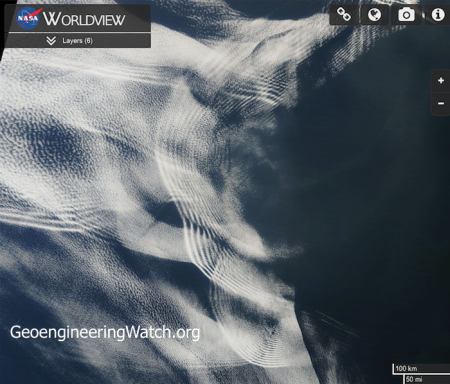 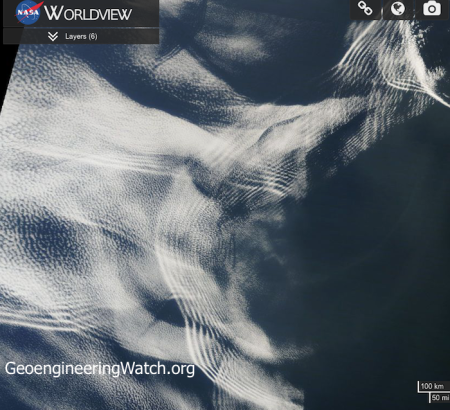 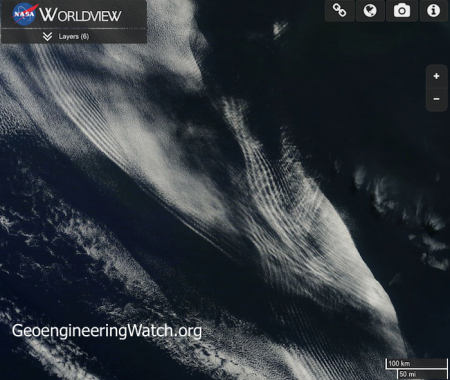 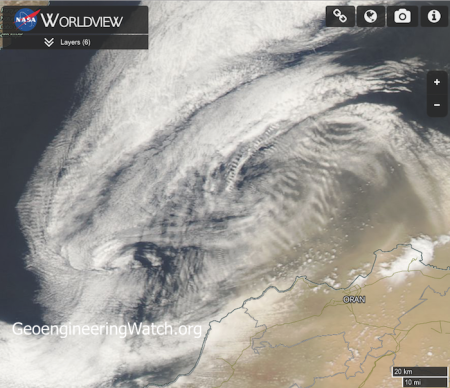 South of Spain in the Alboran Sea 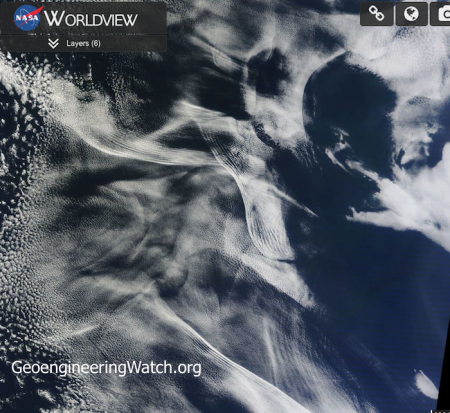 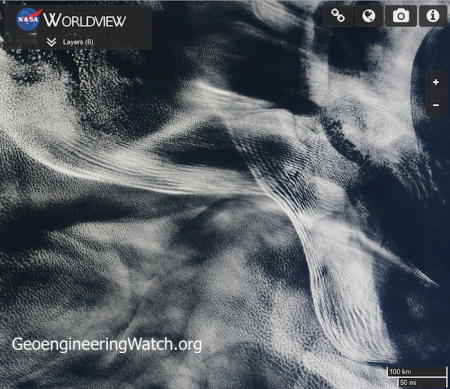 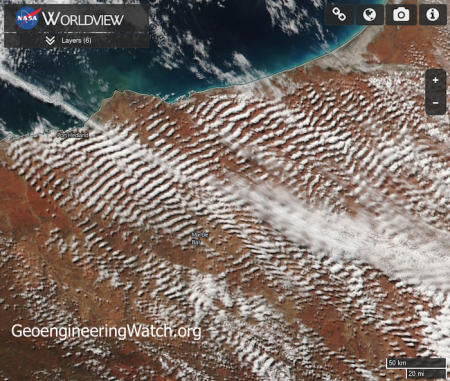 The northwest coast of Australia 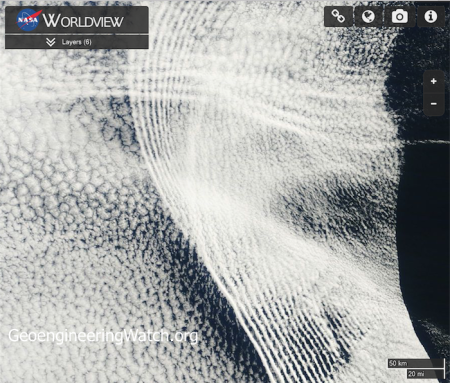 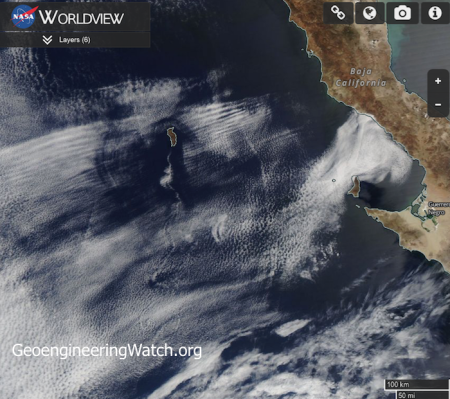 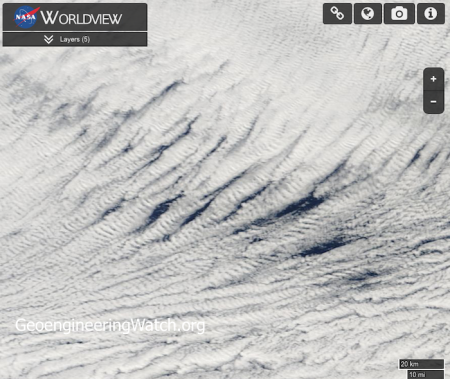 The Southern Ocean near Antarctica

Hurricane suppression/manipulation is one aspect/agenda of the climate engineers. 85% of the hurricanes that impact the US originate from Africa. Low pressure systems migrate toward the west, off of Africa’s coast. A great deal of climate engineering/intervention takes place in this region, thus a number of the satellite images shown in this post were captured there. In the attempt to mask the climate intervention activity, the cyclone suppression occurring off the coast of Africa is officially blamed on “dust”. Of course there is no acknowledgement of the ongoing climate engineering atrocities. The quote below is an excerpt from a FOX news article. Right now, much of the Gulf of Mexico and parts of the Caribbean have slightly warmer than normal ocean temperatures which would normally aid in tropical development. But there is so much dust and dry air in the atmosphere that storms are getting choked off before they even get started.

Though some may feel that cyclone suppression is beneficial, such interference with Earth’s natural rhythms and systems has a long list of catastrophic downstream effects. Available data indicates that in other scenarios the climate engineers are actually augmenting and steering cyclones to serve their own agenda. “Hurricane Matthew” may be an example of weather warfare on an unimaginable scale. Is hurricane Matthew being heavily manipulated and steered by the climate engineers? The evidence continues to stack up. Below is a satellite photo clearly showing atmospheric “waves” surrounding hurricane Matthew. SpaceWeather.com has labeled these as “gravity waves”, but is that what these visible “waves” actually are? The satellite photos already shown in this post inarguably reveal heavy atmospheric manipulation from extremely powerful radio frequency/microwave transmissions and atmospheric aerosols. These transmissions leave a signature pattern on high level cloud formations that are saturated with electrically conductive heavy metal nanoparticles which are dispersed from jet aircraft as part of the ongoing climate engineering insanity.

Does the photo above really show “gravity waves” surrounding hurricane Matthew? Or does it show the signiture pattern of extremely powerful radio frequency/microwave transmissi ons interacting with aircraft dispersed atmospheric aerosols? Both of these elements are a core part of climate and storm manipulation and steering. Photo: SpaceWeather.com
The global power structure long ago made the choice to subject our planet (and the entire web of life that it supports, including the human race) to an unimaginably massive and destructive climate intervention/weather warfare assault. This decision was made without the knowledge or consent of global populations. If we stand by and allow the decimation from the climate engineers continues to stack up.
All available data indicates that geoengineers have been actively suppressing cyclones in the Atlantic basin for at least a decade. Was Hurricane Matthew’s unexpected 90-degree northward turn a natural occurrence? Or was this course alteration the result of geoengineering, ionosphere heaters, and atmospheric aerosol spraying? As the photograph above clearly shows, radio frequency transmissions have a profound effect on clouds that have been aerosolized by the spraying of toxic electrically conductive heavy metals.

RF (HAARP) transmissions over the Prince Edward Islands can be seen in the image above. Above: Massive aerosol operations off the west coast of the North American continent.
Such heavy spraying (above) is used in conjunction with RF transmissions to manipulate weather patterns; bizarre cloud configurations commonly occur due to the radio frequency bombardment of the atmosphere for climate modification purposes.
The image shown below left is from the Eastern Pacific, June 26, 2015. The 90 degree angle cut into the aerosolized cloud cover is a signature of RF influence. The image below right shows bizarre cloud formations in the Lake Superior/Arrowhead region of N. Minnesota.

After over 65 years of climate “intervention”, very real damage has been done to the Earth’s life support systems (along with countless other forms of anthropogenic destruction to the biosphere). Climate engineers are now appear to be attempting to use the very same intervention methods which caused the damage in the first place, to mitigate the harm already done. There is no sanity in this equation.
The visible RF influence in the noctilucent cloud image below indicates probable evidence of project “LUCY” and project “ALAMO” at work. The ongoing radio frequency saturation in our atmosphere is extremely harmful to living organisms, including us. The 2-minute video below is an excellent capture of RF manipulation on weather systems. It is shocking, and well worth the time to view.
The planet’s climate system is unraveling by the day as geoengineers try frantically to control it with ever more desperate and destructive measures — which were a primary cause of the climate disintegration in the first place. The global power structure long ago made the choice to subject our planet (and the entire web of life that it supports, including the human race) to an unimaginably massive and destructive climate intervention/weather warfare assault. This decision was made without the knowledge or consent of global populations.
If we stand by and allow the decimation from the climate engineering insanity to continue, very soon Earth’s life support systems will be beyond any recovery. This is not speculation, but a mathematical certainty.
Please help us with the most critical battle to expose and halt the climate intervention/weather warfare assault. Make your voice heard.

Dane Wigington has an extensive background in solar energy. He is a former employee of Bechtel Power Corp. and was a licensed contractor in California and Arizona. He currently owns a 1,600-acre ‘wildlife preserve’ next to Lake Shasta in Northern California, and his personal off-grid residence was featured in a cover article on the renewable energy magazine, Home Power.
Dane initially focused his efforts and energy on the geoengineering issue when he began to lose very significant amounts of solar uptake due to ever-increasing “solar obscuration” caused from the aircraft spraying in his area. He also noted significant decline in forest health and began testing and researching into geoengineering about a decade ago.
Today Dane is the lead researcher for geoengineeringwatch.org, inves tigating all levels of geoengineering from stratospheric aerosol spraying (SAG) to HAARP. He assisted Michael Murphy with his acclaimed production of “What In The World Are They Spraying?” and has spoken extensively in a wide range of forums to explain the environmental dangers we face on a global level.
For more information, visit GeoengineeringWatch on Facebook and GeoengineeringWat ch.org (where this article first appeared.)
From Geoengineering Watch  @ http://www.geoengineeringwatch .org/nasa-satellite-imagery- reveals-shocking-proof-of- climate-engineering/ via http://wakeup-world.com/2016/1 0/22/nasa-satellite-imagery-re veals-shocking-proof-of-climat e-engineering/
For more information about geoengineering see http://nexusilluminati.blogspo t.com/search/label/geoengineer ing
– Scroll down through ‘Older Posts’ at the end of each section