By raysongtree September 3, 2018 letters and essays (Educational Comments only)

The 2018 movie Crazy Rich Asians is a slick, well acted romantic comedy, which disguises the true motives of movie.

Beneath the sensation of being entertained is subliminal mind programming and the social engineering of masses. Though allegedly a sometimes rowdy, sometimes sentimental, stereotype-shattering fun fest, the film begins with this quote, letting us know the true agenda of movie makers…

“China is a sleeping giant. Let her sleep, for when she wakes she will move the world.”

Historians know that Mao was placed and funded by the Rothschild central bankers, and that Mao’s Little Red Book was written by his finance and propaganda minister, Israel Epstein. We have watched how whole factories were shipped to Chinese slave towns in “free trade,” tariff-less deals, bringing mass unemployment to Americans. Now we see companies such as Apple Inc. abusing the population there, all at the expense of China’s once clean water and air. But Communist China is okay with this. Why?

China is simply a puppet in the geo-political chess game of international centralization. In this game, the purpose of competition is to wear down differences. (Hegelian Dialectic)  The Chinese puppet government has been promised prominence in the future, therefore, the Chinese government allows human rights abuses and pollution by Western tech giants. It is now even beginning to allow Google control over it’s people. (and here). The big money, (ultimately controlled by same central bankers who funded Communism) that moved to China after its “Open Door Policy” (and since) has promised them a place at the top of the hill.

And the Han Chinese, who often have an elitist self image (Sinocentrism), are eager to prove dominance.

Visits to China by ex-Google CEO Eric Schmidt, are not for sight-seeing, as Google (with parent company Alphabet) is not seen by most for what it is. Google is all about control, and China is leading in artificial intelligence, which is all about control. Schmidt is in on the tech.

Centralization is best accomplished with a homogeneous citizenry, and for globalists wanting more control, a global homogenous citizenry. This even involves gender blurring, which is definitely state funded. To accomplish homogenization politically, regional and cultural differences need to be smoothed over, and this is now accomplished through what we think is entertainment. It is not, it is social engineering.

We watched when Hollywood introduced non-traditional roles for women starting a century ago, that used lesbian feminist actresses and singers, from Katherine Hepburn to Madonna to Angelina Jolie.  Crazy Rich Asians continues this assault on family, by trashing men who, in the movie, make all the mistakes, and women who have all the balls.  The men grovel, the women bluster. This is the role model which both young western and eastern audiences will be fed.

One male character in film, a husband and father is told “it is not a woman’s job to make man feel like a man,” as she stomps away like a real man.  In fact, it was her neglect that broke up their marriage, but that stated point is lost to audience and the man is portrayed as a loser even after he makes his accurate observation. She appears to win by owning more property and by being blind, and he loses by seeing and being real. The scene ends with her announcing that she will decide unilaterally what their son needs and when visitation can occur.  She is the boss, after all, which is exactly why the marriage broke up, but, broken families are just collateral damage in a world in which female pride dominates other concerns. The script even names her as wearing pants in family and then she proceeds to prove it and dominate!  Crazy Rich Asians infuses this paradigm into the minds of the audience, as we are too busy chuckling at clever lines to notice the underlying role models which will subconsciously guide our behavior in future.

“Tradition is expendable” has been the battle cry of cinema for a hundred years.

Protagonists for dominant females include the Grandma, the groom’s mom, the grooms sister, and in a cute manner, the central actress. This role has been portrayed so many thousands of times, in everything we see since being children, that most people would not even notice it. That is how subliminal programming works.

The men are featured as not much more than prostrating sex objects, with all three male actors dishing out cliche naked upper body scenes. In many ways, the movie is a chick flick, so turning men into hunks of meat makes sense for superficial women, which the entertainment industry definitely desires and is creating. They want us to be dumb consumers obsessed with carnal lust. Men were targeted in past, now women are targeted for this debasement also.

Another  subliminal message in movie is that Asian men are contenders in the world of attractive hunks of meat. After the credits at end of movie, the viewer can make a judgment call.  Is the new male face we are shown a Chinese man or a Marlboro man?

Crazy Rich Asians will probably make crazy money throughout Asia, as the worship of western materialism is replacing deeper spiritual callings. (We see this in India also). In the movie there are frequent trophy shots of Singapore skyline.  The artificial is beautiful is the carry away message. Glitz on steroids. In fact, what we are seeing is a waste of electricity.

A party boat suspended in the upper strata of vanity. Singapore, the capitol of consumerism?

While we English speaking viewers are conditioned to accept Asian ways as normal and not foreign,  few might know that English is a required language taught in Chinese schools. “In an effort to promote internationalism, China is learning English.”

In Mandarin, Mei-gua refers to the United States. It means “the beautiful land.”  Chinese people don’t hate America, they want the American dream. They want to be able to consume like Americans consume.  And like Americans, they are not taught that materialism is unsustainable which means doomed.

But hey, entertainment is not supposed to be educational, right? We need to be distracted and dumbed down, not woken up, right?

The name of movie is its own message. There are over 50 spoken languages in China alone.  Asia has 2197 languages, most of which probably don’t have a term that means “asian.”  In other words, the word “Asian” means little.  But it does mean something in terms of erasing identity as an extremely broad brush.

The name Crazy Rich Asians, creates a new non-identity which facilitates a new pan-Asian political unit to be managed by the United Nations. For skeptics, the “Asian” managerial unit is  paralleled by the plan for a North American Union (Canada/USA/Mexico).

The back ground story of movie is that the lead male goes to the West and returns transformed. He comes back, no longer Chinese, but now modern. The entire audience, both western and eastern, will be given this role model. Being super rich, this hero who will never have to lift a finger in his life, has only one challenge which is to act un-rich to win over the heroine, portrayed as a humble, cute, giggling superior brain. Superior.

The music is recognizable American pop songs sung in Chinese. It is odd, but gives impression that China has produced this energy also. It hasn’t. Catchy familiar tunes with a good beat keep us on the train that carries subliminal messages. The momentum of movie is superb.

The audience is seduced to believe that Chinese people (as a homogenous whole) are very cool and hip. Not only that, they are cool in an American way, so let’s open our doors and hearts to them. In fact, we are convinced that there is no difference between  Chinese behavior and American behavior.  This cannot be true, but the movie proselytizes this message.

We are tricked by fake staged fictional scenes to accept Chinese culture and people as the new normal, and Asian audiences will be tricked to believe that American culture is the new normal. This is the purpose of film.  The film is a globalist homogenizing project.  It is predictive programming to soften any autonomous people’s sense of territory.

The lesson is that if nothing is ours, then a “they” no longer exists.  They are us, we are them.  With no foreignness remaining, we will “all be one” and have peace under centralization, right?  That is the underlying subliminal premise. Never mentioned or considered is that the price of such a “peace” is that uniqueness will be drowned out in a grey mediocre blur. The name for this new reality is called mono-culture.

It is no coincidence that the film opened same week as the movie Meg, a monster shark flick featuring a boat captain who speaks Chinese with English subtitles, to wear down our sense of foreignness.  The coming previews  shown before Crazy Rich Asians began, included a coming movie Second Act with Jenifer Lopez. She plays part of woman who is an expert Mandarin speaker. Coincidence?

We are being rapidly conditioned to accept Chinese language and actors as equal in a mono-culture in which all races and cultures are melted and are held together by materialism, fashion and pop music. Chinese youth will feel at home anywhere as will Americn youth. Even Singapore. Everyone has same values and aspirations, right?  And if Chinese own most of United States, what is there to resent?

In this new world, all traditions are to be evaporated by the fire of individual desire for glitz.  Though the movie mocks this idea with comical actors, the core theme is exactly this message.

The music, the joking, the openly gay actor, the liberated woman, and the new Marlboro Chinaman combine to indoctrinate us to accept a mono-culture that circles the globe. What was once diverse and authentic becomes manageable labels that seamlessly compliment one another.

And then there is the gaff against President Trump, when the central actress visits the home of her Chinese friend with dyed blond hair, letting us know that it was indeed globalists, who hate nationalism, that produced this film for their agenda, not yours. 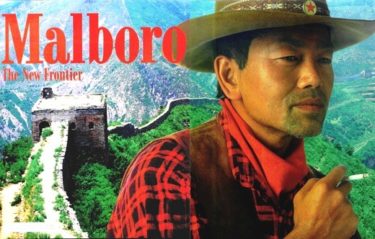 (Note, the author, Ray Songtree, has two children by two marriages to Asian wives. I am able to see from the inside how blurring is being accomplished.  Related article.)