By raysongtree August 25, 2018 letters and essays (Educational Comments only)

Racism against Whites in Africa?  Perhaps we need to consider a larger context, like life on Earth and consciousness in the cosmos. 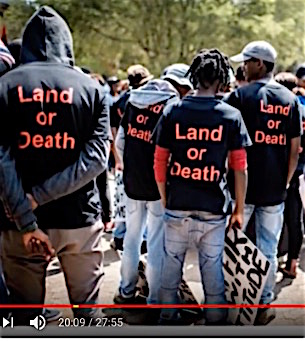 In photo, the white sign hanging from man’s hand says Kaffir with Attitude.

Kaffir is like word Nigger.  The white colonialists made up this epitaph for the ancient locals who they invaded.

“Kaffir is an ethnic slur used to refer to a black person. In the form of cafri, it evolved during the pre-colonial period as an equivalent of “negro”. In Southern Africa, the term was later used as an exonym for Bantu peoples. The designation came to be considered a pejorative by the 20th century.” – Wikipedia

What does any objective observer really expect after four centuries of racism? Do they expect love?  I went there last summer. The businesses are white owned. The prostitutes are black.

White people should leave South Africa or be killed, period. Four centuries of rip off rape and enslavement is not going to be forgotten. Actions have consequences. Actions have karma.
Calling this racism is like calling freedom fighters “insurgents”.
Alex Jones, alternative news on some topics, but dominant culture on others, repeats the lie that southern Africa was a waste land. Not true.  Capt. James Cook declared Australia uninhabited. Terra Nullius. Lie.  The dominant culture dismisses other cultures as not even being real.
South Africa was home to indigenous people who who did not disturb the land for hundreds of thousands of years. That is called success. Civilization came and started destroying the land which is now, of course, polluted.

“Most groundwater quality and quantity problems in South Africa are related to human activities that result in infiltration of chemicals and toxins used in industry, acidification and increased metal content in mining, salinization and eutrophication, microbial effects in urban development, as well as the intensification of agricultural practices such as sedimentation, infiltration of agrochemicals and salinization through irrigation return flows.”  – Source

Alex Jones is still a dominant culture thinker “heading for the stars.”  Earth is just a place to be used in order to fulfill our destiny of leaving it, or so he thinks.  He is not alone.  We “civilized” people prefer toys over virgin land. The Earth and life itself is simply collateral damage to we “non-primitive” people.  Who cares about the “savages.”  Who cares about ancient anything?  The ancient is not progressive!
But who are we really, with our ET technologies? Are we not just happy slaves for THEIR agenda?
Now, here is my theory about why we don’t see this natural retribution against European (White) land ownership, which the Europeans stole from locals in past as an institutional and cultural crime against humanity repeated world wide, being reported in mainstream news.   Well, I just gave the spoiler. It is our cultural bias to rip off others so why report it?
But to flesh it out, the cover up is because the New World Order, run by pedophiles and satanists with their inter-dimensional aliens, wants to clear the land everywhere for mineral extraction.  Their plan is to strip mine entire planet and the less resistance the better.
So, as the British did in Hawaii and New Zealand, arm the people so they can kill each other off.  We too are being de-populated, mostly with wifi. Eventually we non-gender infertile humans will be replaced by clones who will continue the extraction, something like that. China is scheduled to be the next juggernaut of New World Order, after USA fades and after Britain which is already faded.  China is busy in Africa building infrastructure for…. extraction.
Therefore, in eyes of controllers, let South Africa become a failed state like Libya. Let entire world become failed state of misery and crime. This would be just fine because the infrastructure, the police state, and the AI is already being placed to manage the next level of technocratic control of …  the resources.
The New World Order controlled media will keep violent racial retribution in Africa hushed up just as Swedish and German media hushes up migrant rapes of locals.
The  reason that Europe will soon be intentionally destroyed by race and religious wars due to insane immigration policies is same idea, to clear the slate of nationality and create chaos requiring martial law. Thankfully, Hungary has good leadership to start the rebellion, as Britain has Brexit and USA has anti-globalist Trump.  So, in South Africa, the media will cover up de-population as it does everywhere else.
We can ask, is there an alternative time line to total control?  Logic says that after we expose and arrest the controllers and give NO AMNESTY to their minions, then each locality will need to have a unique locally managed sustainability/population plan, because if not, one world government will raise its head again, now “purified” of the bad guys.
A benign tyranny.  Right.  Some people actually think those two words could co-exist. Movements like “Thrive” are built on idea  that everyone (all people will want same thing) will have unlimited toys and energy.  Heaven, right? “Equally” distributed and the distribution enforced by a “benign one world government.”  No oxymoron there?
Let’s go further into this dream. Let’s ask, will there then be peace on earth? Logic doesn’t understand question and asks, “Will there ever be stillness in movement?”
No, there never will be stillness, peace, stasis anywhere because all places are moving and changing, including borders, and therefore, heaven is a fantasy.  The so called heavens are not heavenly. The reason we are here is that it is oppressive to not have a body to call home.  We get tired of being homeless and tired of the corruption that comes with the begging bowl. That is correct, “angels” are bodiless beggars here, demanding control.  But, you know, good control. Right.
Being homeless and ethereal means that a being must tax other peoples domains. That is what the “freedom” of heaven means. It means being a parasite.  I call these people the homeless voyeurs, terrified of incarnation.
At least we on Earth can struggle and keep up with life itself.  We are current. The homeless voyeurs are always being left behind.  So please buckle up, we will have to struggle, adjust, evolve, change forever. Take a deep breath. No resting ever.
(Oh, BTW, no one experiences death so we can say “forever.” We experience dying and then, blink, we find ourselves out of body and still alive in a different way. )
I love nature.  I marvel at rebirth.  I look at my pretty daughter and remember the old man she was in her last life, who I knew.
The white colonialists will be kicked out of Africa, or be killed. Guaranteed.  Who can love racists?  It is called natural RETRIBUTION. But some people think peace will be enforced by tyranny. No thanks.
Taking a cosmic view of South Africa, we simply see the laws of cause and effect being played out.  Crime came to ancient Africa.  Crime will be expelled and if Africa starves in order to return to nature, that is better than being slaves of a machine.

Why is this shocking display of RACISM not headline MSM, leftwing news ???
Modern day Nazi’s steeling property and torturing any who resist and even some who relinquish their property with NO compensation.
Trump Warned of South Africa – in 2013 – NewsWars