Feminism Comes to Ethiopia And What Does That Really Mean? 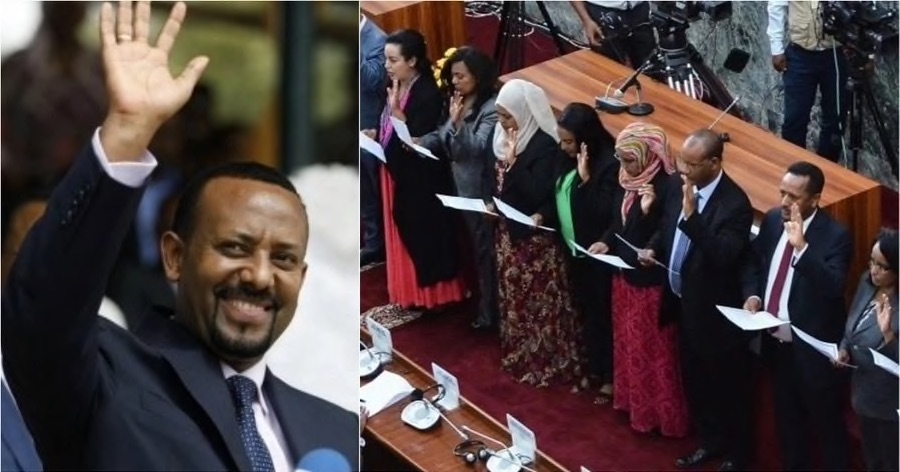 Wrong…. we are told, though this would be top secret, that the US closed it’s drone operation in 2016 at bequest of Ethiopian Government, perhaps as it bows to Muslim pressure, another demographic which is new to area.
Meanwhile, we see the present Prime Minister Abiy advancing the New World Order (NWO), new age, all are one agenda by promoting women in his cabinet ( see article far bottom).
Feminism is not about equal rights, it is erasure of the feminine and masculine as complimentary polarities to sideline men as needed for child raising. Always, along with feminism comes normalization of premarital sex and single mothers.  A women should have a right to be as promiscuous as she wants, right?  We all grew up this way, under the influence of CIA Playboy and Ms. Magazine. Consumerism and temptation lead us into slavery.
Madonna very much helped convert a generation to this thinking. Now it is Miley Cyrus. Guaranteed when Cyrus has a child, she will end up single mom like Adele, Jennifer Lopez, Witherspoon and the list on the tabloid news stands. The new normal.
A whole family should be a role model, but it is opposite now, and this is coming now to Africa also. Normalization of single motherhood is liberation, right?
Who would have thought that the NWO would take on China? They did with Mao and his finance minister Israel Epstein. Who would have thought that the NWO would take on India? They have with biometric ID’s for all citizens and going to digital currency as soon as they can.  Who would have thought that the NWO could take on Africa?  It is doing so, first with funded strife, as per Rwanda which spread out to Congo, and then, it appears, Ethiopia will try to end its Tribal (small ancient nation) conflict, that is, diverse tribal unique identities, by pushing single motherhood.
A stretch?  Guaranteed, that is what feminism will bring. Check out the articles on this search “Uganda Single Mothers.”
If “tribes” (small nations) were allowed their own territory, they would have sovereignty.  But then the UN wouldn’t have “Ethiopia”.
On my family’s (single dad) trip to South Africa last year we saw the meme’s on the billboards. The successful African is shown working for international mining companies. We saw this in Australia also by the way. China is busy setting up Africa with a more efficient infrastructure for extraction of resources.  The people will be pushed aside, as in Australia and Standing Rock.
To destroy tribal affiliations, one begins with destroying the head of the family.
Below, a former Ethiopian’s take on article at bottom.
-from “A”
“What the writer presented in this article is mostly factual, things that actually happened.  He seems like an experienced journalist in North African affairs.
“Ethiopia is so different now than the country I grew up in, I am like a foreigner there now.  To see women, especially muslim women wearing muslim garment getting elected in high cabinet positions such as defense minister, in the Ethiopia I grew up in under emperor Haile Selassie ( Orthodox Christian from Amhara ruling class, who used to trace back his lineage back to King Solomon, and whom the title Lion of Judah was bestowed upon) was unthinkable.  Among  my father’s several occupations was being a minister in charge of ministry of defense for few years under Haile Selassie.
“The new prime minister (Abiy) has a very good energy, he is smart, and talks a lot about love and peace, very unusual for a political leader.  There are many people out there trying to sabotage / kill him because of  it.  My mom says she prays for him to stay alive and be successful as a ruler.  The country is hopelessly divided along ethnic tribal lines more than ever because the previous government made tribal politics the basis of their governing style.  This coupled with population explosion, and new generation heavily influenced by western culture, it is not clear to me where the country is heading.  There is a very old tradition, and some good history to balance things out, which might help.”

A–, what do you think of this article?