CNN Film “The Man In The Machine” Smears Steve Jobs

By raysongtree January 9, 2016 letters and essays (Educational Comments only)

Steve Jobs, transformed by CNN to negative icon…  CNN placed this two hour film (with the commercials) as prime time weekend evening feature several nights in a row. They are attempting to bend the legacy and life of Apple Inc’s Steve Jobs.

The purpose of film “The Man in the Machine”, as I had thought, was to tarnish Steve Jobs in the eyes of world, and to promote Bill Gates, with fake headline in movie, “Bill Gates gives 100 million to India,” which is a lie.  Gates gave India 47,000 cases of paralysis.

Gates also invested in Monsanto which forced suicide of tens of thousands of Indian farmers because their seed would not re-germinate. These are called “terminator seeds.” Yet Gates is spun as a philanthropist in the movie.

Jobs did in fact give money to charity, which the video could easily have covered, but intentionally painted picture of the opposite. Steve Jobs was quiet and NOT an egotist about his charity, as Gates is.

Globalist minion Al Gore is shown in positive light in movie.  The globalists are painted positive, while Steve Jobs, a non-conformist, is painted negative.  The movie is therefore pro manmade global warming and pro Bill Gates Foundation, both globalist fronts for more control. Of course CNN covers up truth and spreads spin as CNN is wholly controlled also. The movie paints the bad guys as good, and Steve Jobs as an “asshole.”

The movie says Jobs tried to deny he was father of a child. The woman who got pregnant never denied that she was sleeping with other men. So she was. We don’t even know if the DNA test was true. Many DNA tests are false.  What we know is Jobs did not think the child was his kid, but later he had relationship with daughter Lisa who he accepted as family. So despite his doubts, he did accept the child, which the movie doesn’t cover, intentionally painting Jobs as a deadbeat dad.

Steve Jobs did not allow his own kids to use cell phones or devices because he knew the health dangers. This is why he was killed. As the dangers became more obvious, he would have screamed, and the depopulation programs  supported by people like CNN Ted Turner don’t need someone like Steve Jobs blowing whistle.

Here is an article about Jobs’ spiritual background.   You won’t find anything like this about Bill Gates or his father, William Gates Sr., the Planned Parenthood eugenicist who controlled Costco for 11 years. 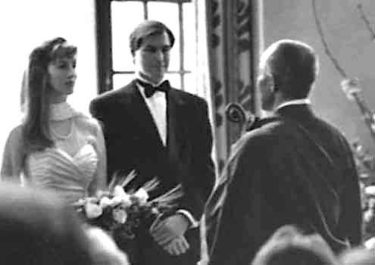 In my opinion, Steve Jobs death was a murder.  I do not think it a coincidence that Kobun Chino Roshi, shown to right at Jobs wedding, was found drown without a police report and that Jobs died young of cancer.   There is no evidence that Kobun was trying to save his daughter when they both drown in a Swiss pond in 2002.  As far as I know, I am the only one who has connected the dots on this. Kobun was someone I knew personally as the intro of my books explains. All that is known is that both Kobun and his daughter drown while visiting the country controlled by the New World Order that controls everything of economic importance, and certainly the globalists came to control Apple Inc.

Wireless frequencies are dangerous, and Steve Jobs, having a Buddhist conscience would have eventually seen this and changed the course of Apple and the internet.  This was unacceptable, so Steve’s goodness became an obstacle. Kobun Chino Roshi, as the elder of conscience behind Steve Jobs, was taken out and then Jobs himself was taken out.

I have tried to connect the dots here between two suspicious deaths and the elephant in room… purposely undiscussed dangers wireless frequencies.

Let’s remember that CNN founder Ted Turner is married to Jane Fonda who takes part in  a gay agenda series on Netflix, and the gay agenda is decidedly a New World Order program. Thus we see that CNN Ted Turner, who loves New World Order David Rockefeller, and Jane Fonda who loves the “anything goes” non-ethic, support CNN’s own agenda of “transformation.” CNN sold us 9/11 and weapons of mass destruction in Iraq.  CNN has been shown to create fake news in support of globalist contrived war.

A man with ethics, such as Steve Jobs, is transformed through CNN spin as unethical. We would expect this deception from CNN.

This is why they produced a movie slandering Steve Jobs, a man of quiet non-egotistic ethics and integrity.