By raysongtree February 5, 2016 letters and essays (Educational Comments only)

-by Makia Freeman, editor of The Freedom Articles and senior researcher at ToolsForFreedom.com (FaceBook )

Zika is the latest health scare to dominate the headlines. Is it a real threat? Is it a bioweapon? Or another fake pandemic?

Zika is the latest health scare

to dominate the headlines of the MSM (Mainstream Media). The WHO (World Health Organization) declared a “Public Health Emergency of International Concern” 3 days ago on February 1st, 2016. They stated that “the experts agreed that a causal relationship between Zika infection during pregnancy and microcephaly is strongly suspected, though not yet scientifically proven.” Did you catch that – not scientifically proven? However, the lack of scientific proof has not stopped all sorts of fearmongering by the MSM and Governments around the world. Apologists for this may claim it’s better to be prepared than not, but you have to wonder about that kind of preparation when Governments like those in El Salvador have actually instructed their citizens not to have sex! Before getting overly scared, paranoid or doing a “zika freaka”, it’s worthwhile investigating the issue further. Is zika a real threat? If so, is it a bioweapon or an agent of bioterrorism or biowarfare? Or is this another fake pandemic like ebola, SARS and many others before it?

The Zika virus: made in a Rockefeller lab.

It’s pretty early on in the life of the current zika phenomenon – and at this stage I would suggest calling it the zika phenomenon rather than the zika outbreak. However, the zika virus itself has been round a long time – since at least 1947. Guess who owns the patent for the zika virus? None other than at the Rockefeller Corporation. The Rockefellers are, of course, one of the most wealthy and powerful New World Order families.

Here is the screen shot of above link. http://www.atcc.org/Products/All/VR-84.aspx?slp=1&geo_country=us#history ] 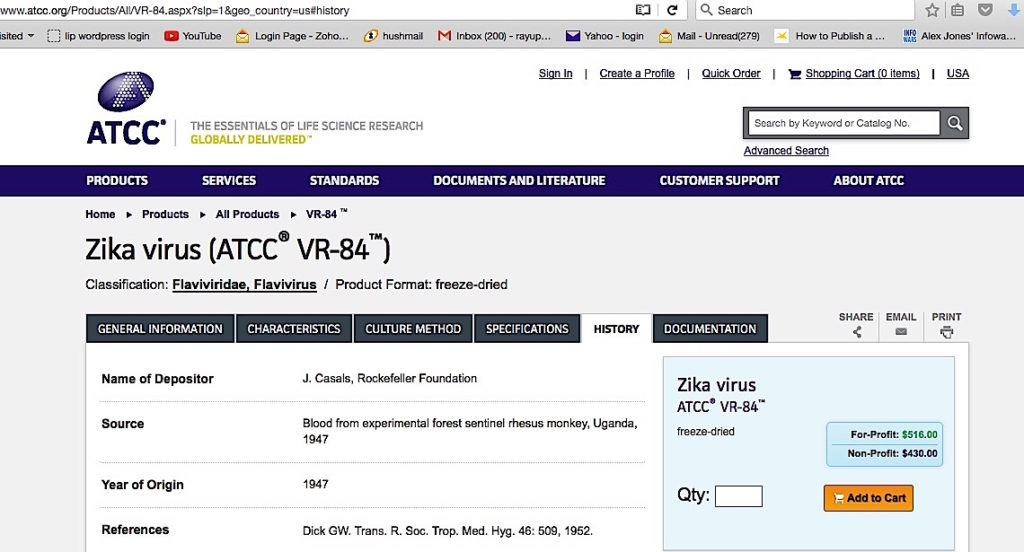 During the ebola scare of 2014, which turned out to essentially be a fake pandemic, I wrote the article Ebola: Hoaxing It Up! I pointed out how the clues which showed that the whole thing was a fearmongering scam, and that whatever danger the virus posed was being blown way out of proportion. For instance, people were treating a supposedly delay virus in a ridiculous way, e.g. by walking through ebola-infected water with sandals. The Government was clearly using crisis actors, just as they do with all the false flag events of recent years. At the time, almost all the MSM and even many in the alternative media were hyping the threat, knowingly or not.

However, there was one man who stood his ground and insisted the whole thing was a hoax: Jon Rappoport. Jon has studied these pandemics very carefully over the years, from AIDS to SARS to ebola and more, and in my opinion, has the best grasp of these issues. His conclusion with zika is the same as with ebola: the zika phenomenon is a hoax, using the cover story of a “deadly virus” to hide other uncomfortable truths, full of unfounded assertions and presumptions, and based on little or no evidence.

1. Where is the evidence of a “epidemic”, i.e. a sizeable number of disease cases in a geographic area, or a “pandemic”, i.e. a disease prevalent over a whole country or the world? The latest figures via Rappoport (who quotes from a Sao Paulo newspaper article) are that 4783 suspected cases of microcephaly have been reported, that only 404 cases of the 4783 have been confirmed as having microcephaly, and that only 17 cases of the 404 have been linked to the zika virus. (Microcephaly is defined as “abnormal smallness of the head, a congenital condition associated with incomplete brain development”; there are an average of 25,000 cases annually in the US alone.)

Remember, this is a final figure of 17 in Brazil, with some more reported in some other countries. Yet, the BBC dutifully reports the WHO predicting upwards of 4,000,000 zika cases in 2016!

2. Even if there were tens of thousands of cases spreading rapidly, where is the evidence that zika is the cause of the microcephaly? After all, microcephaly can be caused by a variety of genetic and environmental factors, according to the Mayo Clinic. Some of these “factors”, as it were, are actually deliberate pesticides poisons such as glyphosate, atrazine and metolachlor (all sprayed in Brazil). Often the real causes of a disease, whether it is an outbreak or not, are not as sexy, sensational or “newsworthy” as the MSM and Government likes them to be: lack of sanitation, lack of hygiene, lack of nutrition, exposure to toxins, vaccine damage, pesticide intake, Big Pharma drug effects, etc. It becomes even more interesting when you consider that the toxins potentially causing the disease are the very ones sold by people and corporations (e.g. Big Biotech pesticides) that also own those same MSM channels and outlets …

3. Even if there were a true epidemic or pandemic, what is the justification for calling for people to not have sex, and for women to have abortions at sea? Is this not utterly insane and tyrannical? The fearmongering has reached the point where people are being manipulated into killing their babies just because they might have zika – and that zika might cause microcephaly in their children?

The 2 Useless Tests that Form the Basis of Pandemic Propaganda

Whenever a story of disease epidemic or pandemic breaks on the MSM, if you want to know the truth of it, here’s a handy litmus test. See if the reports are based on either the Antibody test or the PCR test. Both of them fail to ultimately prove whether the dreaded virus in question is the cause of a so-called pandemic. As Rappoport explains:

“When a test shows that antibodies geared to a specific virus/villain (like Zika) are present in the body, it means the body has contacted that Zika virus—if the test was done well and didn’t come up with a falsely-positive result. False positives are frequent.  But more disastrously, proving the body had contact with a specific virus says absolutely nothing about whether the patient is sick or will get sick. In fact, before 1985, a positive antibody test was generally taken to be a good sign: the body’s immune system had encountered and overcome the invader. After 1985, the “science” was turned upside down: a positive test meant the person was sick or going to get sick.”

So much for the Antibody test – it only shows if the body has developed antibodies to a particular virus. That doesn’t tell us if the virus is still present, and what the implications are for his/her current and future health.

“The PCR is a very sophisticated and tricky test to run. It is prone to errors. It takes a tiny, tiny amount of material assumed to be a fragment of a virus, and it amplifies (blows up) that fragment so it can be observed. The first problem with the test is: did technicians indeed choose a tiny sample that actually is a piece of the virus in question? Or is it simply a bit of genetic debris? The second problem is: the test, despite claims to the contrary, says nothing reliable about the amount of virus (like Zika) that is in the patient’s body. Why is this important? Because you need a great deal of virus in the body to begin to say it is causing disease. A very small amount is trivial.”

The PCR test is qualitative, not quantitative. It shows if a virus is present, but it tells us nothing about the quantity or virulence of the virus. It is inconclusive. It simply can’t tell you whether it a virus is present enough in large or dangerous enough quantities to actually cause disease.

Is Zika really about population control?

Step back and take a look at the whole zika phenomenon for a minute. First, it began a long time ago with a Rockefeller patents in 1947; then, it gets triggered by GE (genetically engineered) mosquitoes released by Oxitec (with funding from Bill Gates); then, Oxitec makes the mistake of not taking into account the amount of tetracycline in the pesticides in the area, thus rendering their GE mosquito idea null. Then, what are the solutions that the MSM and Government propose? More Big Biotech, Big Agra and Big Pharma intervention, of course: more GE mosquitoes (they’ll be better this time, we promise!), more pesticides and more vaccines.

Are you beginning to see a pattern in these fake pandemics?

If Nothing Else, Zika is At Least a New Angle at Population Control

Knowing the penchant that the New World Order criminals have for depopulation, we can at least say, if nothing else, that zika is a novel angle at population control. The NWO conspirators have found a new excuse to tell people not to have sex and to promote more abortion. Eugenicist Aldous Huxley, author of Brave New World, which describes a future society where reproduction is strictly controlled by the State, would have been proud.

Want the latest commentary and analysis on Conspiracy, Natural Health, Sovereignty, Consciousness and more? Sign up for free blog updates!

Makia Freeman is the editor of The Freedom Articles and senior researcher at ToolsForFreedom.com (FaceBook here), writing on many aspects of truth and freedom, from exposing aspects of the worldwide conspiracy to suggesting solutions for how humanity can create a new system of peace and abundance.

Zika freakout: the hoax and the covert op continue

Is the dreaded Zika virus another giant scam?

Who Owns the Zika Virus?