By raysongtree September 27, 2017 letters and essays (Educational Comments only)

Thanks for your long and thoughtful letter, once again. Please see the [bracketed comments] within your letter below…

My opinion is that Robert (Steele), like many of us, thought that Trump was serious about unrigging government.

As it turns out, Trump is quite mixed up and compromised by his own Jewish blood and Jewish family.  To expect him to be against the zio-cons is not going to happen.  I know Robert felt he had valuable ideas for Trump but now it is re-trenching time.  Election reform is their focus.  I feel that full spectrum dominance deserves full spectrum resistance, so EVERYONE can join in and push back on any front that holds passion!

Remember, the CEO of Meetup torpedoed their ship.

Their trip fizzled, but so what, I love them both for being so pro-active and I’m glad I gave to them.

Spiritually I am connected to you now, to Robert, and to Cynthia.

I recently let them both know the biggest conundrum…

How to save life on Earth?  We must shut down and dispose of the nuclear waste of over 450 nuclear reactors, and there is NO plan how to get rid of the waste. (There are a list of awful contaminants) There is no plan or solution!   The nuke missiles of both US and Russian were shut down by ET in 60’s-70’s. You can study that if you want to.  But what about the waste?  Most governments are run by satanists who don’t care about life, as we can see with Fukushima cover up. Did you know Hillary Clinton signed agreement to continue importing food from Japan that was contaminated?

These people have no idea of what nature or purity might be. I call them Homo indoorsians.

So here is the conundrum, to shut down 450 reactors safely is going to take a real united effort, or at least an altruistic initiative that we have never seen before. All the alien bankster driven initiatives have been destructive. I am suggesting that only a positiveone world government can save life on Earth, and that is an oxymoron, hence a conundrum. “Positive one world government?”  Oxymoronic!  Positive centralization?  Eeeeeekkkkkkkkkkk!

I would say this is my number one concern, how to save life on Earth.  I can imagine exposing and busting all the heinous disgusting programs, and the public distrust brewed up will help re-localize people so that local communities can become independent responsible stewards again….

But how the f— are we going to clean up the radioactive waste??? There is no plan. Meanwhile, France has 60 reactors ringing its borders. And US many more. See graph below. 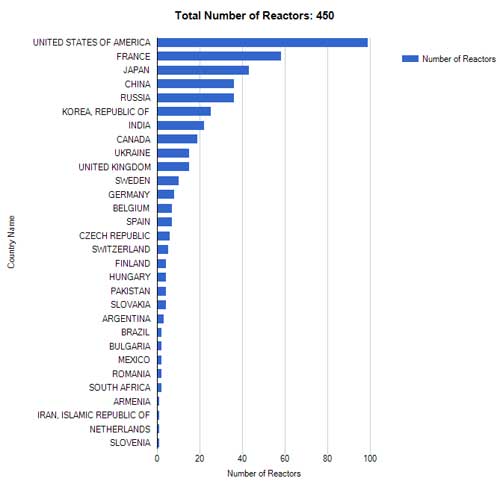 Well, we have to find a solution, or the biosphere is toast.   So that is my biggest conundrum.

Aaron, I don’t think you understand me when you wrote…

“what I think I hear coming from you
than that you think that “out of many: one” is beautiful while “out of
one: many” is horrible. Well at least I know you’re into the “out of
many” part, as for the ‘one’ it becomes or doesn’t become that is
certainly the ongoing debate isn’t it.”

Well, I absolutely don’t want “one.” I want out of many, many.  I want to return to 6000 languages and unique cultures that are isolated and sovereign, like we had in the America’s and Africa and Australia and Pacific 500 years ago before the coloni-ass era. Eurasia has had a ruling 1% for thousands of years.  Most Eurasians know nothing about nature, all they know are terraced rice paddies and Roman arches. Nature?  So for Eurasians to understand someone like myself who was learning how to collect, leach, cook acorns as a young man is a stretch.  Imagine someone who wants to study how to be poor 🙂  (I did lose that path along the way.  I want to get back to it ASAP.  I am getting more serious about growing sweet potatoes and taro now here on Kauai…)

Obviously, the US and France must figure out the best way to shut down nukes and dispose of the waste, no matter how much it costs…. BTW… look at how many reactors S. Korea has !!!!! What!
That is how they become “prosperous.”

And I do hope Cynthia McKinney will be our next President. I’ve been saying this for some years now, so I am happy to have given to her and Robert. If my books could somehow be marketable, I would have more to give…. sigh.

Please send photos of your new baby.  When that baby locks his/her eyes into your eyes for first time, you will see an ancient soul. It is quite an experience…

I’ll always remember my son laying on his mom’s tummy and looking at me. I learned later he had been my own father more than once 🙂

Sorry for my couple of weeks absence, I’m still here. I don’t have a
sacred cow, and even if I did I’d welcome anyone questioning and
challenging it. 9 months pregnant wife, staff members falling apart, not
enough diligence. And I’m not online as much as some of your readers so
once I unplug for a few days it takes a while to catch up.

First I want to say thanks so much for your reflections on my Unrig
document there. You are so right that its more of a re-rig. Hilarious
and astute and thought provoking observation.

I will say, from what I have gathered of yourself and your ethos, I’d
probably say you’re the best Unrig guru I can think of. Think of
Unrigging as a staircase, You’re either at the way top or way bottom of
it and I think I’m a few steps away. While I think your supreme
Unrigging is great and in most ways I aspire to reach that plateau
someday, I very much doubt that the human mush we share so much with
(time/space/economy/air/citizenship) are anywhere near me let alone you
on this staircase, [Yea, you are right.] and I guess my document was mostly written with Mr. and Mrs. America in mind. O well.

I think while you and I and most of your readers don’t always agree on
the specifics of the issues, we all have the notion of E Pluribus Unum [link]
emblazoned on our hearts and we also all have the inclination that our
nation and world are lost down the dark path of E Unum Pluribus.  [You lost me here.]

I can’t think of a better way to describe what I think I hear coming from you
than that you think that “out of many: one” is beautiful while “out of
one: many” is horrible. Well at least I know you’re into the “out of
many” part, as for the ‘one’ it becomes or doesn’t become that is
certainly the ongoing debate isn’t it.

[Tribes can unite to beat a common enemy, like natives did everywhere in facing the white man, but they didn’t stop being tribes.]

I was trying hard to get something written for Mr. Steele and Ms.
McKinney to chew on since I thought they were going to swing by my part
of the world, but apparently they just drove to Denver and back. To say
the road trip was anti-climactic would be an understatement. I do not
think its was intentionally deceptive of them, [No way, they just felt the energy and realized it was best to retreat.]  but I think the Portland
wildfires gave them an excuse they were all too eager to embrace to get
them off the hook for their poorly planned road-trip that they didn’t
really seem to want to be on. [Well, Meetup CEO screwed them royally]

I’m going to rework/rewrite my document to try to add any ideas I can to
the ‘Power Cell’ approach. I have reached out to Ms. McKinney’s
‘assistant’ that I am on board with the Power Cell approach and so I am
waiting for instructions from them. I watched some of their videos and
looked at the document she prepared with the picture of the hand-written
notes that referenced: “what can we do in 24 hours”, 1 day, 1 week, 1
month”. Unimpressed would also be an understatement, but I’m holding out
hope that there’s something deeper here.

I get good vibes from Steele and McKinney. I know that is ridiculous
considering I only know them from YouTube, but its gotten me this far.

[It is not ridiculous. We are telepathic intuitive beings, and any thread can be a direct connection.]

Practically, I think knowing you has helped me to see that they’re Unrig
effort is sucking mostly because they’re really only thinking about
Unrigging politics and government and meanwhile they’re cranking so hard
in their professional lives that they can’t Unrig at all. Ditching the
RV and just walking would be their best hope at this point.

[Cynthia is like a brain surgeon. Don’t ask her to work on feet. She knows what she knows and that is her gift.]

I am committed to them and this though and I still think positives can
come from this effort. And if it doesn’t, I consider the fact that I’ve
found you and your Initiative well worth the $1k I donated. I will
certainly keep you informed of any Unrig actions and communications, and
I’m here reading 90% of what you’re posting and I’ll be back in the
rhythm and be in touch.

Thanks so much
Love the Africa pictures