By raysongtree July 21, 2017 Everything Trump

Reuters News rarely offers news without an agenda. In this case as the second article below shows, the claim that U.S. is no longer arming “rebels” in Syria has no official statement backing it.

Students of the Iraqi, Libyan, and Syrian wars have seen, through the military plans discovered by Gen. Wesley Clark in 2001, that all these wars were designed to destabilize and dominate the region. All were for “humanitary intervention” against innocent leaders,  and ravaged these countries, killing millions. 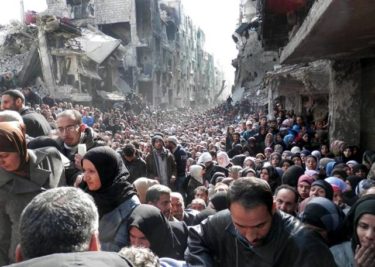 The destroyed nation of Syria as planned by USA and Israel

Trump was not exaggerating when he said Obama created ISIS.  Now the plot may be getting busted if this article by Reuters has any veracity. However, that is a big IF as we shall see.

click on image below to start 5 minute video of Gen. Wesley Clark

The U.S. decision, said one of the officials, [which one?] is part of an effort by the administration to improve relations with Russia, which along with Iranian-supported groups has largely succeeded in preserving Assad’s government in the six-year-civil war.

The CIA program began in 2013 as part of efforts by the administration of then-President Barack Obama to overthrow Assad, but produced little success, said the officials, both of whom are familiar with the program and spoke on the condition of anonymity.  [So, it is an unofficial rumor.]

[Then this article is based on an anonymous official of an anonymous agency or department? No official source, therefore, likely fake news.]

The decision [according to no known source] was made with National Security Adviser H.R. McMaster and CIA Director Mike Pompeo after they consulted with lower ranking officials and before Trump’s July 7 meeting with Russian President Vladimir Putin at the G-20 summit in Germany. It was not part of U.S.-Russian negotiations on a ceasefire in southwestern Syria, the two officials said.

One of the officials said [which one?]  the United States was not making a major concession, given Assad’s grip on power, although not on all of Syria, “but it’s a signal to Putin that the administration wants to improve ties to Russia.”

Trump is under intense scrutiny by Congress and a special counsel investigating Russian interference in the 2016 presidential election and whether Trump’s campaign had ties to the activity… [ but Congress is not investigating the ties between Clinton and Russia.] Russia has denied U.S. intelligence agencies’ allegations of Moscow meddling, and Trump has denied collusion between his campaign and Russians. [Reuters doesn’t mention that there is not one shred of evidence that there was any collusion but leaves readers buzzing that it is possible.]

A downside of the CIA program, one of the officials [anonymous and therefore probably non-existent. (Reuters is New World Order mouthpiece for Rothschilds)] said, is that some armed and trained rebels defected to Islamic State and other radical groups, and some members of the previous administration favored abandoning the program. [ISIS and IS are U.S/Israeli assets.]

Before assuming office in January, Trump suggested he could end support for Free Syrian Army groups and give priority to the fight against Islamic State.

A separate effort by the U.S. military effort to train, arm and support other Syrian rebel groups with air strikes and other actions will continue, the [make believe] officials said.

However, aside from air strikes after the [alleged] Syrian military launched a chemical weapons attack, the Trump administration has not increased military support from the limits set by the Obama administration.

US Continues Supporting Terrorists in Syria

It’s naive to believe otherwise. It’s central to US strategy since launching war for regime change.

Tactics alone changed from then to now, not Washington’s objective – allied with Israel and other rogue states to topple Syria’s legitimate government.

In response to Trump’s announced end to covert CIA-arming and training of so-called “moderate rebels” (aka terrorists like all other anti-government groups), Russia’s Information and Press Department deputy director Artyom Kozhin said the following:

“We have not heard anything regarding this decision from the official sources. Neither do we know about the status of other similar programs that could be implemented by other US agencies.”

“(W)e have expressed how we feel when it comes to the US flirting with militants in Syria more than once. We have forewarned that this flirtation could have unpredictable military and political consequences.”

“We repeatedly pointed to the Americans’ unscrupulous actions taken in Syria in the pursuit of their self-seeking geopolitical interests.”

“It is an open secret that a substantial number of militants who have been trained under the US Train and Equip program ultimately joined ISIS and al-Nusra.”

“We regard this as a repetition of the tragic story of Afghanistan and Libya. The potential consequences of this should be obvious to everyone.”

It has illegal bases in the country, established without Security Council or Damascus authorization.

According to CENTCOM commander General Joseph Votel, US forces will remain in Syria after the battle for Raqqa is over – on the phony pretext of stabilizing the region.

Washington wants northern Syrian territory occupied, along with other areas it’s able to gain control over – a scheme risking direct confrontation with Russia and Damascus.

Trump wants increased funding for US military bases in Iraq and Syria, reflecting plans for permanent (illegal) US occupation.

Saying it’s to continue combating ISIS is willful deception, concealing America’s support for the terrorist group and likeminded ones.

On July 19, Russia’s upper house Federation Council ratified a January protocol agreed on in Damascus to establish the legal presence of Russian aerial forces and support personnel in Syria for 49 years – to be automatically extended for subsequent 25-year periods.

It signifies Russia’s intention to challenge US, NATO and Israeli imperial designs on the country.

Separately in letters to the UN secretary-general and Security Council president, Syria demanded compensation from Washington and its “illegitimate coalition” allies for terror-bombing civilian targets and destroying vital infrastructure.

Damascus called for an immediate halt to US-led aggression, massacring tens of thousands of civilians, a demand the Trump administration surely will ignore.

Endless war and regime change remain its objectives, no matter the human toll.