By raysongtree November 18, 2016 Children, Everything Trump 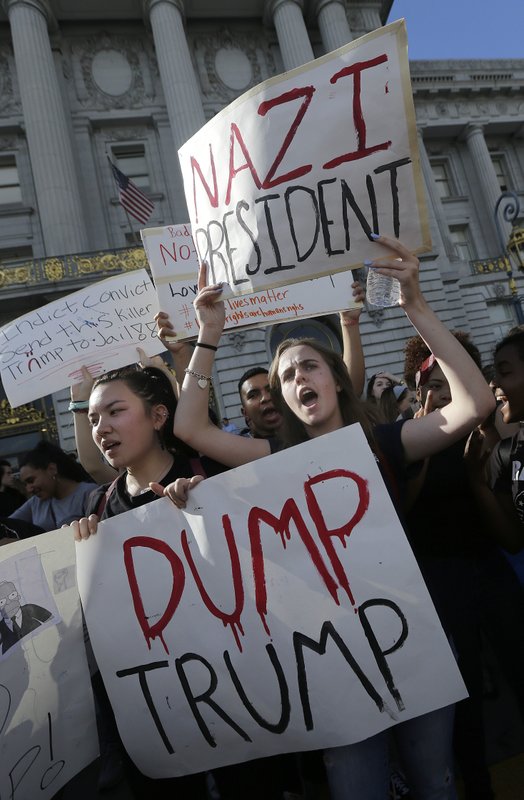 The anti-trump protests were organized by Move-on.org which is funded by Jewish Globalist George Soros.
Meanwhile an exit poll showed that Hispanics there voted overwhelmingly for Trump.
.

SAN FRANCISCO (AP) — San Francisco’s public schools have been offered a classroom lesson plan that calls President-elect Donald Trump a racist, sexist man who became president “by pandering to a huge racist and sexist base.” [Is the call for secure borders racism? Was Hillary’s husband, a serial rapist, not sexist? And Hillary herself?]

The union that represents city teachers posted the plan on its website and distributed it via an email newsletter to its more than 6,000 members. The school district has more than 57,000 students.

It is unclear how many teachers have used the plan outlined by a Mission High School teacher, but it appears to have the tacit support of city education officials.

School district spokeswoman Gentle Blythe said the plan is optional and not part of the official curriculum.

“Educators are entrusted to create lessons that reflect the California standards, support students’ social and emotional well-being and foster inclusive and safe school communities,” she said in a statement that neither praised nor rebuked the lesson plan. San Francisco schools serve diverse populations and teachers are encouraged to include multiple perspectives in lessons, she said.

“It’s inappropriate on every level,” said Harmeet Dhillon, an RNC committeewoman from California. She called it “inappropriate propaganda that unfairly demonizes not only the campaign that Donald Trump, the winner, ran, but also all of the people who voted for him.”

The lesson plan was written by social studies teacher Fakhra Shah, who said she hadn’t planned for it to spread citywide — that was a step taken by the teacher’s union. She wrote it at 2 a.m. Nov. 9, just hours after results came in, to help teachers at her school struggling with how to answer students’ questions and concerns about Trump becoming president.

“I think a lot of people were lost for words, wondering, ‘What do we say? What do we do?’ ” said Shah, whose Latino, African American, white, Muslim and LGBTQ students are worried about a surge in hate crimes since the election.

“We’re calling him out,” she said. “If he’s our president, I have the right to hold him accountable and ask him to take a stance that is anti-hate and anti-racist.”

The plan encourages teachers to let students express their concerns and to offer them hope and tell students that they can keep fighting. “We can uplift ourselves (and) fight oppression here at school even if we cannot control the rest of the country,” she said.

San Francisco is diverse, with many students whose families are in the country illegally and who are worried by Trump’s calls for deportation. She warned teachers that some students may use inappropriate words to express their fear and anger.

“I know that they might curse and swear, but you would too if you have suffered under the constructs of white supremacy or experienced sexism, or any isms or lack of privilege,” she wrote.

About 2,000 San Francisco students walked out of class last week to protest the new president. On Monday, Mayor Ed Lee declared that San Francisco would continue to provide sanctuary for all immigrants, religious minorities and gays and lesbians.

The union that represents teachers, the United Educators of San Francisco, defended the plan.

“There is a time and a place for using words that match action,” Blanc said. She praised the plan’s advice for students — “to stand up and defend themselves, and speak out for themselves and make a difference.”

Below by Mike Adams

(NaturalNews) In an extraordinary abandonment of education ethics, the dominant teachers’ union in San Francisco — the United Educators of San Francisco — has unleashed a “Lesson Plan on the November 2016 Election” that replaces education with the shockingly vile HATE indoctrination of children. The plan is so vile and emotionally destructive that it can only be called “emotional terrorism” against children.

As Breitbart.com’s Joel Pollak reports, “the guide informs teachers that ‘a racist and sexist man has become the president of our country by pandering to a huge racist and sexist base,’ and suggests they teach children the same.”

According to the AP, the hate-filled lesson plan, rooted in obvious bigotry and delusion, was distributed to over 6,000 union members in a district that provides education to more than 57,000 students. “It is unclear how many teachers have used the plan outlined by a Mission High School teacher, but it appears to have the tacit support of city education officials,” reports AP.

Authored by social studies teacher Fakhra Shah, the lesson plan reveals is that liberal educators no longer seek to teach their children anything about reality. Rather, they see children as vessels to be indoctrinate with hatred and bigotry so that they can be emotionally manipulated into joining whatever future uprisings the communist-leaning “leaders” of San Francisco have in mind.

Public education in San Francisco, in other words, has become a left-wing cult rooted in hatred, bigotry and emotionally-driven lies.

Welcome to the Divided States of America, where Californians can’t wait to secede from the union and declare themselves to be “Calizuela,” the next totalitarian failed state to be run into the ground by delusional liberals who can’t come to grips with reality.

Such hate-filled indoctrination of children will hopefully be declared a real hate crime by President Trump, and teachers who attempt to harm children with such emotional terrorism will be arrested and locked up where they can’t harm any more children.