By raysongtree April 16, 2020 letters and essays (Educational Comments only) 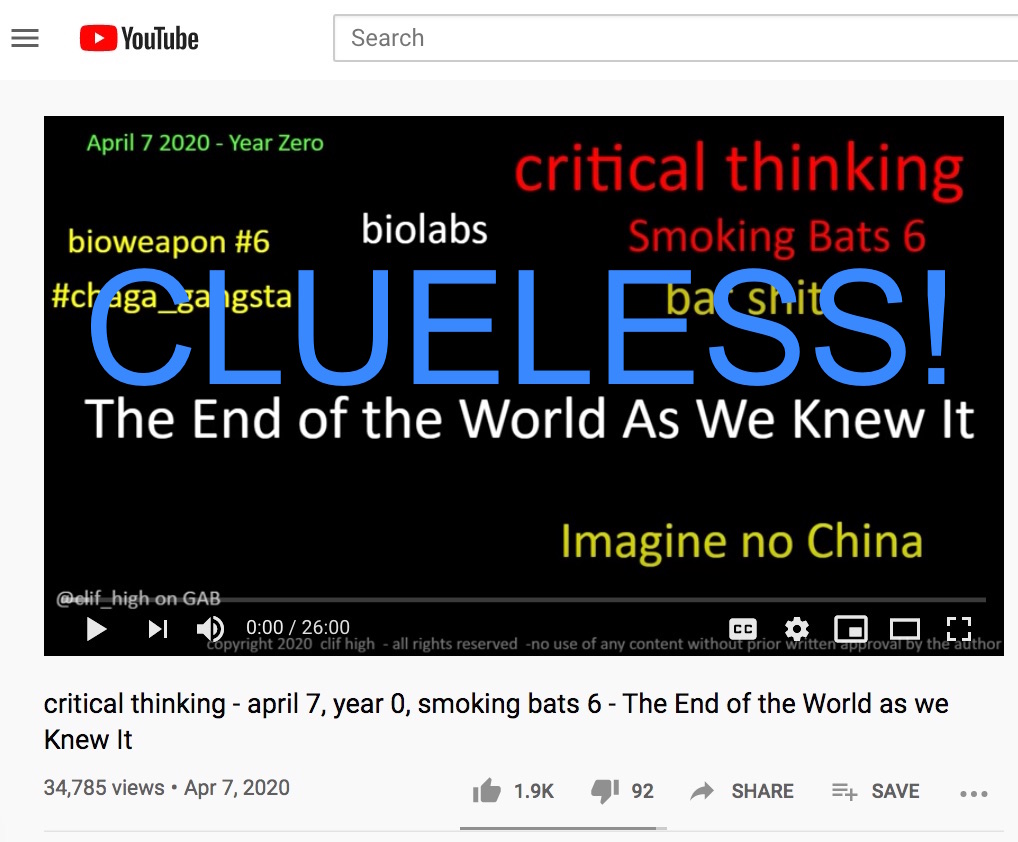 I was sent a Cliff HIgh video to watch. It was pitiful and here was my response…
Minute 1:40    He doesn’t understand it is media creation. He believes what he hears.
He doesn’t know the same deep state controls China and USA and it is a globalist operation, not a lab “leak”
Minute 3.00    He thinks it is a bio-weapon because “it” shut us down. Okay, I’ll keep listening, but my respect for him just vanished.  There is no “it,” there is a pandemic machine well honed since the swine flu for this slam dunk.
Minute 3:10    He doesn’t know the Spanish Flu was caused by introduction of radio waves. He doesn’t get the 5G connection, nor why Google is banning any video with virus/5G connection.

3:25   “It took China down” No it didn’t!  They are just culling. The CCP is not in trouble, they are more in control than ever. They are the model for global technocracy. Who will manufacture first, their factories or the factories that don’t exist in other countries?  Okay, he has no critical thinking but I will keep listening. OMG
China factory activity unexpectedly expands, but economy … Reuters
Factory activity in China unexpectedly expanded in March from a collapse the month before, but analysts caution that a durable near-term recovery is far from assured as the global coronavirus …
4:25 He thinks the tests equal infection. He has not seen through the testing which started before it was possible for a test to exist, and in fact, no test yet exists to identify this “virus” because it keeps mutating.
5:00 Because he thinks it was an accidental leak, he thinks there is only one bio-weapon. Not true. It was ALL planned before hand, and bio-weapons are unstable, so there could well be more than one intentional release already and more to come, and more than one bio-weapon.
I’m going to stop at minute 6:02 where he thinks China will no longer provide cheap stuff. I skipped to see how he ended it.
I thought Cliff High had an overview, but he doesn’t seem to have intuition like David Icke, Jon Rappaport, Henry Makow. He thinks he has clear thinking minute 24. Minute 25 he scolds others. He speaks of “viral load.” This has NEVER BEEN TESTED.
This plandemic is a cover for 5G so that all kids will be enhanced by 2030 as announced by World Economic Forum.
I don’t need to argue with him more. I’m surprised at his naiveté. I guess few people understand that we are being farmed by an outside force and there are no accidents in an operation this well organized.
****************
I added the above as a comment to his video. The comment before me was a week ago and look what it says…
Jake Jones
1 week ago

Strange…  I’m in Hong Kong and the factories that I deal with are producing and shipping to us here. I speak to our factory rep who’s a friend of mine and they’ve been back to work for over a month now. It’s a pretty big country, you know.

HERE is a Swiss site with updated statistics. I wish Cliff knew about this.

Below, click to begin.  Proof it is all organized, worth your time…