The Pope seems to flip flop on his view of family.  Three articles below.  There are over one billion Catholics world wide.

Pope Francis called on the Catholic church on Tuesday to stop clinging to conservatism and fundamentalism as a defensive response to the problems it is facing, and said the church ought to be “bruised, hurting and dirty” instead of obsessed with money and power.

The sweeping remarks before an audience of Italian bishops at a conference in Florence were a stark reminder of the way in which Pope Francis is trying to shake up a church that in many ways is losing relevance around the world, and continues to be battered by allegations of financial mismanagement and greed at the heart of the Vatican.

“Before the problems of the church it is not useful to search for solutions in conservatism or fundamentalism, in the restoration of obsolete conduct and forms that no longer have the capacity of being significant culturally,” the pope said.

“Christian doctrine is not a closed system incapable of generating questions, doubts, interrogatives. But it is alive, knows being unsettled … it does not have a rigid face, it has a body that moves and grows, it has a soft flesh: it is called Jesus Christ.”

The comments come at a critical juncture for Francis. Last month, a high-level group of bishops from around the world met at the Vatican and engaged in a vigorous debate over how the church ought to respond to changes in the modern family, including the prevalence of divorce.

While Francis has cast himself as a reformer who is seeking to portray the church as a less rigid and less dogmatic institution, which stands with people who live on the margins of society, there are factions in the church that are vigorously resisting his plea for the church to be more flexible and open. 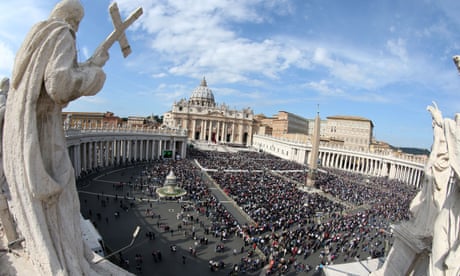 Under furious assault from conservative Catholics, the Vatican backtracked Tuesday on its surprisingly positive assessment of gays and same-sex relationships.
In a report Monday, the Vatican had said that gays and lesbians have “gifts to offer” the Christian community and acknowledged that same-sex couples can give “precious support” to one other.
The statement, an interim report from a closely watched meeting of Catholic clergy here, was widely praised by liberals. It is believed to be the first time the Vatican has said anything positive about gay relationships.
One longtime Vatican journalist called the statement a “pastoral earthquake.”
But many conservatives complained that the statement watered down church teaching and did not accurately reflect their discussions here, where nearly 200 Catholic leaders are meeting to debate pastoral approaches to modern family life….
*
Below, we see Pope embracing fundamental conservative view….
[Excerpt]

In his weekly audience Wednesday, Pope Francis gave dating couples some radically counter cultural advice, encouraging them to hold off on sex until they are properly married.

While the Pope’s words merely reiterated traditional Christian teaching on sex, they clash with a reigning mentality that advocates any and all sexual activity, provided it is consensual.

“In her wisdom,” Francis said, “the Church maintains the distinction between being engaged and being married—they are not the same.”

We should be careful not to dismiss this wise teaching lightly, which is borne out by the experience of conjugal love lived happily. The strong symbolism of the body holds the keys of the soul: we cannot treat the bonds of the flesh lightly, without opening a lasting wound in the spirit.

Courtship is a precious time for a couple to really get to know each other, Francis said, which isn’t the same thing as physical intimacy. “Many couples are together for a long time,” he said, “maybe even [sexually] intimate or living together, but they don’t really know each other.”

“It seems strange,” he said, “but experience bears this out.”

Francis complained that modern society undervalues the importance of courtship and preparation for marriage, while also failing to support young people ready to take this step. He said that “culture and society today have become rather indifferent to the delicacy and seriousness of this step.” And yet, he said, society “is not generous with young people who are really serious about making a home and having children! Indeed, often they pose a thousand obstacles, mental and practical.”

In the wake of the recent gay marriage referendum in Ireland, the Pope hit hard on the nature of marriage as a “covenant of love between man and woman,” which he also called an “alliance for life” and not merely a sentimental or sexual arrangement.

On Tuesday, Vatican Secretary of State Cardinal Pietro Parolin also slammed the Irish referendum, calling it a “defeat for humanity.”

Parolin said that the family will remain in the center of the Church’s concerns, and “we must do everything possible to defend it, assist it and promote it, because the family is the future of humanity as well as of the Church.”  ….