By raysongtree January 10, 2018 letters and essays (Educational Comments only)

I included Oprah Winfrey in my list of placed crooked celebrity women in Vol. 1 of my books..

This video summary (embedded below) by Paul Joseph Watson is excellent.  Watson didn’t include the private jet meeting with the top elite that Oprah attended.  That meeting clued me as to who she really is… a placed tool.

My point has been that every famous person we have ever heard of was MADE famous by the Rothschild controlled media that placed them in our heads and placed them in the position they have.  The movie Color Purple (1985), allegedly written by ex CIA agent Alice Walker, (who worked early with CIA Gloria Steinem) helped make Walker, Winfrey, and Whoppi Goldberg famous.  Walker would go on to co-opt Tracy Chapman.

Spielberg, the director of movie, was also placed, a nice Jewish boy who directs many New World Order, pro Jewish films.  Tom Hanks appears in Spielberg movies, as another puppet actor. He is in club, so was made famous. They were all placed in fame because they were obedient.

The Color Purple actresses are all “feminists” placed to destroy family. Black men screamed about that movie as clearly misandry at the time. Do you remember in movie that Whoppi’s mentor, the prostitute, was suggestively bi-sexual?  Second wave feminism was led by lesbians. Anti family.

Flashback: British Actress Says Weinstein Used Oprah to Lure … On Sunday night Oprah Winfrey lectured the nation and white males for the monstrous sexual abuse culture in Hollywood during her Golden Globes speech. Most all of the… thegatewaypundit.com/2018/01/flashback-british-actress-says-we…

Oprah pimping for Weinstein. Actress in photo is not Kadian Noble. Weinstein pinches her arm while Oprah holds her hand for support. Disgusting. 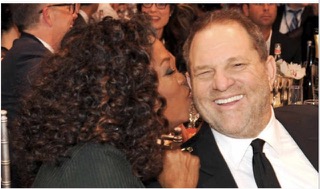 Not only did Winfrey know Weinstein abused women, she pimped for him and actively encouraged him.

The actress who has accused Harvey Weinstein of violating a federal sex trafficking … dailymail.co.uk/news/article-5125237/Harvey-Weinstein-sex…

In video (link below), Paul Joseph Watson covers Oprah – Weinstein relationship well and he offers a petition to sign. By the way, Hillary Clinton had a summer home next door to Weinstein.  This, for tunnels and satanic child rape. Hillary is a satanist.  So is her daughter, who is not Bill’s child.

Oprah, like the other women that I cover in Vol. 1, was a raped, disassociated, mind controlled slave, and as a result lies with every breath she takes.

“Absolutely everything changed in my life as a result of The Color Purple,” Oprah says. “It was faith, it was hope, it was belief, it was possibility, it was love, it was everything.”

Liar. How many times were you used as a teen? Why were you so trusted to be handed fame? What club did you support all these years and what agenda did you really work for?  What new age selfie indulgence did you hold the flag for? And what whistle blowing have you ever really done?

Besides spreading me me me me self-indulgence, what does your brand represent?

Watson explains why a petition could reveal her, if she ignores petition and for that reason, why everyone should sign it. 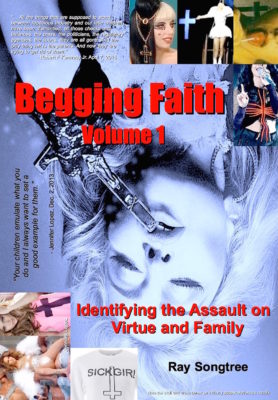