Why Monotheism Sucks and Israel is Founded on the Matrix

By raysongtree October 1, 2017 letters and essays (Educational Comments only)

Is this book anti-Semitic? It’s one thing to refer to Zionist fundamentalists, such as Netanyahu – or Rothschilds, but the whole Jewish religion… ?

I will attempt to address your question briefly.

There is no such thing as “anti-semitic.” This was made up by the people who think they are perfect and never make any mistakes. Namely the Anti Defamation League, or ADL.

In this particular incarnation, this body I have now has pure Ashkenazi Jewish blood,  so no one can say I am racist against my own family.

In my opinion, the Jewish pathology started with the channeled entity that used Moses and claimed to be the all and all. This channeled entity enslaved some Hebrew people several thousand years ago,  but they are pretty much extinct now.

The Talmud religion coming out of Europe and the adoption of this morphed religion by Kingdom of Khazar in 740 AD does not reflect original Judaism.  90% of so called Jews are from Khazar, Caspian Basin, not Palestine.  Therefore, most Jews are not genetically Hebrew, and certainly not semites (a language group).

So what does “anti-semite” mean when European Jews are not semites, not genetically related to the ancient Israelites, and don’t follow original Judiasm but follow the very corrupt Talmud?

Neither of us have probably ever met a semite (which is an old language group) of the Jewish faith. The vast majority of semites are Muslim. The root language of 90% of Jews is Yiddish, not semitic.  So, let’s  not use a nonsensical word like anti-semite, when it is a lie that European Jews, white people like you and I, have Hebrew roots. We don’t.

If you think you yourself are Jewish or anyone you know is Jewish, this is the matrix of deception.  I am a de-programmer.  Please understand that there are no good programs. What is good is to be free of programs.  We are not some being that can be labeled by someone else.  We are the ear. We are beginning-less.

The entire monotheistic trip is messed up! The concept of monotheism is a giant hijack of truth.

There cannot be only one godhead in Infinity.

This is why there can be no Creator, since infinity cannot have a beginning.

This is a very simple realization.  Not enough people contemplate the meaning of infinity. This understanding leads to humility, while the lie of a beginning and knowing THE TRUTH, leads to arrogance.

I could say that arrogance has an arrogant beginning, while humility has no beginning, it is beginningless.

Please take some time to contemplate, because humility is a true achievement.  It will reset many things for you.

Buddhism is founded on the realization that the infinite cannot be mapped.  All maps are limited bullshit. So Buddhism, a non-monotheistic religion, teaches clarity and respect for other, not mind programming and disrespect for other.

Mapping and arguing about maps is what monotheistic people do, because they know THE truth. “My map is the only way to heaven! My truth is based on the one and only God who created everything. See, it is in my book which is the only true book!”

Doesn’t that sound insane? The Judeo trip is insanity in the eyes of every culture in world, other than Christianity, Islam and Mormonism, as they buy the monotheism.

For all indigenous cultures, monotheistic people who claim to know THE truth are mad, and demonstrate their insanity by destroying the environment where ever they go.

The new god these days is “progress” and in the name of “God” (Progress) we will destroy whatever we want to.

In my opinion, the historical Jew who we call Jesus, was not a monotheist. That, exactly, is why he was so threatening to the arrogant monotheists.

The cancerous problem on the planet is monotheism headed by the bankster Rothschilds, who are satanists, and this is why Jesus said “the Synagogue of Satan.”  I agree with Jesus, Judaism is satanism.

It might take some time to contemplate what I am discussing.

Thousands of other cultures feel that monotheism is the bedrock which domination is built upon. Why? Monotheism breeds this strange idea which I’ll repeat…. “I know THE truth.   THE one and only TRUTH from the one and only GOD.”

No indigenous culture has this arrogance. They live with nature, in nature, not on top of her. Nature teaches humility, not vanity. In the wilderness we hear our vanity and with time we drop it to learn to listen. We return to the unprogrammable ear.

Monotheism is always dangerous. In  “I know THE truth” vanity and exceptionalism is the excuse for collateral damage. Therefore, as history has shown, modern war is built on monotheism. The territory desired by monotheists is the territory of the mind. They will kill you if you disagree.

The very real beings behind monotheism have the objective to make sovereign humans into industrial slaves. We are being mined. To accomplish this, the ear of discernment must be replaced with a mind program and a proud one. If you believe something, you can be led. If you don’t, then you cannot be led because you are still sovereign. We must be proud of being slaves! The pride actually sabotages our sovereignty. Sovereignty is based on connection to land base, and connection is not a belief, it is an awareness.

So, in order to make us good slaves, we are given a mind program to identify with, when we really should be identifying with nature and respect for other.

This vanity is also manifest as attack on women and natural world.
(See CNN article below)

The entire monotheistic trip is a mistake because it breeds arrogance, and that is the root of why the planet is now being killed. Satanism has to be exposed, and the satanism inside Judaism must be exposed.

This begins by abandoning monotheism.

“I do not know the truth. I don’t ever want to know THE TRUTH. I want to always be awakening to new truths.”

CNN = NWO. This article below perfectly affirms my thesis about the New World Order. It is vanity vs. nature, going all the way back to…

Genesis 1:26: “And God said, Let us make man in our image, after our likeness and let them have dominion over fish of the sea, and over the fowl of the air, and over the cattle, and over all the earth, and over every creeping thing that creepth upon the earth.”

This shows clearly the re-set we need. We need to stop the adversarial relationship with nature, where people’s highest aspiration is to go to heaven or get on a space ship.

Right here on this organic Earth is where we manifest balance and relationship.  It won’t be some place else.

We each need to drop this idea of a chosen people who have dominion over nature. We must drop the arrogance of monotheism that violently rejects idea of infinite sources. There is not one godhead! Every bit of reality is a source. Everyone is IT. No one should be a follower.

I call this “Indigenous Re-call, the Return to Sanity.”

“In a widely publicized article, CNN claims that calling breastfeeding “natural” is bad because it might encourage women to engage in other “natural” behaviors. (What, like vaginal childbirth?) If you’ve ever wondered just how much the pharma-controlled mainstream media hates the bodies of women, check out my article and video commentary that totally berates CNN for insulting the bodies of women. 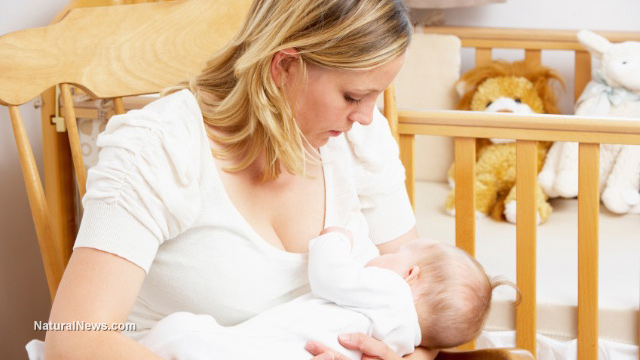 (NaturalNews) Big Pharma-funded CNN has declared its own special war on women by assaulting any categorization of breastfeeding as “natural.”

It’s harmful to call breastfeeding “natural,” says CNN in this astonishing demonstration of medical illiteracy, because it might encourage women to engage in other “natural” behaviors. CNN, which is funded by pharmaceutical interests, harkens back to the days when infant formula manufacturers told women that breastfeeding was a barbaric practice and should be replaced with factory-made infant formula. (Look up the history of Nestle…)

Now, CNN wants to make sure women aren’t encouraged to pursue anything that might be called “natural,” starting with breastfeeding (but not stopping there). No doubt we’ll soon see CNN’s war on women expanded to attacking menstruation and vaginal childbirth, too, with news reports attacking the vagina as an “outmoded birth canal” that should be avoided through C-section birth procedures carried out by “modern” doctors who are smarter than Mother Nature.

CNN’s greatest fear, of course, is that women might begin to see vaccine injections as a type of “artificial immunity” — which they are, of course — and begin to reject them. Thus, the network believes that the best way to ensure vaccine compliance among women is to start berating breastfeeding and assaulting anything a women does that might be considered more “natural” than being injected with a cocktail of dead viruses blended with mercury and aluminum.

No doubt CNN would also be terrified of women teaching their children home gardening skills or methods for making medicines out of herbs. Such “natural” things can never be tolerated in a society dominated by pharmaceutical interests and state-mandated media propaganda dished out by the pharma-corrupted CDC. (See the astonishing “vaccine racket” infographic here.)

CNN, in other words, has gone “full retard” on the issue of women’s health. This is the same network that claims anyone who opposes partial-birth abortions is attacking women’s health; yet somehow breastfeeding is bad at CNN, where nourishing a child with mother’s milk is somehow considered a bizarre, barbaric act.

Maybe that’s why CNN reporters are whiny little crybullies. Nobody ever breastfed them! … and they were raised on nutrient-depleted infant formula and brain-damaging vaccines!

Click here to listen to my full podcast or listen below: