Heads Up for Bruce Jenner Apologists

By raysongtree June 9, 2015 letters and essays (Educational Comments only)

This first video is an overview about Jenner and Transhumanism.

When the controlled media endorses someone and gives them awards, we need to take notice. This woman below did. A little heads up from a real woman for  Bruce Jenner, the Illuminati promoted wrecking ball.

How compassionate she is to identify with the grief of his wife,  a rich white woman.

We need to see Mama Bear stand up like this woman below. Everyone needs to be Mama Bear. We have sanity to protect!

Warning. She has not been lobotomized by New Age social engineering. She is Mama Bear in your face.

The Bruce “Caitlyn” Jenner, “I always felt like a woman,” is an Illuminati Goddess Ritual. It is purposely done to propagate transgender acceptance/homosexual lifestyle. Which leads into intentional psychological confusion between the sexes. This is a cleverly designed tool of population control! Also, Bruce Jenner “sacrificed” his manhood because of the requirement to provide a blood sacrifice when told to do so by the Illuminati. Since Bruce did not want to sacrifice any of his family members, he sacrificed “himself” instead…which was a suitable and acceptable offering to the Illuminati higher-ups. By sacrificing his manhood, there are rumors that Bruce “Caitlyn” will be given “its own” show. “Its” bank account will improve to at least 100 million more green shit because of the acceptable sacrifice given by shim or “Caitlyn” Jenner to the Illuminati. This is how “Caitlyn Jenner” came into existence.

Jesus, Ray, you actually rot your mind with stuff like this???  That black woman has way too much time on her hands and “N” is has way too fertile an imagination.

Man, give it a rest, this is Looney-Tunes crazy shit.

And since when does someone who is transgender need to manifest the biological organs/processes (menstruation) of the gender they identify with??

You don’t seem to understand what social engineering is. The controlled media exists, not to make money, but to socially engineer the masses. And we suck it up because they have us by the genitals, literally. Sex sex sex.  It is quite amazing. It is like being given a tasty treat that is spiked with a drug.

Jenner is being promoted in the controlled media. Remember it is controlled media. You’ve studied this. Controlled media is for controlled culture. That means what YOU think. They control your own talking points.  You repeat what the mainstream tells you. Your repeat how they want you to think. You have new words in your vocabulary now. Who taught you those. What attitudes, decisions, behaviour are based on these learned new ideas?

You probably think there is such thing as a “homophobe” right?  There isn’t!  This is divide and conquer speech created by the CIA who were behind the book After the Ball, the 1989 blueprint for gay activists.

Apparently you think there is such a thing as a “transgender person” and that these people are born this way, right?  They have to have sex with the same sex and wear makeup because they have no choice, poor things. Is that what you have been told to think?

Did you have any thoughts about transgender 40 years ago?  You did not. The controlled media/culture hadn’t fed you those talking points yet. There is no such thing as a transgender!  It is like Santa Claus. The words exist but there is no Santa Claus. It isn’t real. No one can change their sex. No one has and no one ever will, and Santa Claus will never be real.

The wake up has to happen. Other people are waking up and I suggest you don’t miss the bus. N is correct. Look into blood sacrifice required by many celebrities to succeed. Jenner is now famous. I never heard of him before. Did you? That was what he wanted and this was his ticket. Everything he has done was to pay for the ticket, including cutting his own —-.  The deal was, if you want to be promoted, “What will you do to prove your submission?” That is the satanist contract of fame.  If you don’t go along, no one will ever hear of you.

We only hear what the controllers want us to hear of. They control the culture by controlling the voice of the culture, which is the media. They placed Jenner now in our minds, and he will get his TV show, and influence more people to the new normal, which is completely not normal.

They placed him in your mind. This is the point. N said it,  “This is how “Caitlyn Jenner” came into existence.“

Do you understand that our world/culture/minds is run by pedophile, human sacrificing, card-carrying satanists. Please study it. Jay-z was on front cover of CIA Time magazine for 2013, 100 most influential people. He is a card carrying satanist. Beyoncé is his slave, given to him by her former handler, her father. He is promoted because he pays the price and obeys. We only have heard of these people because they were in the club. We don’t hear of anyone else. Anyone else is censored, dropped, smeared. 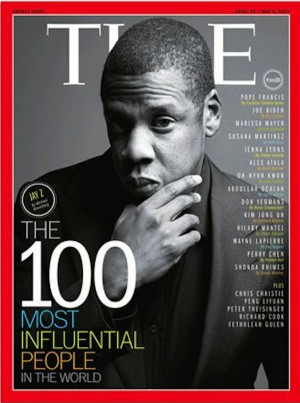 JayZ clothes line with Satanist Aleister Crowley motto, “No taboos, anything goes, no morals, be as self-serving and abusive and disrespectful toward tradition and society and others and even children, as you want.” Crowley was a bi-sexual, some say a pedophile, who contracted syphilis from all the prostitutes he used. He was utterly obsessed with sex and his books are read by Illuminati successful entertainers as required by their boss. Most entertainers must be into same sex and infidelity or they won’t be promoted.

Bruce is not a real woman, no one can change their sex, and the woman in youtube IS a real woman and is standing up like Mama Bear for all real women.

I will never recognize a fake phony who tries to appear opposite of what they were born.  They can imagine anything they want, I don’t have to go along with their delusion and support them in their fantasy and denial of their real gender. They can do what they want in private, but when they go public, I am the public also, and like the woman in youtube, I don’t have to buy their delusion. Their opinion is that gender is a choice? My opinion is it is not. I support REAL people, not fake people. A woman is more than make up and a bra. Much more. I honor that. I honor Real women.

The controlled media wants us to dishonor REAL women.  That is the point!

Another example… of reverse logic.

Many so-called feminists are lesbians. If they are lesbians, then we have to ask,  “Are they real women in a real yin-yang relationship with real men?” They are not. So how can they stand up for the feminine?

Are they real women who can stand up for what REAL women need, in order to be strong REAL women? They cannot.

Feminism is CIA. Gloria Steinem was and is a documented CIA agent. Ms. Magazine is a CIA publication.  That is subject of the new 80 page introduction to vol one of my book.

Bruce never ovulated, he never menstruated, and no matter how much estrogen he takes, or hair he removes, or silicon he injects in his chest, he will never have a woman’s DNA. He is a man. An artificial thing with a bra is not a real woman. If Bruce was around wild animals, real animals, would they perceive him as a man or woman? Well I am not domesticated, and I would perceive him as a man.

Bruce Jenner, as the youtube says, is selfish, which is exactly how New World Order and controlled media want us all to be. By supporting his delusional selfishness, we dilute and delude ourselves. We are being taught to put the satisfaction of our own selves as number one. There is nothing noble in this value system. There is never sacrifice. It is all about me me me. Instant gratification is the priority.

He can leave his wife. Then he should leave her alone. But to ask her to support him no matter what he does, and have media criticizing her… that flipped the youtube woman out, because she is grounded and knows what complete BS smells like.

Here is a discussion on youtube of the context of Bruce Jenner’s big show. Click on image to start.