By raysongtree May 5, 2020 Everything Trump, letters and essays (Educational Comments only)

See my comments in CAPS.  This is a pre covid article however it was brought to my attention in early May 2020

Trump and the New World Order

Oct 1, 2019  by Dr. James Veltmeyer  The ongoing attacks by the political establishment on President Donald Trump – which began even before he was elected – are without parallel in history.   The savagery, frenzy, and outright hysteria displayed by the President’s enemies within the Democrat Party, the media, and the various power centers of the globalist elites have no prior precedent.
This President has been spied on, lied about, made the subject of phony foreign dossiers, insulted, ridiculed, scorned, mocked and threatened.   We have witnessed Hollywood celebrities advocate for blowing up the White House, demand the President be beaten, jailed or even assassinated, and his children tortured and sexually abused. We have seen politicians in Washington try to convict the President of non-existent crimes, investigate him and his family members for everything from tax returns to guests at his hotels, project on to him crimes that they themselves have committed, and seed his  Administration with leakers and double-agents.
No other President in American history has been treated   in such a shameful manner. Not Lincoln. Not FDR. Not Nixon. Not Reagan.
What is it about this President that has roused such demons [CORRECT] in his political foes?   What is it about this President that drives his opponents to the brink of insanity?   What is it about this President that so terrifies and terrorizes the Pelosis, Schiffs, Schumers and the George Soroses?   [AND BRENNAN, COMEY, ETC.]
Is it simply that he is not part of the club, a brash outsider with a different style???   YES THAT IS EXACTLY THE REASON, HE IS NOT PART OF THE SATANIST CLUB. AND HE HAS ANOTHER CELESTIAL TEAM PROTECTING HIM
Is it merely because he’s outspoken and tramples on political correctness???
Is it because he’s sometimes unpresidential in his demeanor (at least in their minds)??
Not at all.  After all, aren’t these the same folks who loved Bill Clinton whose extracurricular activities involved cigars and staining blue dresses in the Oval Office??
Of course, Clinton was beloved by [BELONGED TO] the globalist elites who pull the strings on world governments. He gave them NAFTA, after all.   He gave them the WTO.   He made tens of billions of dollars for them and their stockholders through these unfair trade deals that cost America five million manufacturing jobs and closed 70,000 factories.   He also gave the military-industrial complex plenty of profit-making military interventions, from Haiti to Bosnia to Serbia and Iraq. Bill Clinton, for all his corruption, delivered the goods for the New World Order.   AS DID BUSH JR AND OBAMA.
Donald Trump, of course, never played ball with these globalists.    TRUE
He was elected explicitly on an anti-globalist platform that put America first.    TRUE
From day one, he started to implement that America-first agenda, earning him the undying enmity of all those whose profits are secured by selling out American workers, American jobs, and America’s national sovereignty.  [THE AUTHOR IS FOCUSED ON MONEY, WHEN HE SHOULD INCLUDE THE CONDEMNATION OF GOOGLE AND FACEBOOK WHICH IS ABOUT CONTROL, NOT MONEY. THE NWO DOESN’T EXIST TO MAKE MONEY, IT EXISTS TO GAIN TOTAL CONTROL.]
President Trump pulled us out of the TPP.   Billions in lost profits for the globalists.  [MOST OF USMCA COMES DIRECTLY FROM TPP. WE’LL SEE WHO PROFITS.]
President Trump pulled us out of the job-destroying Paris Climate Accords.
Billions in lost profits for foreign nations like Communist China, at our expense.
Read NASA’s Report. [NO LINK, SO NOT SURE WHAT HE MEANS. ]   President Trump began the process of securing the U.S. border.  Billions in lost cheap illegal immigrant labor for the Business Roundtable.
President Trump imposed tariffs on China, becoming the first President ever to address Beijing’s annual $500 billion rape of our economy.  Billions in lost profits for corporations who ship our jobs to one of the worst tyrannies on the planet. [TRUE]
President Trump renegotiated  NAFTA.[NO, HE DID NOT,  DIRECTLY FROM TPP.  HIS TARIFFS DID THE JOB.] Again, billions in lost profits for the cheap labor crowd.

President Trump launched the process of extricating the U.S. from endless foreign wars and avoiding new wars with nations like Iran and North Korea.  [NOT SO, SEE THIS   https://www.globalresearch.ca/trump-imposes-new-sanctions-amid-continuing-war-threat-against-iran/5681771 , BECAUSE REMEMBER, TRUMP RESPECTS NETANYAHU, RECOGNIZED JERUSALEM WHICH IS PALESTINE AND GOLAN HEIGHTS WHICH IS SYRIA, AS PROPERTY OF ISRAEL. ISRAEL HATES IRAN, AND THUS, SO DOES TRUMP. ]
Billions – perhaps trillions – in lost profits for the globalist war machine.  [FACT – TRUMP BOASTS OF BUILDING UP WAR MACHINE. ] Is the picture becoming a little clearer? [ONLY IF ONE HAS NARROW VISION AND INTOXICATED BY HOPE PORN.]
In each instance, the President’s policies have represented a dramatic upending of the globalist agenda [WHICH IS NOT ABOUT MONEY, IT IS ABOUT CONTROL] of both parties, the Carter-Bush-Clinton-Bush-Obama agendas of continuous war and the continuous looting of America’s wealth and hollowing out of the American middle class. TRUE
With both parties and their representatives in Congress beholden to campaign donors [AND WITH REPRESENTATIVES PLEDGING TO SUPPORT ISRAEL] whose profits are threatened by Trump’s America-first initiatives, is it no wonder that both Democrats and Never-Trump Republicans, all Globalist-Socialist, are determined to bring this President down?
TRUMP HAS CREATED A SPLIT AMONG GLOBALISTS, WHICH IS PERHAPS PERFECT.  SHOULD GLOBALISTS HATE TRUMP WHO LOVES NWO ISRAEL?  HE HAS SPLIT THEM.
Most of the mass media is controlled by these same global corporations.   TRUE After all, doesn’t Amazon’s Jeff Bezos – the richest man in the world – own the Washington Post?   NO, THE CIA OWNS IT, BUT BEZOS IS KEEPING IT AFLOAT.  As was said in Watergate, just follow the money. [WATERGATE WAS A SET UP BY KISSINGER TO PUT NELSON ROCKEFELLER AS FORD’S VP AND GET NELSON IN THE BACK DOOR. AGAIN, NOT MONEY, BUT CONROL.]
And while you’re following the money, see if it leads to a $500 million left-wing slush fund run by a shadowy George Soros and Clinton-linked group called Arabella Advisors which is funding the anti-Trump political agenda through dozens of high-sounding front groups.
Folks, the New World Order gang is in full retreat all over the globe. [THE PANDEMIC IS NOT A RETREAT, BUT THIS ARTICLE WAS WRITTEN IN SEPT. 2019 BEFORE THE PLANDEMIC]  From Brexit in the UK to the populist governments of Hungary and Poland to the Yellow Vest movement in France and Salvini in Italy, [ALSO HONG KONG] the middle and working classes are demanding the overthrow of their nation-destroying overlords.
The overlords who have flooded [AND ARE STILL FLOODING – APRIL 2020] their countries with unassailable immigrants from North Africa and surrendered their sovereignty to the European Union and its unaccountable bureaucrats in Brussels. They have lived the unfulfilled promises of the globalists, that giving up national sovereignty and relocating jobs abroad would usher in a new era of peace and prosperity.  The exact opposite has happened. The globalist vision has resulted in $7 trillion of pointless wars  in the Middle East [NOT SO AT ALL, THE WARS ARE NOT POINTLESS, THEIR EXPLICIT PURPOSE IS TO CREATE GREATER ISRAEL], an immigration crisis, the loss of jobs, and declining standards of living. [WHICH WAS INEVITABLE. THE AMERICAN DREAM IS BASED ON OVER CONSUMPTION.]
In the United States, Donald J. Trump has emerged as the New World Order’s most tenacious and determined foe as he fights the good fight for the American people, our constitutional rights and liberties and the sovereignty of our nation.  TRUE, BUT REALLY HE IS FIGHTING FOR HIGH CONSUMPTION, WHICH IS NOT SUSTAINABLE. He is an existential threat to the New World Order.   TRUE  Unlike other Republican presidents of the recent past, he can’t be bought and has no price. [HE IS ALREADY BOUGHT. HIS DAD WAS A ZIONIST] Unlike them, he doesn’t give in [I DON’T KNOW ABOUT THAT. HE SUPPORTS 5G, WHICH IS NOT EVEN ON THIS WRITERS RADAR] [NO PUN INTENDED ] and he doesn’t give up.
[NO MENTION OF ISRAEL. NO MENTION OF CONTINUING US MILITARY ACTIVITY IN MID EAST. NO MENTION OF 5G OR FRACKING.  US PROSPERITY IN LAST FEW YEARS IS DUE TO TRUMP ALLOWING UNLIMITED FRACKING FOR TEMPORARY OIL PRODUCTION AND PERMANENT POLLUTION OF WATER TABLES.]

Go ahead, globalists. Try your impeachment games. Try your Senate trials.  It won’t work. In fact, it will backfire on all of you [YES IT IS TRUE NOW AS THE COVID SUMMER COMES. THE BLUE STATES ARE GOING TO GET PISSED THAT THEY ARE STILL SHUT DOWN] as – after three years of trying to prevent the Electoral College from voting for Trump, stopping the inauguration, unleashing Jim Comey and the FBI, CIA spying, Robert Mueller and his phony Russiagate probe, tax returns, emoluments, Kavanaugh, and all the rest — the patience of the American public is wearing thin. We aren’t as stupid as you think. Something you will recognize clearly come November 3, 2020.

[USING OUR PRAYERS OR FOCUSED PSYCHIC INTENTION, WE MUST HALT  A  SECOND GLOBALIST BIO-WEAPON THIS SUMMER, OR THERE MAY BE NO NEW ELECTION.   REMEMBER, DR. ANTHONY FAUCI FUNDED THE WUHAN BIO-WEAPON LAB]

“How little do my countrymen know what precious blessings they are in possession of, and which no other people on earth enjoy!” ― Thomas Jefferson

[THE INDIAN GENOCIDE KILLER WHO DESTROYED THE CHEROKEE NATION AND THE THIEF OF THE LOUISIANA PURCHASE BOUGHT FROM THE FRENCH!  THOMAS JEFFERSON WAS A SLAVE OWNING GENOCIDE ELITE GLOBALIST! LETS GET HISTORY RIGHT DR. VELTMEYER. ]
SEE RELATED ARTICLES.  SEARCH “TRUMP” IN TOP BAR 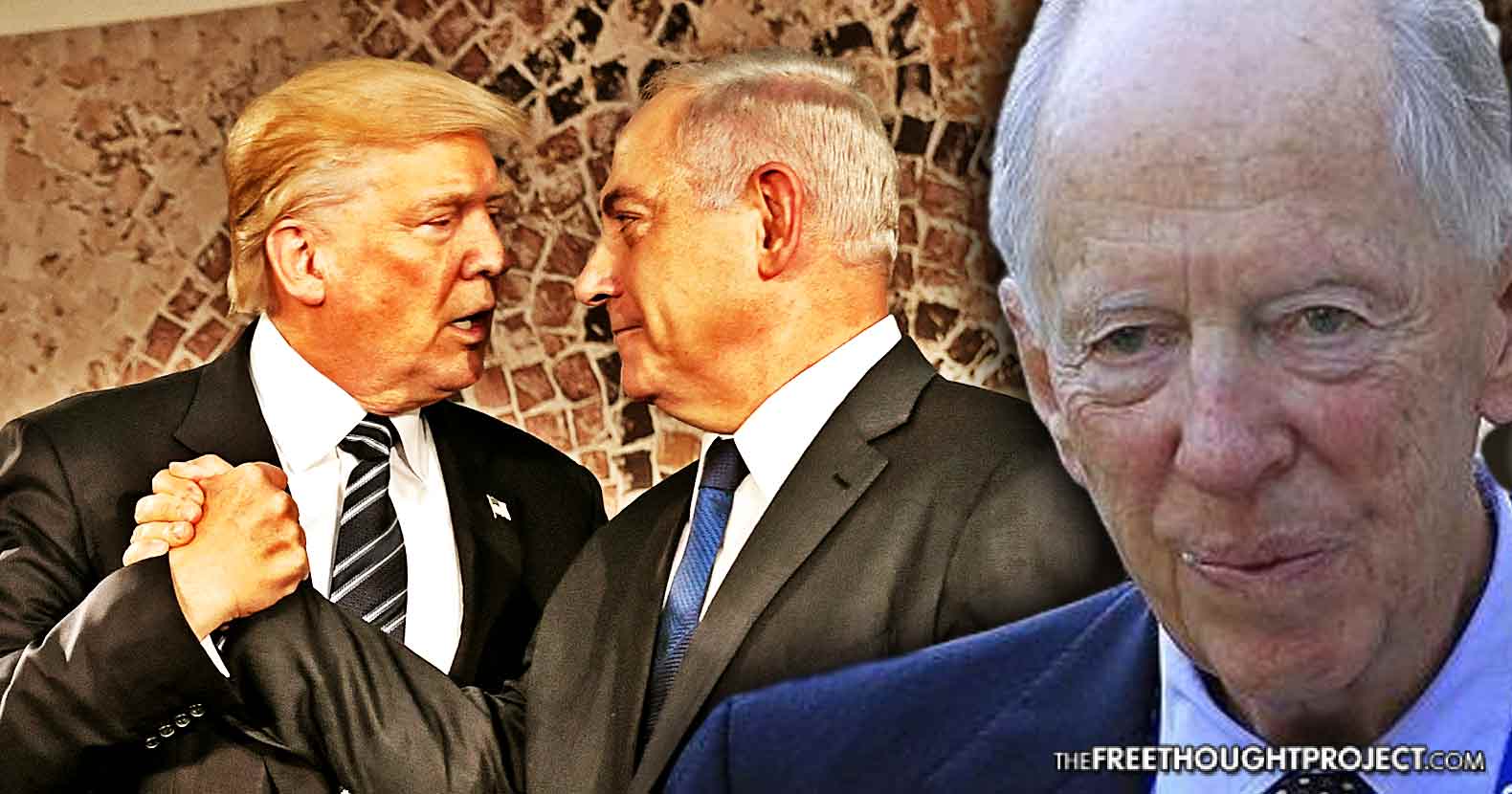