By raysongtree January 14, 2017 Everything Trump 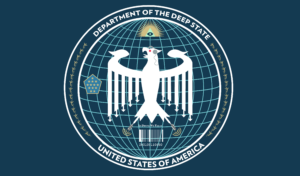 Journalist Glenn Greenwald, who is not a fan of President-elect Trump, appeared on Tucker Carlson tonight to discuss the dangerous ongoing effort among powerful anti-Trump factions within the US Government’s “Deep State,” who have collaborated with members of the Democratic Party and the traditionally liberal media to inflict maximum damage on the incoming President. Recall Senate Minority Leader Chuck Schumer’s ominous “six ways from Sunday” comment from 10 days ago.

Greenwald, an accomplished litigator, journalist, and author, does a masterful job illustrating the players, motives, and potential fallout from this dangerous effort within the US Government’s intelligence apparatus. Greenwald goes deep, discussing how Trump’s election ruined the plan for regime change in Syria, specifically mentioning, among other things, that the deep state was waiting for Obama to leave office before executing their plan:

The number one foreign policy priority of the CIA over the last four to five years has been the proxy war they’re waging in Syria to remove Bashar Al Assad – and Hillary Clinton was quite critical of Obama for constraining them. She wanted to escalate that war to unleash the CIA, to impose a no-fly zone in Syria to confront Russia, whereas Trump took the exact opposite position. He said we have no business in Syria trying to change the government, we ought to let the Russia and Assad go free and killing ISIS and Al Quaeda and whoever else they want to kill.

He [Trump] was a threat to the CIA’s primary institutional priority of regime change in Syria. Beyond that, Clinton wanted a much more confrontational and belligerent posture towards Moscow, which the CIA has been acrimonious with for decades, whereas Trump wanted better relations. They viewed Trump as a threat to their institutional pre-eminence to their ability to get their agenda imposed on Washington.

What you’re seeing is actually quite dangerous. There really is at this point obvious open warefare between this un-elected, but very powerful faction that resides in Washington and sees Presidents come and go – on the one hand, and the person that the American democracy elected to be elected on the other. There’s clearly extreme conflict and subversion taking place. ‘

This really is a must-watch, and goes hand-in-hand with Tucker’s interview with Dr. Stephen Cohen this week:

Meanwhile ex-spook and security consultant John Schindler – who is very clearly part of the faction to remove Trump by any means, sent out a tweet yesterday which mentioned “taking traitor Trump out now.”

This is overt, and Schindler also just more or less outed Washington Post’s David Ignatius as a CIA mouthpiece (along the same vein as Deep Throat, perhaps we can refer to Ignatius’s source as Golden Shower?).

This cavalier attitude towards assassinating Donald Trump has been supported by social media giant Facebook: 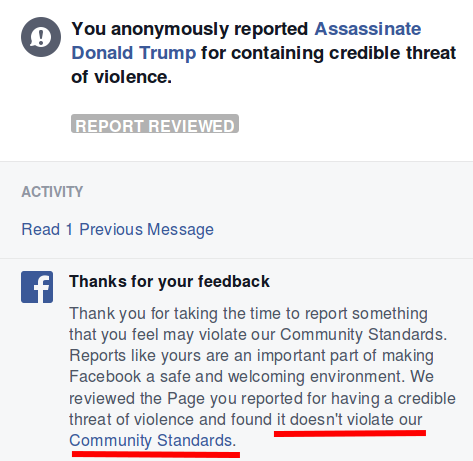 And nothing, to the best of my knowledge, has been done about the multitude of death threats Trump has received – including ones from individuals who have visited the White House and have CIA connections. 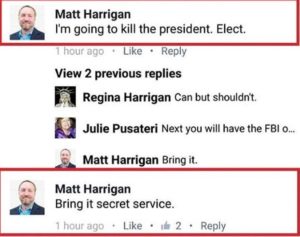 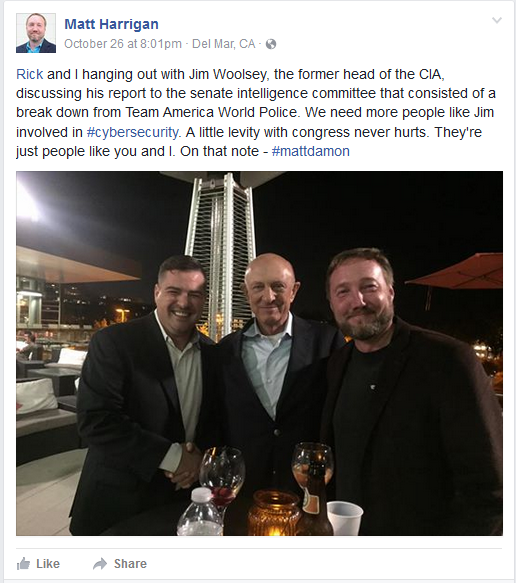 Meanwhile 8 years ago, a La Mesa, California man was charged, arrested, and thrown in a halfway house for 60 days for going on a drunken, racist, profanity laced online tirade against President-elect Obama ending in “he will have a 50 cal in the head soon.” – a conviction which was later reversed when the threats were found to be not credible.

Perhaps the secret service is merely spread too thin to investigate these threats, or perhaps President-elect Trump is wise to have his own private security.