By raysongtree June 24, 2015 letters and essays (Educational Comments only)

Read this interpretation on crop circle, then my reaction… 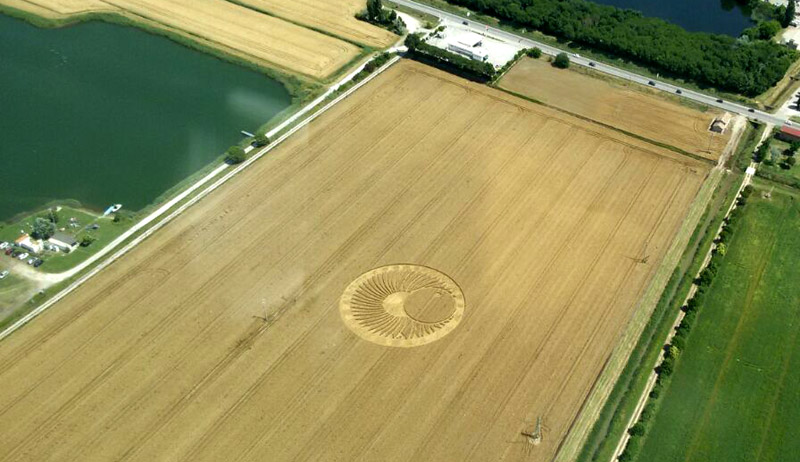 I find the comment to be really …. um….. spacious to put it mildly.

In my opinion the last thing we need is new tech, so what good are mathematical messages?

Okay, I will share the flash that came when I asked about this.  Crop circles are human made from aircraft with some advanced technology to create more distraction.  It is some kind of pulse kind of tech, that does a crop circle in one instant.

After all these years, if there was an intelligent group trying to communicate something, do you think they would keep soliciting stupid responses?

The more stupid speculation, the more we are distracted.   While people are waiting to be saved, they are neutralized and don’t notice their rights being taken away. This applies to Christians or ET fans.  Waiting to be saved is what sheep do, not sovereign people into awakening NOW and confronting the money changers NOW.

I think crop circles are another New World Order operation. That is what my intuition tells me.

Is there ET?  Of course! So what?!!!! They aren’t going to save anyone from their own karma. What they may be doing now is trying to intervene in this civilization’s karma because ‘they’ have always been here and this is their planet too, and we are destroying it. Even the Pope is whining about it, without being able to admit that centralization is the enemy of diversity, and only if we support diversity will the biosphere survive. To do that we must end centralization and hierarchies, like his.  By the way, he really is the last Pope.  Did you read that he endorses biological evolution and Creator God in same document? There is no foundation any more for his authority.  Who is the Pope to guide anyone when he backed the regime that murdered thousands in Argentina?  He will be outed as a criminal and a hypocrite.  The sheep will wake up and bye bye Catholic Church.

I was thinking about converting Satan, but I was mistaken in my understanding.  I had this “realization” that Satan is a group, which makes it worse. If Satan were one entity, we could easily over come that being and turn him/her.  There is a group and their CULTURE is satanic. They are committed to using others and enjoy causing harm.

“We” are a group being attacked, used, by another group.  There is a parasitic force on this planet and it is connected with Egypt. I am not like David Wilcock who got famous by promising pie in the sky, and didn’t “ascend” in 2012 as he promised. Unlike David, I don’t care about tracing history back to past planets, which are endless, so what is the point?  David came out against Banksters. That was fantastic. By the way his last life was Edgar Cayce. David lives in unsustainable LA.

Anyone who talks in terms of global anything, HATES indigenous peoples and wants to convert them all to THEIR order. Their peace means everyone else conforming.   So you can see why I broke from group, a parasitic group that has the vain idea they were above it all and were guides.

Last, to Joey.  “Universal peace” is an oxymoron. Think about it.  The only thing universal is change, and change is not peace.  Greer is deluded by ego.  The ego believes in ends, while the greater part of us doesn’t need to believe anything, we just DO.  Believing in goodness prevents a lot of people from DOING goodness. They are too comfortable believing.

There will never be universal anything accept diversity rubbing with diversity, which isn’t peace.

The glorious future in Greer’s ego will never happen. There won’t be one future. There will be diversity.

Well, you all consider many views, and if you want you can consider mine.