We begin with a letter from myself to K, a New Age apologist for Islam, though he denies that he is an apologist, while simultaneously denying the facts about Mohammad’s insatiable sexual lust, the violence of “The Prophet’s” life, and the violence embedded in Koran.  K would be someone who uses words like “radical Muslims”.  His use of such words communicates an idea that real Islam is moderate and peaceful.

“Ms. Hirsi Ali [Second video below] warns against use of the words “extreme” and “radical” to describe as peripheral, an ideology which, she argues, is in fact quite prevalent in Muslim communities around the globe, and which leads easily to violence—whether in the form of female genital mutilation or honor killings or wife-beating or suicide bombings.

“She views the reliance on those words as self-delusion, a soothing, self-administered palliative whose effect is to mask evidence that violence is the largely natural extension of fundamentalist values, sternly dictated and widely embraced in Muslim communities—values that encourage harsh treatment of women and strict, even brutal, punishment of non-believers. Her warnings, and those of others who risk their reputations and lives to criticize Islamic institutions, are distinctly unwelcome in many Western quarters, where they are regarded as grievously politically incorrect, and where the “few-bad-apples” narrative of Islamic extremism is vastly preferred.”  – Source I am trying to figure out how to proceed with you K.

You are not a seeker that I can recognize. I sat three feet from you and let you know some other entities were present, and you weren’t curious. You appear to me to be a collector of comfortable self-stroking beliefs, and programmed to think that this is divine work, while being blocked off to the unexpected.  That is, you seem to live in a concrete bubble of studied world view.  The concrete is made of ideas.

I have reviewed below, your suggested reading, the excerpt from Norman Brown’s The Prophetic Tradition, found online.

I would like to point out the arrogance and globalist prejudice that I found within his writing, which somehow, escaped you.

Before I highlight these sentences, I will point out that the title of his book excludes prophecy in thousands of other cultures which have nothing to do with the Mideast or it’s ugly story about Adam in Genesis. Obviously, in the beginning was not the word, but the ear to hear it and the ear has no beginning. The Abrahamic traditions are false. They are mind programming, conditioning children to believe that there is an authority which we must obey that controls entire universe and that HE is separate, as apparently we should be also. That is, we are supposed to demonstrate humility before our creator god, while behaving like him and being separate and disconnected from nature.

Well, no matter, there is no such separate being. 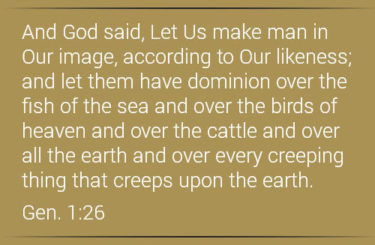 Dominion, the ugliest creed on Earth, which is unlike any indigenous understanding world wide. Thousands of diverse cultures lived within nature where other creatures are sacred and respected, and where humans are just one temporary element in an integrated and mysterious whole,  clear of explanation or beginning.

“The human race needs [one] Divine instruction and admonition; the human race like sheep is prone to stray and is brought back to the right path by another manifestation of the one true voice of prophecy.”

“…. the one true prophet, form age to age, from the beginning of the world; Adam, Noah, Abraham, Moses, Christ, Muhammad….”

“Islam represents a return to the original Mosaic theocratic or theopolitical idea. The Kingdom of God is a real Kingdom on earth. The dualism between temporal and spiritual regimen is rejected; the concessions to Caesar (or Constantine) are abrogated. Prophetic revelation has to replace Roman law with its own law: “The Law, which is the constitution of the Community, cannot be other than the Will of God, revealed through the Prophet.”

“The Prophetic movement then has to be a political revolution [against what is natural and diverse]: Muhammed is the prophet armed. [!] Islam committed by the Hegira and the take over of Medina to the seizure of power. At the same time the Mosaic theocratic idea is freed from its national (ethnic) limitations and given new and revolutionary content as a program for instituting theocratic world-government.” [!]

“The glorious idealism of Dante’s De Monarchia, Book I, is pure Islam; “Of all things ordained by our happiness, the greatest is [the impossible] universal peace [impossible universal stasis, imagined as free of movement or friction]”; …..   [See my article on this]

“Muhammad toward the end of his life called on the empires of the world to submit to the rule of God. Prophet against Empire, but Prophet Armed.”  [He called on them, or warned them they would submit or be destroyed?]

Well, so much for the “religion of peace.”

I need not review this globalist monotheistic unnatural hegemonic work further. It is vain arrogant delusion.

I am amazed you sent me such dogmatic violent oppressive vanity as your exposition of ‘true Islam.’ This is what you recommended for me to read to give me a true understanding of Islam!   Indeed, I did gain that.

Five minute video explains the actual history of Jihad with over 500 battles in Europe.

Ayaan Hirsi Ali is a heroic spokeswoman for critical thought in examining the real Islam.  Click on image below to start video.

Below, 40 minute video proving that the true nature of Islam is war.

Below, 9 minutes from ex Muslim woman, explains jihad and how Mohammad is role model today for atrocities.

Below, the wonderful psychologist, Wafu Sultan. 11 minutes. She cries telling story how her niece age 10 was forced to marry a man of 50 years. The niece later killed herself.