Most accounts of the attack on the USS Liberty off the coast of Gaza in 1967 blame the Israelis. Then President Johnson is blamed for abandoning the ship, in order to not embarrass ally Israel for it’s “mistake.”

However, Johnson is quoted as saying “I want that goddamn ship going to the bottom! No help, recall the Wings.”  He did not just say, “stay away,” he stated his intention. He wanted the ship to be sunk. The submarine USS Amberjack had escorted the Liberty all the way from West Africa. The Amberjack saw everything that happened, but did not aid the Liberty at all. Also recall that just three years before , the USS Maddox was NOT attacked in Gulf of Tonkin, but U.S. declared war on North Vietnam using the controlled media, claiming there was an attack.

For an 8 minute synopsis of what happened on June 8, 1967 and an introduction to false flag attacks, see this next video. Gulf of Tonkin is discussed.  Then we will meet a USS Liberty survivor and hero whistle blower, with new information.

Richard Larry Weaver, who was on the deck of the Liberty when it was attacked almost 50 years ago, has suffered 34 surgeries and still has 60 pieces of shrapnel in his body. He has been in pain for almost 50 years. The Veterans Administration tried to deny him benefits, and changed his paperwork to deny he was ever on the Liberty. He had to fight for any help he got. Through his own investigation, Larry discovered that the submarine USS Amberjack fired the torpedo that hit the Liberty, not an Israeli torpedo boat. You will hear his testimony below. Only 2000 people had seen the youtube below, before I posted this. If you have been in the military or know someone who has, I ask you please to share this post with everyone you know. We have to ask, who are we serving?

Just as the Gulf of Tonkin incident was falsified so that Johnson could declare war on North Vietnam, a false flag attack on the Liberty was going to be blamed on Egypt. It is most likely that the attack was run by an international group who controlled both the USA and Israel. Five years later, the Bilderberg Group discussed what to do with the glut of petro dollars which Saudi Arabia would need to invest somewhere. They had this discussion 5 months before the price went up!  The Bilderberg group was in on the plan for the 1967 Yum Kipper war and the price increase. Did they plan the 1967 attack on the Liberty?  What we know for sure is that the U.S. and Israel acted together, not separately that infamous day, and to blame Israel alone is naive. It would also be naive to think that Johnson wanted a war with Vietnam on his own, or that he wanted a war with Egypt on his own. The international bankers created UN, Israel, the FED.  Who told Johnson what to do that day? 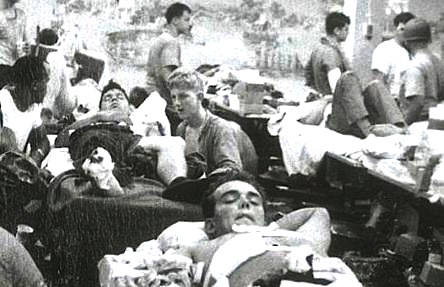 The first photo to right is the injured US seamen after the June 8, 1967 attack on the USS Liberty. The injured man in foreground is Richard Larry Weaver. In second photo below  is Larry on Maui with author Ray Songtree three years ago. Please listen to Larry’s account of what happened the day of the attack and his later investigation in youtube below. Thanks to website Federal Jack for producing this youtube. See link.  Here is another interpretation of what happened that day. 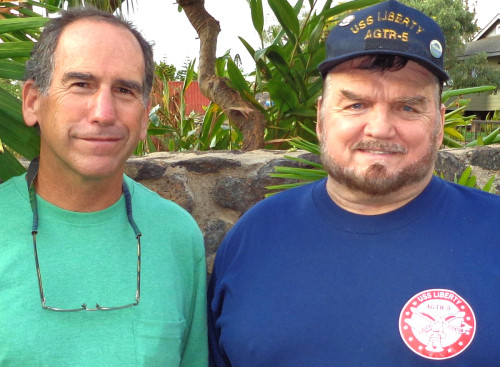 Veterans need to ask. Is one really a hero to serve treasonous liars? At what point since the 1964 Gulf of Tonkin Incident, which was excuse to kill 3 million people in Southeast Asia, has our government ever become honest?

Is it patriotism to serve a flag run secretly by Globalists who care about nothing but their own power? Is it patriotism to be cannon fodder or to live with guilt the rest of your life?  There are 22 veterans every day killing themselves because they know they were not “heroes” and saw and did things they cannot be proud of. Who are we serving? It is time to ask questions. It is time to be very brave, like Larry, and find out the truth.

Next, the testimony of Richard Larry Weaver. Here he discusses the USS Amberjack torpedo.  Links to two more interviews below. 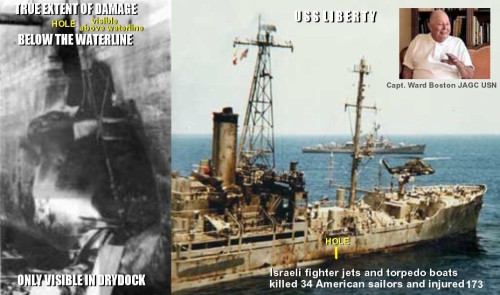 Fifteen years after the attack, an Israeli pilot approached Liberty survivors and then held extensive interviews with former Congressman Paul N. (Pete) McCloskey about his role. According to this senior Israeli lead pilot, he recognized the Liberty as American immediately, so informed his headquarters, and was told to ignore the American flag and continue his attack. He refused to do so and returned to base, where he was arrested. Later, a dual-citizen Israeli major told survivors that he was in an Israeli war room where h

e heard that pilot’s radio report. The attacking pilots and everyone in the Israeli war room knew that they were attacking an American ship, the major said. He recanted the statement only after he received threatening phone calls from Israel.

The pilot’s protests also were heard by radio monitors in the U.S. Embassy in Lebanon. Then-U.S. Ambassador to Lebanon Dwight Porter has confirmed this. Porter told his story to syndicated columnists Rowland Evans and Robert Novak and offered to submit to further questioning by authorities. Unfortunately, no one in the U.S. government has any interest in hearing these first-person accounts of Israeli treachery.

Key members of the Lyndon Johnson administration have long agreed that this attack was no accident. Perhaps most outspoken is former Chairman of the Joint Chiefs of Staff Admiral Thomas Moorer. “I can never accept the claim that this was a mistaken attack, ” he insists. Former Secretary of State Dean Rusk is equally outspoken, calling the attack deliberate in press and radio interviews. Similarly strong language comes from top leaders of the Central Intelligence Agency, National Security Agency (some of whose personnel were among the victims), National Security Council, and from presidential advisers such as Clark Clifford, Joseph Califano and Lucius Battle.

A top-secret analysis of Israel’s excuse conducted by the Department of State found Israel’s story to be untrue. Yet Israel and its defenders continue to stand by their claim that the attack was a “tragic accident” in which Israel mistook the most modern electronic surveillance vessel in the world for a rusted-out 40-year-old Egyptian horse transport. Despite the evidence, no U.S. administration has never found the courage to defy the Israeli lobby by publicly demanding a proper accounting from Israel.

Remember, the USS Amberjack fired the torpedo. Israel will never admit anything because Israel works for the same Globalists that Johnson worked for. They have already said their torpedoes missed.